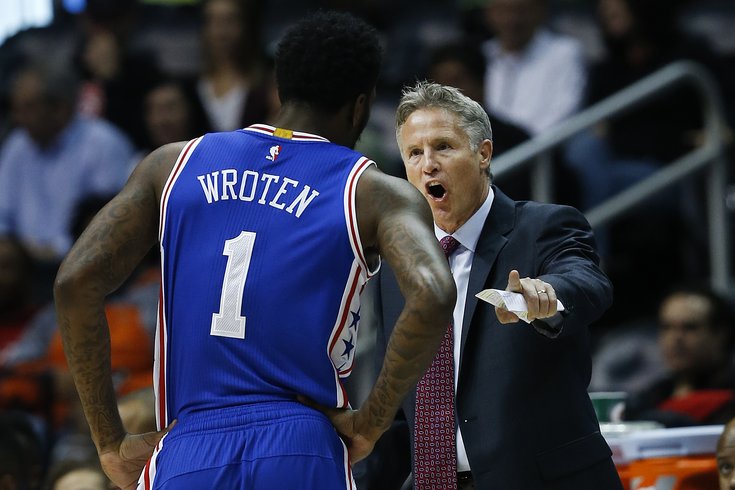 The Philadelphia 76ers are the perfect team to play if your team is trying to break out of a slump, like the Atlanta Hawks did on Wednesday night with their 127-106 victory at Phillips Arena. Atlanta had lost three straight and six of its last 10 heading into their matchup with the Sixers. In their previous three games, the Hawks averaged just 86.7 points.

Against the Sixers, they had 102 by the end of the third quarter.

Is your team mired in a losing streak? Do you fail to win, no matter how hard you try? Well, you're in luck ... because there's a full-proof* solution! Just schedule a date with the Sixers and you'll be winning in no time.

*Complications may arise if Kobe Bryant is in your starting lineup.

Sixers. When you win, we win.

With the loss -- which featured a season-high 127 points for the Hawks -- the Sixers fell to 1-26 on the season. Here's some of what stood out in the game.

•    The Hawks' losing streak wasn't the only streak that came to an end in Atlanta. Rookie Jahlil Okafor's streak of four straight 20-point games was snapped as the big man finished with 19 points (7-12 FG, 5-6 FTs) and seven rebounds in 30 minutes. Okafor easily could have extended the streak, but with the Hawks up big in the fourth quarter, coach Brett Brown decided to rest his starting center.

The team continued to struggle with Okafor on the floor, as he finished with a minus-23 rating, second only to Robert Covington (-24). Interestingly enough, JaKarr Sampson finished with a plus-15, despite the fact that his team lost by 21 points, in just 18 minutes.

You're not going to win many games when your opponent shoots with that much efficiency. And the Sixers didn't help themselves out, as the Hawks had open looks all night long.

•    Paul Milsap led the Hawks with 21 points. Meanwhile, Dennis Schroeder finished with a game-high plus-25 ... in just 23 minutes. He finished with 17 points, seven assists and three steals.

•    Forward Nerlens Noel was out of the lineup for the second straight game after suffering a corneal abrasion against the Raptors on Sunday night. However, the news out of Sixers shoot around Wednesday was better than some initially feared. According to John Finger of csnphilly.com, Noel thinks he could be ready for Friday's game against the Knicks, although he'll still have to be wearing the goggles he was sporting during his light workout.

“I have some blurred vision that’s getting better every day,” Noel said. “There’s not much pain at all. I’m just getting my vision back.”

Noel did not attend Monday’s game in Chicago because he was suffering from some light sensitivity that the bright arena would have aggravated. He also had to use eye drops every hour after the injury so sleep was a bit difficult. [csnphilly.com]

•    Kendall Marshall is the Sixers starting point guard, according to coach Brett Brown. After starting a different guy each of the last three games -- Marshall, T.J. McConnell and Tony Wroten -- Brown said Wednesday that the role was Marshall's "job to lose." Against the Hawks, Marshall was 7 points (3-6 FG) and four assists (and four turnovers) in 15 minutes. Wroten finished with 12 points (4-10 FG, 3-5 3PT) in 16 minutes, but failed to record an assist while committing four turnovers of his own.

•    Get used to a lot less T.J. McConnell -- assuming Marshall and Wroten don't play as poorly as they did against the Hawks. With them both in the lineup in Atlanta, McConnell played just 17 minutes, his second-lowest total of the season. As the health of the other two point guards nears 100 percent -- and their playing time continues to increase -- there just aren't going to be many minutes for the rookie from Arizona. In 26 games this season heading into play Wednesday, McConnell was averaging 7 points, 5.4 assists, 4.7 rebounds, 1.3 steals, and 2.4 turnovers in 25.9 minutes per game.

•    Isaiah Canaan led all scorers with 24 points, in a game-high 31 minutes. He shot 7-of-12 from the field and a stellar 6-of-8 from three, and finished with a plus-six. All things considered -- the score, the fact that he played 31 minutes, etc. -- is pretty impressive.

The Sixers return home on Friday to take on the New York Knicks (11-14) at The Wells Fargo Center. The last time these two teams met (Dec. 2 at Madison Square Garden), the Knicks came away with a 12-point win, 99-87, as rookie Kristaps Porzingis put up a game-high 17 points and 10 rebounds. Tip from South Philly is set for 7 p.m.