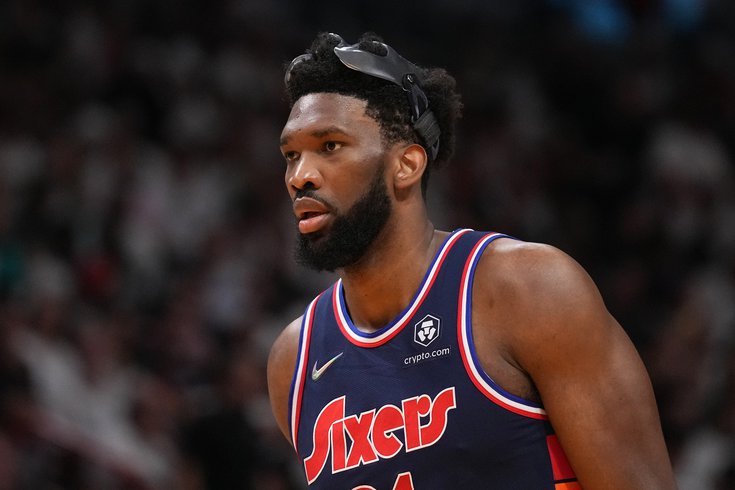 Roughly 40 minutes before Friday's tilt against the Knicks, Sixers center Joel Embiid took the floor to cheers from the home crowd, a sign that he was ready to go after missing time due to illness. It was all downhill from there. Embiid would slog through a short workout before heading back to the tunnel, and with 15 minutes before tip, the word came down that he would not be available.

On a night where they lost by just two points to the middling Knicks, it's fair to say Embiid's availability was the difference between a win and a loss. And while it sounds like the next two days off provide enough of a runway to get him back on the floor, the focus appears to be preserving him for the big moments rather than trying to steal more wins in November.

"Watching him in shootaround, I thought he was really struggling," Doc Rivers said Friday night. "He went through like 25 percent of shootaround this morning, you can see he wasn't feeling great. Showed up, went out on the floor, got shots, and just felt bad.

"Obviously, we want to win the game, and putting him on the floor would obviously help us. But we got to also think of the long game as well, and so I thought it was the right decision not to play him."

With perfect circumstances on a non-Embiid night, the Sixers have enough to win, and enough to win against good teams, as we saw in a rip-roaring performance against the Raptors a week prior. Over the next month, the issue is navigating those moments without the services of James Harden, who is likely out for a month as a result of a foot tendon strain.

According to Rivers, a month without Harden is a blessing compared to what they initially feared, when Rivers to his office postgame to a room with Daryl Morey and Philadelphia's head of medical. Whether you're a believer in Harden as a championship-winning player or not, it's fair to say any sort of long-term injury to him would sink the Sixers, leaving them with slim-to-none odds to compete for a title. But a month from Nov. 3 puts Harden on track to miss 13 more games, putting the pressure on everybody else to play their best basketball. In Embiid's case, playing at all is the place to start.

Illness has been the most recent culprit, but after we learned following some early-season struggles, managing plantar fasciitis and not pushing Embiid too hard is also a top-of-mind concern for Philadelphia. Though it is not the reason for his recent absence, Rivers indicated on Friday that it is still a factor, and something they have to consider as they try to ramp him back up.

"It's tough for him to condition when you have a foot [issue], you know what I'm saying? We do have things with the pool and the Alter-G [treadmill] which you can run with no weight-bearing stuff," Rivers said. "But first he has to get healthy enough to breathe from the flu so he can get back to running. That's why we just have to be very careful in this stretch coming up. Again, we've got to think about the long game."

Without being overly alarmist about a slow start in October and early November, the long game does hinge somewhat on the short game. In the history of the NBA, there are only two teams who managed to win an NBA championship without finishing as a top-three seed in their conference: the 1969 Boston Celtics and the 1995 Houston Rockets. To put it lightly, the Sixers are nowhere close to a Celtics group that won 10 championships in 11 seasons, or even the repeat Rockets who reshuffled their roster midseason and captured back-to-back titles. And while saying "better regular season teams perform better in the playoffs" isn't exactly rocket science, we can safely say that constantly having to win important road games as a lower seed hampers your ability to make a deep run.

In the coming week, they have dates with the 6-2 Suns, two games against the 5-3 Hawks, a meeting with the surprising Utah Jazz, and then a break between the Utah game and their second battle with Milwaukee of the season. It is not out of the question that they could lose all five of those games, given their current form and health, pushing them into double-digit losses as soon as November 13th. Embiid getting his legs under him is a necessity, not a luxury.

The shame of the early season is not Philadelphia's record, though, but the lack of a coherent two-way identity because of the lineup shuffling. Offensively, they've been about where we've expected them to be, a top-five group in efficiency prior to Friday night's shorthanded loss to the Knicks (they still sit inside the top 10 following that horrid shooting night). But after three quarters of relatively clean-looking offense, the Tyrese Maxey-led Sixers melted down in that fourth quarter, running stagnant, movement-free offense when it mattered most. Insofar as they have an identity, it's that they have stars creating one, and the players left to pick up the slack could feel the unfamiliarity of the group down the stretch.

"With James out and Joel out, it was one of those things where we really didn't know what we needed to get into to get some quality looks on the offensive end," Tobias Harris said Friday. "We could have been a lot better."

"It's the first time this group kinda has played this type of minutes with these guys being out," De'Anthony Melton added Friday. "We've got to keep building chemistry and keep getting better...We felt like this was definitely a winnable game no matter who we had out there."

Rather than the rip-roaring unit some of us in the media (and many of you at home) thought they might be, the Sixers of the opening 10 games have been what their biggest skeptics guessed — oft-injured, directionless, and defensively challenged for various reasons ranging from the effort to personnel. There's an abundance of time to turn it around, but until they can get their best player on the floor and keep it there, expect more wheel-spinning performances where we learn very little about their ultimate ceiling.