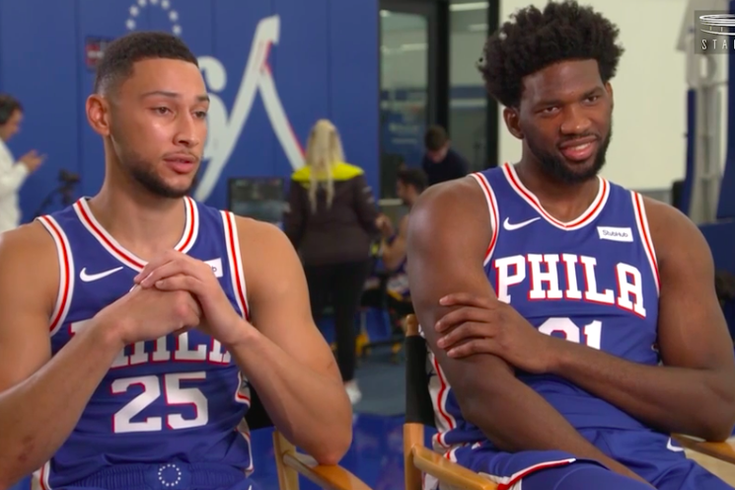 Sixers stars Ben Simmons and Joel Embiid are on the same page about the team's ultimate goals this season and beyond.

Much has been made about whether or not the combination of Joel Embiid and Ben Simmons is a viable basketball fit for the Philadelphia 76ers to compete for a championship.

That talk has always been somewhat premature, as both guys are 25 or younger and are still improving in every facet of their respective games.

As individuals, they're very different sorts of people. Embiid is more of the team joker and Simmons comes across as a serious A-lister.

The Sixers duo recently sat down with Shams Charania for a Stadium interview in which the two discussed their relationship, the sting of Kawhi Leonard's Game 7 shot and the team's path forward.

"We're just getting started," Simmons said. "And I'm excited, because I put a lot of work in this summer. This is the best summer I've had since I've been in the league. I'm just ready to work."

"It's a great deal of pressure, which I love," Embiid said. "It adds a lot of responsibilities as far as being leaders and pushing the team forward."

Both players talked about setting an example and keeping a high standard for the rest of the team.

"I think over the past year we've both matured a lot more," Simmons said. "Not just our game. Our mindset."

The two All-Stars agreed they lead different lives off the court. Simmons is more of a high-profile celebrity athlete, while Embiid prefers the simple joys in life.

"I like to be chillin'," Embiid said. "I don't do anything. I just like staying home, playing video games, hanging out with my girlfriend and my dog. We're a little different in that aspect, but we know, it's competitive, I am, and we bring that intensity."

The focus of both of the team's star players is to win a championship above all else. In terms of NBA legacy, that's what Embiid and Simmons want to leave behind.

"At the end of the day, it doesn't matter if you don't win it all," Embiid said. "You've got to win it all. I mean, you look at guys like, for example, Charles Barkley. You know, he had a great career, but everybody always looks at him like, 'Where's your championship?'"

The Sixers will get their title campaign started on Oct. 23 when they open the season in Philadelphia against the Boston Celtics.