Sixers jump out to early lead, beat Pistons by 20 points 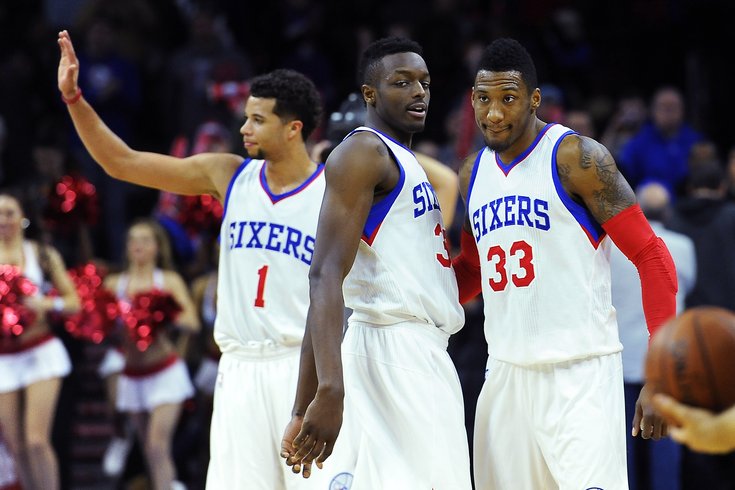 The Sixers got out to a big lead against the Detroit Pistons on Wednesday night and were able to hang on for a 89-69 win in front of the home crowd at the Wells Fargo Center.

The Pistons' 69 points are the fewest allowed by the Sixers all season. Here's a look at some other things that stood out:

Perhaps the best thing to come out of the Sixers racing out to a 24-4 lead - thanks to an 18-0 run - was the fact that it helped put Pistons center Andre Drummond in early foul trouble.

Drummond was limited to just 19 minutes in the game, which allowed Philadelphia to keep up with the Pistons down low. Had it not been for his absence most of the game, Detroit could have easily caught the Sixers. As it was, the Pistons were only able to cut it to nine midway through the fourth.

After going seven-plus minutes without a field goal in the first, the Pistons were able to end the quarter on an 8-0 run, ending the quarter down just 12 points, 28-16.

It's dead up in here. Kind of like the #Sixers fans don't believe their team will maintain this lead. They are up 34-20 w/ 9:13 left in half

Luckily for Sixers fans, this was one of the few times Keith has turned out to be wrong.

After missing Monday's game against the Pelicans due to an illness, Michael Carter-Williams returned to the lineup Wednesday and got off to a hot start.

The second-year guard finished just shy of a triple-double with 14 points, 10 assists and 9 rebounds. He did, however, finish with a team-high six turnovers.

The Sixers' win over the Pistons was almost the exact opposite of what happened the last two times these teams met 11 days ago. With that in mind, this category is going to be broken into smaller sub-categories highlighting the differences.

Last game: Singler led all scorers with 20 points (6-for-8 from three).

This game: Singler fails to score (0-for-2 shooting in 19 minutes).

Singler also scored 21 points in the teams' other meeting this season, a 108-101 OT win for the Sixers back in December.

This game: 6 points, 7 rebounds, 1 block in 19 minutes due to foul trouble

*Jennings is out for the season after undergoing foot surgery.

This game: Sixers score 89 points, and hold Pistons to just 69*.

*If my math is correct, that's a difference of 38 points. It's mainly because Detroit shot just 30.7 percent on Wednesday.

Monroe can't do it alone

While Greg Monroe had himself a game (20 points, 11 rebounds), it was obvious that he wasn't nearly as effective without his normal frontcourt partner, Andre Drummond, who was on the bench for most of the game. The Sixers outrebounded the Pistons 48-38, which wouldn't have been possible had Drummond not been in limited to 19 minutes because of foul trouble.

When the Pistons cut the Sixers' lead to nine (72-63) with 7:46 left in the game, just after Stan Van Gundy inserted Drummond back into the game, it looked like the Sixers might be in trouble.

Not the worst team ever

With the win, their ninth of the season, the Sixers have officially eliminated any chance of holding the NBA record for fewest wins in an 82-game season. Well, the 2014-15 Sixers anyway. That record currently belongs to the 1973-74 Sixers, who finished 9-73.

Sure, they could lose out and share the record, but there's no way that happens... right?

Wroten to have ACL surgery

Tony Wroten met with reporters before the game to say that he's elected to have surgery to repair his partially-torn ACL, saying that he  can't play his style of basketball with that kind of injury.

It was also revealed prior to the game that Carter-Williams and Nerlens Noel have been selected to play in the  NBA Rising Stars Challenge. Carter-Williams also played in the game, which is part of all-star weekend, last season as a rookie.