What they're saying: Sixers-Raptors goes to Game 6. Sound the alarm? 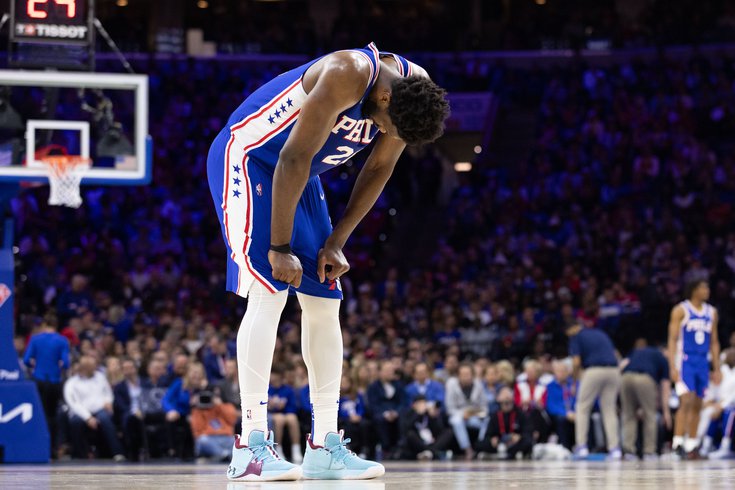 Joel Embiid and the Sixers have to head back to Toronto for Game 6 after being up 3-0 in the series.

They got embarrassed in Game 5, both by the Raptors and themselves, and now have to go back to Canada for Game 6.

How confident you feeling that they can close this out?

After back-to-back defeats, and three straight games where the Sixers were visibly outplayed, the vibes around town aren't great.

"Look, I am not saying the Raptors are going to come all the way back in this series. They have the harder task ahead of them still, and one good shooting night is all it might take for Philadelphia to move on to the next round. But you're lying to yourself and to me if you tell me you're not worried right now."

There are plenty of reasons to worry, and you can read up on all of them with Kyle's observations HERE and his morning-after analysis HERE.

There's a lot being said around Philly and the rest of the basketball world too. Let's take a look.

If you're not big on Doc Rivers — a lot of fans aren't — then this stat is probably gonna validate your thinking. After Monday night, Rivers has lost seven of his last eight chances to close out a series and is the coach with the most losses in clinching games in NBA history.

Doc Rivers has now lost 7 of his last 8 opportunities to close out a series.

His 31 such losses in those games are already the most by a coach in NBA history. pic.twitter.com/YE8gXzDOMq

The Raptors are taking a shot at the impossible too. They became the 14th team in league history to force a Game 6 after being down 3-0, and will push to become only the fourth to reach Game 7 and the first ever to complete the full comeback.

The Raptors are the 14th team all-time to force Game 6 after trailing 3-0 in the series.

Looking ahead, only 3 teams in NBA history have forced Game 7 after being in that situation (most recently in 2003 Trail Blazers), but none of them rallied to win the series. pic.twitter.com/8IQRBxI2ef

Barkley: 'They're not gonna win Game 6'

Charles Barkley | Inside the NBA

Charles Barkley sees the writing on the wall. If things don't change fast, the Sixers will have to play a Game 7 with all the pressure on them.

During Monday night's TNT broadcast, the former Sixer criticized Joel Embiid and James Harden for flat performances and a lack of leadership in Game 5.

The Sixers had two chances to close the series out. They didn't. Pressure's on.

What's happening now...they're not gonna win Game 6 in Toronto. By the time they get to Game 7, them sphincters gonna be so tight...I'm telling you...there will be so much pressure on them boys in Philly for a Game 7." [TNT]

The Sixers were thoroughly outplayed in Game 5. There's no disputing it. The Raptors were the better team in Game 4, and if it weren't for Embiid, Game 3 too.

They need to wake up and adjust. There's concern that they won't.

"Maybe the onus is on Doc Rivers. Maybe it is on James Harden himself. Most likely, it’s on both. The Sixers are suddenly two losses away from becoming the first NBA team to ever blow a 3-0 lead in a series, and the two guys who should best recognize imminent postseason failure don’t seem to see it coming.

The only thing riper than the pre-soak-and-high-temperature-wash pants-wrecker the home team laid on Monday night was the sense of denial that permeated the postgame interview room. The Sixers understood just how bad they were, don’t you worry. It’s just that they seemed to believe that avoiding a similar fate in Game 6 would not require much intervention on their part." [The Inquirer]

Nothing to cheer about

Recent Sixers history is full of heartbreak. If things stay the course, this one could become another.

The Wells Fargo Center crowd tried to snap the team out of it, but the Sixers gave them nothing.

From The Athletic's Rich Hofmann:

"The last time the Sixers played a Game 5 in Philly, they blew a 26-point third-quarter lead to the Atlanta Hawks en route to a shocking series defeat. That night, a stunned crowd filed out of the Wells Fargo Center unaware that an even bigger gut punch was coming the next few days.

Monday night’s convincing 103-88 loss to the Toronto Raptors was a different type of pain, a slower drip. Unlike the blown lead against the Hawks, the Sixers’ home-court advantage turned into a decided disadvantage for all 48 minutes against Toronto. The players heard boos constantly throughout the game, which is more typical of a mid-February game when the crowd is trying to wake the team from its slumber. The Sixers, with everything to play for in a closeout playoff game, just didn’t give them anything to cheer for." [The Athletic]

One of the biggest fears from the James Harden trade has come to the forefront: His playoff disappearing act has kicked in.

Does that make him a liability for the Sixers? Kendrick Perkins thinks so. Harden just can't take over a game like he used to.

Former sharpshooter JJ Redick has a different perspective. Speaking on ESPN's First Take Tuesday morning, Redick argued that much of Tyrese Maxey's success in the series was because of the attention the Raptors paid to Harden.

He isn't the same player he was in Houston or Brooklyn, but Redick doesn't think that means Harden is completely ineffective.

"How many times did we see over the first two games just a quick swing pass to Maxey where he's got a lineup three or he's able to attack a closeout.

James Harden is not a liability, Perk. Is James Harden the same player that we saw in Houston or pre-hamstring injury in Brooklyn? No, he's not.

Redick does have a concern, though, things only get tougher for Harden matchup-wise should the Sixers advance past Toronto, especially against Miami.

From the other side

Toronto sees what's going on here too, and they're beginning to eye up NBA history.

As TSN's Josh Lewenberg writes, the Raptors are beginning to believe.

"Belief is a powerful thing, and the Raptors believe they can do something that’s never been done before.

They believe they can make history, and the scary thing for Philadelphia and its tortured fan base is that the Sixers may be starting to believe it as well." [TSN]

The perspective from the Toronto Star's Doug Smith:

"It was rather amazing – not surprising, but amazing – to watch the Philly fans in the arena turn on the team like that did.

The first smattering of boos came in the first quarter and the crescendo in the fourth quarter was really quite something.

It was because the Raptors just played better and harder all night and the Sixers showed a distinct lack of fight.

Now, it’s only two games and Toronto still needs to do something that’s never been done in the history of the league but the margin by which the Raptors out-played the Sixers last night certainly makes one believe anything can happen." [Toronto Star]

Laugh through the pain, right?

Ben Simmons and Doc Rivers meeting up in the Sacramento Kings locker room this Summer. pic.twitter.com/fHF47eFSPr

Game 6 is Thursday night in Toronto.