The defendants, led by Terrence Williams, allegedly submitted a combined $3.9 million worth of fake invoices 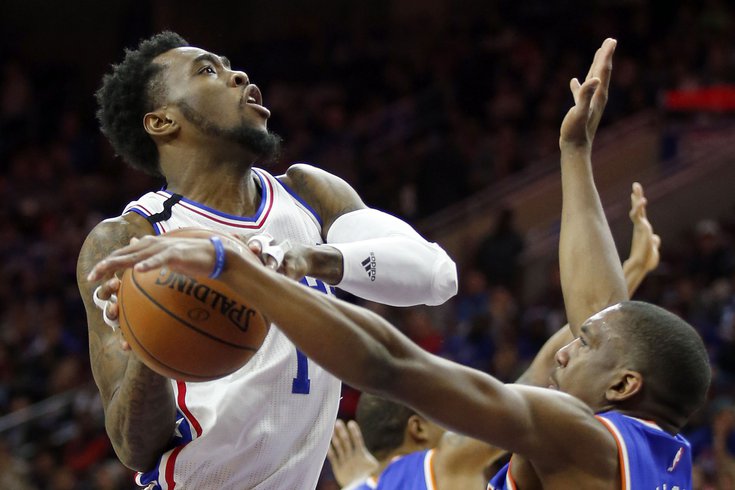 Former Philadelphia 76ers guard Tony Wroten is pictured during a Dec. 2015 game against the New York Knicks. Wroten is among 18 former NBA players facing federal charges in an alleged scheme to defraud a NBA healthcare plan.

Federal prosecutors in New York charged 18 former NBA players on Thursday with defrauding a supplemental health care program of more than $2.5 million. The defendants allegedly participated in a scheme to submit false invoices for services they never received, pocketing the money and sometimes giving kickbacks to the mastermind behind the conspiracy.

Among the former players charged Thursday was Tony Wroten, a key figure of the Philadelphia 76ers' lean Process years during the middle of the last decade. Wroten, 28, played three seasons for the Sixers between 2013-2016, putting up respectable scoring numbers on otherwise feeble, tanking teams.

At a press conference on Thursday, prosecutors from the U.S. Attorney's Office from the Southern District of New York spelled out the charges against the 18 former players and one of their wives.

Anthony Allen's wife, Desiree, also was named as a defendant.

According to prosecutors, the scheme began around Nov. 2017 and was devised by Terrence Williams, the former 11th overall pick in the 2009 NBA Draft.

Williams allegedly exploited the NBA's Health and Welfare Benefit Plan, a program primarily funded by NBA teams to assist both active and retired players and their families with medical, dental and other wellness services.

As the leader of the conspiracy, Williams allegedly obtained fake invoices for services that were never rendered and provided those invoices to the other defendants to be submitted to the health plan. The claims on the invoices ranged in value from $65,000 to more than $150,000, prosecutors said.

In total, the invoices amounted to approximately $3.9 million in fraudulent claims, of which about $2.5 million was paid out to the defendants. In many of these cases, prosecutors said Williams would receive a kickback from his co-conspirators once the funds were dispersed, collecting an additional $230,000 for his role in arranging the scheme.

During the course of the investigation, prosecutors found that many of the defendants had been nowhere near the places of service on the dates listed on the invoices they submitted.

The defendants each have been charged with one count of conspiracy to commit health care and wire fraud. By Thursday afternoon, 16 of the 18 accused players had been taken into custody.

U.S. Attorney Audrey Strauss said certain aspects of the alleged scheme were sloppily executed, including some instances in which invoices listed the same procedures on the same days for different co-conspirators.

Wroten and Allen again submitted invoices in Sept. 2018 for more root canal work to be done on another 13 teeth — the same for both men on the same day.

Strauss also said the some of the invoices were suspicious and were not printed on letterhead. They allegedly contained grammatical errors and unusual formatting.

The case has similarities to another scheme that was uncovered among former NFL players taking advantage of the league's Player Health Reimbursement Health Plan, a program that covers the cost of expensive equipment including hyperbaric oxygen chambers, ultrasound machines and electromagnetic therapy devices.

Federal charges were filed against 10 former NFL players in December 2019, including former Philadelphia Eagles running back Correll Buckhalter. The defendants were accused of submitting false claims for about $3.9 million in equipment, of which the plan paid out approximately $3.4 million.

Wroten only played a portion of one more season in the NBA with the Memphis Grizzlies after his stint with the Sixers and has been out of the NBA since 2016. He continued his basketball career in the NBA's G League and later competed internationally with teams in Estonia, Poland and most recently last year in Spain's Liga ACB.