On Thursday, the Sixers were back on the court inside the gym at Stockton University on a rainy afternoon in Galloway Township, New Jersey for the first of two practice sessions on day three of training camp. Here’s what I saw:

•    This was the closest scrimmage of the three days. Here are the teams, followed by some video Ben Simmons getting a three-point play off a feed from Nik Stauskas:

Simmons also had a couple of turnovers and wasn’t able to make two free throws with a chance to tie late. Saric, who I wrote about for earlier today, won the scrimmage for his team late by making a jumper off a dribble handoff:

Dario with the jumper. #Sixers pic.twitter.com/GMNRPmuNR7

•    I’ll have more on Rodriguez for tonight or tomorrow morning, but “El Chacho” has stood out in the little I have gotten the opportunity to watch. He’s never going to be a great defensive point guard, but man, Rodriguez can run a mean pick-and-roll. Even if the Sixers aren’t a very good team this season, I would bet that the addition of the veteran Spanish point guard will in part make them eminently more watchable.

Here he is knocking down a three in transition, courtesy of Simmons:

•    Gerald Henderson (pictured above) will wear the same No. 12 that his father wore in Philadelphia, but let’s not get too sentimental about it. Henderson said that he really wanted to wear No. 9 (which he wore in Portland and Charlotte), but Saric already had dibs on that one.

•    Brett Brown described the drive home from training camp last season as “frightening.” The season sure as heck was at times.

“I remember driving back to Philadelphia last year, knowing in my heart of heart that this group is going to be challenged,” Brown said. “We really didn’t know who the point guard was. We came in extremely injured. We were trying to make the Nerlens-Jahlil thing work. There really weren’t a lot of veterans to work around. And you knew it.”

This year, Brown believes he’ll have a completely different feeling on Friday’s drive home, one filled with hope. We’ll see if that actually translates into more wins.

•    Today’s injury report: Jahlil Okafor (knee), Joel Embiid (foot), and Henderson (rest), were held out of today’s scrimmage to keep their workload low. Ditto for Jerryd Bayless, dealing with a sore wrist. According to the Sixers, they will all be back on the court full-time for tomorrow’s final practice of training camp.

•    Bayless, as he has done every day here at Stockton, worked on some shooting individually with assistant coach Billy Lange after practice. If you haven’t watched much of Bayless, he has a bit of an unorthodox release:

“Joel is going to get the ball,” Bayless said when asked about the workout. “When he’s in the post and the double team comes and whatnot, I got to be ready and whoever has to be ready. So I think it’s something that will come for all of us, not just me.”

Bayless shot a career-high 43.7 percent from three last season, and he figures to get plenty of spot-up attempts this season. If he can manage to hover around the 40 percent mark, Brown, Lange, and the rest of the coaching staff would take it. 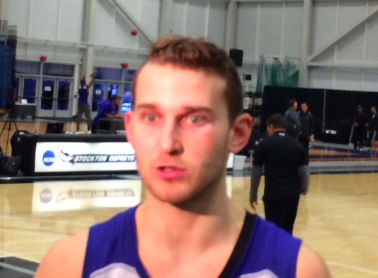 As you can (kind of) tell in the picture above, Nik Stauskas is sporting a shiner under his left eye. How did he get it? He was guarding Timothe Luwawu-Cabarrot during a drill where the Sixers were working on pindown screens, and none other than Elton Brand hit him with “that old-man veteran screen.”

•    Speaking of Stauskas, it sounds like heading into his third year in the NBA, he knows the deal.

“I can’t really make excuses anymore that I’m young, I’m trying to figure things out,” Stauskas said. “It’s time for me to make the improvements that I’ve been trying to make over the last two years and it’s time to show that. All through the last couple weeks, just being with the team and here in training camp, I’m starting show those improvements and I’m happy with the way I’m playing.”

Stauskas skipped Canadian national team duty this summer and decided to add some additional strength. He pointed out that he showed glimpses as a driver last season, and while that is true, 32.6 percent from three-point range is a non-starter for him. That number needs to be upped considerably, especially considering Stauskas should be in a perfect situation with the Sixers desperately in need of some outside shooting. Brown wants him to be a “cocky scorer.”

For what it’s worth, Stauskas has played better in the little scrimmaging we have been able to watch. He has drawn praise from some of his teammates, too. After a poor sophomore season and not so hot summer league cameo, Stauskas is going to have to prove himself this season. He’s right, there are no more excuses.