Sixers-Raptors Game 3 notebook: James Harden will be critical as series shifts to Toronto 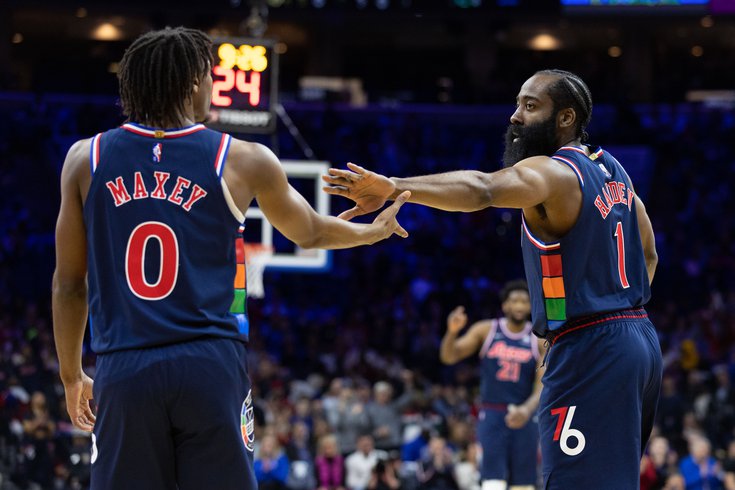 TORONTO — Can the Sixers continue beating the Raptors at their own game with the series shifting to Toronto? That's one of the big questions heading into a Game 3 that could either put this series to bed or breathe new life into Philly's foes from up north. The advantages Toronto was expected to have in this series, transition play and rebounding specifically, have been swallowed up by a Sixers team playing with competitive fire.

The onus is on Philadelphia to hold onto the rope and preserve those advantages, proving it was not a two-game fluke. Doc Rivers was slightly concerned with what he saw at the tail end of Game 2, harping on the points of emphasis that fell by the wayside in the final 1.5 quarters.

"We allowed, they were high in offensive rebounds again, we turned the ball over, and we lost our pace," Rivers said at shootaround Wednesday. "Those are the three things that can't happen, especially on the road. And then our execution I thought was shoddy a little bit. We have to get on that as well."

Second-year guard Tyrese Maxey had a slightly different explanation for what went wrong, chalking their issues up to a loss of focus in a game where they totally controlled the middle portion.

"You just got to stay locked in, stay locked in no matter what the time and score is," Maxey said at shootaround Wednesday. "Any given moment, a lead can be erased, especially in the playoffs because everybody's playing with desperation...focus on the task at hand, know that no team is out at any given moment, and keep playing your game."

For the carryovers of the 2019 series, and there are admittedly very few, they will need to do all of those things in an arena that brings back some dark memories, most pertinently the Kawhi Leonard buzzer-beater that brought tears out of multiple guys on that team. Joel Embiid's reaction is what is remembered most, but former teammate JJ Redick stood in the middle of Philadelphia's locker room after the game and swelled with emotion himself, questioning whether this was his last and best chance to win a ring.

The stakes are lower in a round 1 series, but the expectations are at that level for this group. They did not bring James Harden in to get out of the first round, they pushed their chips in to be able to punch with the big boys. And getting out to a 3-0 series lead would be a massive step in that direction, putting them in nearly unlosable territory with a chance to earn some off days. Given how beneficial the week of practice time during the play-in tournament looks in hindsight, it's not a stretch to say a quick victory in this series could materially improve their title odds.

So long as Joel Embiid plays the way he has lately — unselfish when necessary, dominant when the opportunity is there — their playoff ceiling hinges on the other guys, namely James Harden, whose value has seemed extraordinary when he's setting up other guys and dubious when he's asked to go out and get his. The head coach, though, is unconcerned with the latter part.

"I think people get all lost in his scoring numbers. We look at what James is doing, it's been unbelievable. What James brings to us is what we absolutely needed before we had James. We needed a guy who could run our team, that can get guys in space, that can make plays for our guys," Rivers said Wednesday. "It's no coincidence that Tyrese is shooting it better and Tobias, because now they're getting shots that they've been open on that no one saw. James sees them. He's been amazing for us."

Nobody is a better case study there than his backcourt partner. It's not like Maxey was having issues showing out before Harden showed up, but his post-All-Star break splits are staggering.

Maxey is shooting essentially an extra catch-and-shoot look more per game in the Harden era, and he shot a blistering 54.4 percent on those specific looks. While we can doubt the sustainability of his success there, the shot quality speaks volumes, with 23.5 percent of Maxey's total shot attempts since the break coming on looks classified as "wide open" in the NBA's tracking database.

"He makes everybody's life easier, including Joel. I think he gets Joel a lot of easy buckets just because of the attention he causes because of who he is," Maxey said Wednesday. "For myself, he does the same thing. Guys have to help, he draws it and kicks to me, I try to shoot the ball or attack downhill. Guys don't like to leave his body, so when you draw it this way, it makes it much easier."

With the Raptors expected to get the benefit of a bit of home cooking back in Toronto, Harden's ability to make life easier on everybody else will be pivotal for the Sixers to come out of here with at least a split, if not both of the pair to end the series. In a hostile environment with officiating that may have Nick Nurse's comments in the back of their minds, they believe it will helpful to have a guy who has been around the block.

"Any ATO we run, he knows what he's supposed to do before we say hey, we need you to do this. He's just a very smart basketball player," Rivers said Wednesday. "James has seen every coverage you can possibly do. I think that's been really good for Joel, because now when we talk about trapping and all the different things teams are doing to Joel, James explains it well to him."

Danny Green on playing through changes on the road: "We know they're complaining about the fouls, there's going to be a wave of change in that probably. It's gonna be tougher to be in their building, we got to make some shots there but we [also] got to stop them. We know that the whistle might not be in our favor for a couple of games over there. Either way, we got to play basketball, fight through it, and impose our will like Jo did early on. He let it be known we're not going to take the bullying, we're not going to take the BS...let 'em know, we're not going to be punked out here."

Embiid on rising to Toronto's initial Game 2 challenge: "We responded pretty well. You look at the start, they got on us pretty early, we didn't panic. We just came back and we did what worked in the first game. We just kept attacking, getting into the paint, making plays for each other and getting to the free-throw line. And then defensively, just being as physical as we were the first game."

Thybulle's absence is arguably the story coming into this game, because it's one of the only factors tilting favor in Toronto's direction at the moment. Even then, Thybulle hasn't exactly played an impactful (or even sizable) role in this series, with Danny Green's emergence helping to keep the younger forward on the bench.

The problem, though, is that Philadelphia has to replace those minutes somehow, and the options to do so are all dicey. Do you bring Furkan Korkmaz out of cold storage and hope he can give you an uneventful 15 minutes? Do you spread Thybulle's minutes across a couple of guys already in the rotation, asking more from guys like Georges Niang and Shake Milton? In theory, you could just play Green even more minutes, but then you're risking overtaxing a guy who has dealt with soft-tissue issues throughout the season, which is a problem in itself.

Thybulle's absence will be felt more if the Raptors get reinforcements, and Scottie Barnes is the big variable on the Toronto side of things. Head coach Nick Nurse was coy regarding Barnes' availability for this game, giving reporters a firm "maybe" the morning of the game. Gary Trent Jr., still battling an illness, is expected to play and start.

To put it lightly — a guy like Korkmaz dealing with Barnes, Precious Achiuwa, Pascal Siakam, and so forth would be sort of a disaster. Embiid can clean up a lot on the back end, but only so much.

(Notably, Rivers would not commit to Korkmaz or anybody else during shootaround, but he would say they have a plan. alrighty then.)

Davis is an interesting assignment for this game for one primary reason — he ranked near the bottom of the league in fouls called per game this season. That's a trend that has held across multiple years, and Davis called the second-fewest fouls of any official in last year's playoffs, so it's a fair expectation for Wednesday's Game 3 to feature fewer whistles.

On the surface, that would appear to benefit the Raptors, whose approach to defending Joel Embiid relies on sending multiple guys at him at a time and trying to set the tone physically. The big question in games officiated by more "hands off" officials is how players respond to it, both in terms of the physicality they play with and keeping their composure. After their Game 2 win, Embiid mentioned the change in mindset he has to have to respond to the style of officiating changes from game to game.

"You listen to everything that was said after the game, referees and the league, they're the same way. They're going to come in and the next game they're going to let stuff go, they're not going to call soft fouls. So in that case, you got to be more aggressive," Embiid said Monday. "You got to go to the rim with more power, you got to jump over people, you got to try to finish through contact because that's an adjustment... I've been doing this for quite a while to know that's usually the adjustment, and in that case, that's where I become more physical."

If Embiid sticks to his word on that, the Sixers will be in decent shape. Avoiding frustration is going to be half of the battle. Embiid and the Sixers are more than capable of winning a game that skews toward "play on," but picking up technical fouls and getting sucked into complaints would eat into both the advantages they've created in this series and the progress they've made on several fronts, transition defense right at the top of the list.