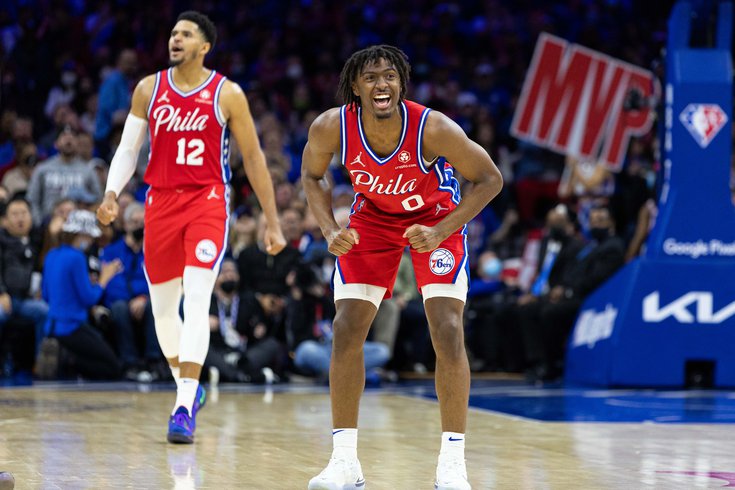 For a certain generation of Sixers fans, Allen Iverson's run in Philadelphia is the nexus point of their basketball love. Bookended by periods of total indifference, the post-Charles Barkley sludge and the pre-Process irrelevance, Iverson defined hoops in a basketball-crazed region.

It was as much about what Iverson represented as it was his actual on-court accomplishments.

Yes, he won an MVP award and did an impersonation of David slaying Goliath for one evening in Los Angeles in June 2001, but watching him play basketball just made you feel alive. He was a symphony conductor, cupping hands to his ears as nearly 20,000 people went ballistic and screamed and chanted and cheered in unison. He would blur from one end of the court to the other after a steal for a bucket like he was Nightcrawler from the X-Men.

While some (incorrectly) would mistake Philadelphians' passion for indignation, Iverson got it. He harnessed that energy, using it as a weapon at home games as much as he did his killer crossover.

As much as Joel Embiid is a god amongst mortals, turning in back-to-back seasons that should've resulted in MVP awards, there's something different, something captivating, about watching a guard go off. Maybe that's nostalgia, viewing Sixers things through Iverson-tinted glasses as I am now. Seeing a guy hit back-breaking threes and get to the cup with speed that's unparalleled on the court ignites a fire inside of me though, one that has been felt throughout the Wells Fargo Center through two playoff games this series.

This obviously isn't to immediately proclaim Maxey as the next Iverson, a player who will become one of the most memorable in the history of the sport and change basketball off the court as much as he did on it. It's about what Maxey represents, a guy who can trace his game's lineage to Iverson, possessing a skillset that's been slightly out of the Sixers' reach for the current post-Process playoff era.

A guard. Who can dribble. And pass. And shoot. It seems more than reasonable to ask basketball players to do that, but it's proved so hard for the Sixers to nail that down over the last half-dozen years. Impossible even. Ben Simmons would never be that shot-creator here. Perhaps he wouldn't have to be if the Markelle Fultz acquisition in 2017 hadn't blown up in such spectacular and unprecedented fashion. The Sixers were going to have a homegrown star who could score at all three levels to complement a big man who had the goods to become one of the all-time greats.

This isn't to disparage Fultz as a person, who clearly dealt with something unknown to outside parties during his two years in Philly, going from a perfect guard prospect to a guy who, let's just be frank, forgot how to shoot a basketball. It's a simple hoops matter. Fultz was the missing piece, a guy who would echo Iverson's heroics and provide that star center-star guard combo that had proven to be a championship-winning formula for decades.

That went away. Jimmy Butler was brought into be that guy. Personalities clashed between Butler, Simmons and former head coach Brett Brown. He lasted fewer than 12 months in Philly. James Harden was brought in with fanfare, a former MVP who was one of the craftiest scorers to ever pick up a basketball. Harden's playmaking and artistry as a passer may be better than ever, but, in his short time with the Sixers, it looks he's no longer that elite bucket-getter.

Maxey is the anti-Simmons, a guy who was under-drafted and underutilized to start his career before improving in every facet of his game until he became one of the league's premier shooters. Maxey should win the NBA's Most Improved Player award this year (though he was not named a finalist). Name a Least Improved Player award after Simmons and this one after Maxey at this point.

In an abbreviated college career, Maxey shot 29.2 percent on 3.6 threes per game in 31 games for Kentucky in 2020. As a rookie in 2021, Maxey shot 30.1 percent from deep on 1.7 attempts per game. 2022? A whopping 42.7 percent on 4.1 attempts per game, a rate that was the third-highest in the league this year. This doesn't feel like luck that will eventually regress either. Maxey is not some guy standing in the corner waiting for kick-out assists. The dude is pulling up off the dribble at the top of the key (or even far beyond it) and sink shots with uber confidence.

The dread that every Sixers shot is going to be a miss has changed when Maxey is launching threes. The expectation is that he's going to hit them with ease now.

This is how I envisioned Fultz playing a couple of years in his career. This is how Simmons is playing for the Sixers on some alternate earth in the multiverse of madness.

Even playing alongside Embiid and Harden, Maxey has been the Sixers' best player two games into the team's playoffs series against Toronto. He's averaging 30.5/6.5/5 while shooting 68.8 percent from the floor and 57.1 percent on threes. Those rates will inevitably fall, of course, but armed with what's now one of the best long-range shots in the league and a floater in the paint that he shoots approximately 110 percent on, the dude isn't going to let up any time soon. Judging by how much he's improved from Year 1 to Year 2, it could get even better for Maxey, the Sixers and their rabid fans.

Playoff basketball is different than regular season basketball. I don't care if you're a stat nerd or an old curmudgeon who values the eye test above all. It's essentially a different sport. Play design goes out the window. It boils down to one guy being able to create his own shot anywhere on the court. Maxey is that dude. He's doing it right now! For a team that's been bereft of a closer since Iverson was captivating South Philly crowds, Maxey's it, baby.

Maxey has 61 points in the Sixers' first two Sixers games. The other players to do that in a Sixers uniform? You know them without even saying their full names. Allen. Charles. Wilt. Moses. Julius  (per Stathead). Tyrese joins them in all that red, white and blue glory.

He's on the same team as Embiid and Harden and fans are chanting his name when he's on the court! Every three is sending the Wells Fargo Center into a frenzy! The dude swished a three from the hot dog logo for crying out loud the same way a player would hit a midrange jumper in pregame warmups.

I don't know how Maxey's career unfolds. I don't know if he's the next Iverson or Steve Francis or Tony Parker. I do know, however, that 20 teams were wrong for passing on him.