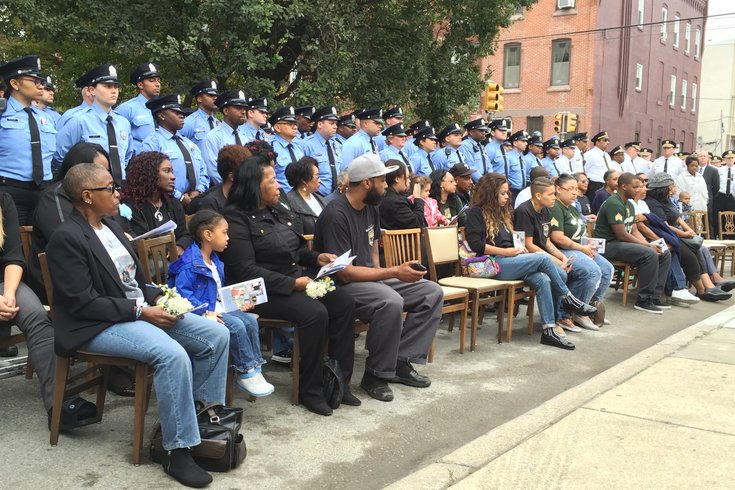 About a half an hour before the ceremony honoring fallen Philadelphia police Sgt. Robert F. Wilson III was scheduled to start, the sounds of bagpipes echoed the length of a block Wednesday on North 17th Street.

Outside the 22nd Police District – a building that features a “To Serve and Protect” mural of an officer bending down to console a young man in a yellow hooded sweatshirt – officers arrived in cars and on foot or, in three cases, horseback.

Along with officers from that district, elected officials and employees of the Game Stop location where Wilson was slain during a March 5 armed robbery, they came to support the fallen officer’s family and remember a man who died while serving and protecting citizens.

Among those who spoke during the 20-minute ceremony, culminating with the unveiling of a memorial plaque that joined two others on the sidewalk near 17th and Montgomery streets, was Philadelphia Police Commissioner Charles Ramsey.

He echoed sentiments that the department will forever be there to support Wilson’s family.

“His was one of the most heroics acts I’ve seen in 47 years of policing. He redefined, in my mind, what heroism is all about,” Ramsey said, alluding to a surveillance video that captured images of Wilson sacrificing his life to protect customers in the store. This is a very, very special tribute to a very, very special man.”

A teary-eyed Officer Mike Rivera, who was in the city's police academy with Wilson, then offered an emotional tribute to “the legend of the man he was, and is.”

“We got each other through the hardest times. He carried me when I couldn’t carry myself. I hope I gave that in return,” Rivera said before more than 200 attendees. “My voice cracks now, but the strength I bring, I know Robbie – "Mr. Hugs" – gave that to me. I love him and I love this family. [He] was a legend. I’ll make sure no one forgets his name.

As Rivera ended his speech Wilson's sister, Shakira Wilson-Burroughs, approached and gave him a big hug. They embraced just feet from a sidewalk memorial plaque still hidden under a city flag and several roses.

She thanked those in attendance for keeping her brother's "name, memory and service" alive. Of the posthumous honors and recognition, she noted that "the part that gets us is that he's not here" to accept them personally.

"Although it hurts that he was the one [at Game Stop] at that moment, he was built for it," she said. "It hurts a lot, but I'm beyond proud of him and will always be proud of him. My brother is amazing. Please keep his memory and his name alive. The silent moments are what hurt the most. When the cameras are off, when the lights stop flashing, that's when support is needed, not just at times like this."

Wilson, a 30-year-old father of two, was killed while responding to a robbery at a GameStop in North Philadelphia.

The eight-year veteran stopped at the store at 22nd Street and Lehigh Avenue to buy his 9-year-old son a present.

When Ramone Wilson and Carlton Hipps allegedly showed up with semi-automatic guns to rob the store, Wilson defended customers inside to the point of firing back even after being shot nine times, according to police.

Wilson is survived by his grandmother, Constance Wilson, and sons Quagmire and Robert F. Wilson IV.

The plaque honoring Wilson was the 116th dedicated all-time through the Hero Plaque program.