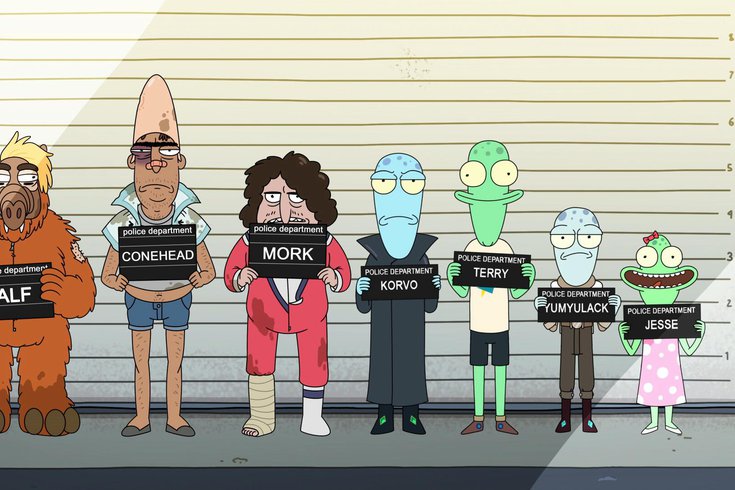 Solar Opposites is back for a second season. Does it build on a promising Season 1 or stagnate in year two?

Two seasons into its run on Hulu, what Solar Opposites seems to relish most is the process of holding serious, show-altering consequences over its audience, only to use one of the many sci-fi devices on hand to write their way out of it. The titular group of characters, who now routinely refer to themselves as the Solar Opposites in Season 2, are maimed and murdered and psychologically destroyed only to pick up the pieces and try again next episode.

The weight of producing a serialized show vs. an episodic one is a battle this creative team has agonized over before while helming Rick and Morty. Season 4's "Never Ricking Morty" served as an elaborate inside look at the pains a writer's room goes through to maintain a cohesive narrative thread. Solar Opposites is an attempt to have their cake and eat it too, an adventure-of-the-week show about alien immigrants with a dark side plot that lurks in the background and evolves over time.

Does it work? Yes and no. There are moments that don't make sense when considered with the history of last week's (or last season's) episode, but Solar Opposites, which returns for its second season on Hulu this Friday, has achieved the difficult task of creating two well-realized worlds in one show, somehow finding room for both along the way.

Solar Opposites is still a show about aliens experiencing human problems and solving them with, to use their own words, "sci-fi shit." Each passing episode seems to bring a more ridiculous device to the forefront than the last — a messaging device based on the 2006 romantic drama The Lake House, a blaster that can birth a city in the middle of nowhere, even the means to artificially manufacture big dick energy.

One of Solar Opposites' best traits is its ability to parody our home planet ever so slightly, elevating the absurd humor by making it feel just enough like home. The aliens snack on, as one example, olive-flavored M&M's, a concept that seems insane until you remember the "Zombie" Skittles released in real life drew comparisons to a combination of garlic and vomit. They hit the mall as a family to get the new Apple Pencil Pro, falling victim to basic corporate marketing nonsense and marveling at Apple allowing them to write in cursive.

Reference-driven humor can grow stale quickly, but co-creators Justin Roiland and Mike McMahan avoid that trap by zipping between callbacks and allusions at a frenetic pace, weaving Revenge of the Nerds into Eyes Wide Shut into an exhaustive (but hilarious) bit of mansplaining regarding the finer details of the Alien vs. Predator extended universe. The inner workings of "The Wall" hinge on, hilariously, one man's experience working on Fox's procedural crime drama Bones.

Yes, the wall subplot returns, and it is home to the majority of the show's continuity and consequences. The miniature citizens are secure in their day-to-day lives, no longer threatened by Season 1's big bad, but from the start it becomes clear things are not as copacetic as appearances suggest. Citizens live with PTSD from wars gone by, death comes in the form of toothpicks and ice cream toppings, and the peace they've achieved rests on a foundation that is shakier than most of the inhabitants realize. 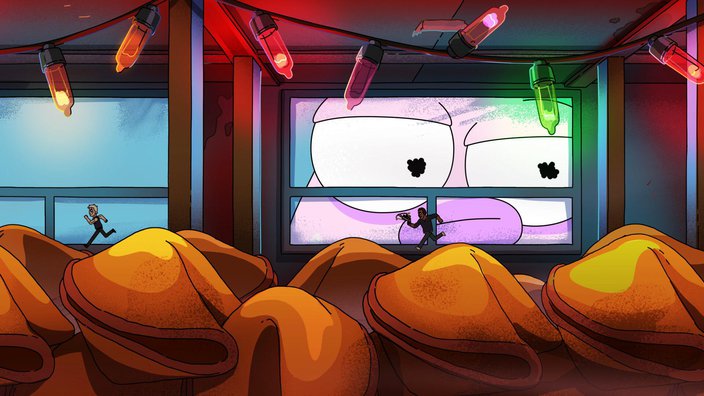 Roiland and McMahan deserve real credit for making it work as well as it does. This is not a throwaway side plot they stumbled into by accident, but an integral piece of the show's existence. It's also emblematic of the show's best qualities, detailed and imaginative while remaining at least somewhat anchored in reality.

It's that success that drives disappointment in the "main" arc of the show. The Solar Opposites crew is likable enough, particularly Terry, whose collection of t-shirts I'd like to get my hands on one day (specifically his Flavor Town University gear). Their adventures are fun and screwed up in a charming way. But it feels like meat is left on the bone with the episodic focus the creators have chosen.

In the premiere, Korvo and the Shlorpians are hit with a big reveal about the nature of their (since demolished) homeworld, revealing a class of citizens they never knew existed and a hard-to-swallow truth about the death of their planet. While the other aliens (particularly Terry) have embraced all Earth has to offer — GOOP subscriptions, Shonda Rhimes, and Ninja Turtle ice cream bars with gumball eyes — this seems like it would have a profound impact on Korvo, who continues to open each episode with a unique rant on why he hates Earth.

In the very next episode, we learn Korvo is in possession of a device that would give him the means to prevent, or at least mitigate the damage of the greatest disaster in the recorded history of his people. It's the sort of thing that could carry his arc for a full season. It just doesn't seem to dawn on Korvo, who evidently forgets his long-held goals and values in service of a hare-brained scheme to correct Terry's personality quirks.

This temporary abandonment of a defining Korvo personality trait is one example of how the show is undercut by telling (mostly) self-contained stories. There are too many episodes where the Solar Opposites crew seems to be learning a variation of the exact same lesson they learned an episode or two prior, recognizing they are more complete when they're all together.

Finding different ways to dress up age-old lessons is the trick of any TV show, and Solar Opposites is certainly creative in the path it takes each time out. Rick and Morty prepared this team to pull a near-limitless number of sci-fi devices out of thin air to build a story around. But this show seems to spend too much time dwelling on whether the plant-based aliens at the center of the show are meant to coexist together, only to come to the same firm "yes" each time.

If Solar Opposites is going to have staying power — and a tease at the end of Season 2 suggests that's the case — it is in need of more individual character arcs, episodes that hinge on adventures that don't eventually bring Korvo or Jessie or Terry or Yumyulack back to their quartet.

Is there room for more than that? The creative team does seem to have some things they'd like to say, even though Season 2's scripts were largely written before the last year's worth of current events. In the finale, Yumyulack turns a device that teaches people to read on a police officer, who ponders the impact it could have on his life path: "What if I gain empathy? What if I learn things that force me to reevaluate my hardline conservative opinions?" Korvo's opening tirade this episode, mind you, centers around the lack of a universal basic income for all of Earth's citizens, a measure he feels should be in place if they're insistent on building robots to take their jobs.

Those are fleeting moments, but it does get at part of what separates Solar Opposites from Rick and Morty. It isn't about humans navigating the far reaches of space, but a quirky family dealing with ordinary problems, like being invited to dinner parties and staying sane at home when school lets out for summer. If they chose to do so, there is room for Solar Opposites to take on more serious matters (and propose ridiculous solutions) from the perspective of socially awkward aliens.

If they don't, there is still a good show and a good time here, flaws and all. Without a clearer direction, though, it may struggle to separate from the pack in a crowded streaming environment.