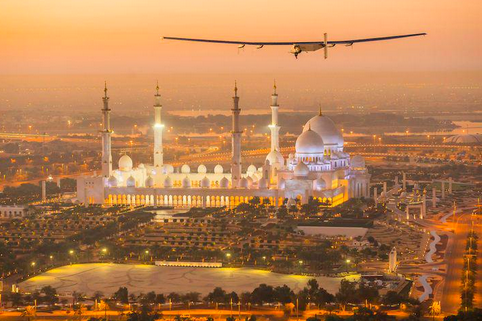 The Solar Impulse 2 was designed to demonstrate sustainable possibilities for future aviation.

Relative to its industrial scale, air travel is often cited as a heavy contributor to climate change, but innovators in aviation have been busy developing future alternatives that can cut down on the CO2 emissions of flying.
A fully solar-powered plane, named Solar Impulse 2, officially took off Sunday night on a tour around the world, LiveScience reports.
The fuel-free aircraft, led in tandem by Swiss pilots André Borschberg and Bertrand Piccard, took flight from Abu Dhabi late Sunday night as part of a journey that will continue into late July or early August.
Powered by 17,000 solar panels and onboard batteries, the lightweight plane weighs just 5,070 pounds with a wingspan of 236 feet.
Co-founders Borschberg and Piccard will alternate piloting duties as Solar Impulse 2 touches down in India, Myanmar and China before crossing the Pacific Ocean. The plane will then cross the continental United States and continue across the Atlantic to southern Europe or North Africa before returning to the United Arab Emirates.
The trip will mark the first time a solar-powered plane has circumnavigated the globe. A previous version of Solar Impulse completed a two-month coast-to-coast demo across the United States in 2013.
Each leg of the trip will available to stream from the Solar Impulse 2 website.
Read the full LiveScience story here.