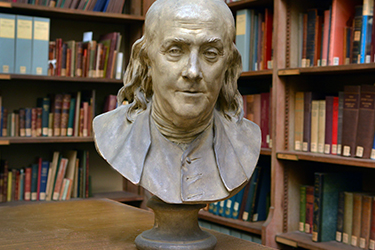 A bust of Benjamin Franklin.

In Philadelphia, American founding father Benjamin Franklin is regarded as arguably our most siginificant champion of democracy and innovation.

Head up to New Haven, Connecticut, however, and some students at Yale University are unhappy with their school's decision to name a new residential college after Franklin.

As universities across the country grapple with protests against racial injustice and its historical links to prominent figures and benefactors honored on campus, Yale announced in April that it would maintain the name of Calhoun College despite the American statesman's ties to slavery. University president Peter Solovey explained the decision as a matter of encouraging the campus community to confront the history of slavery instead of erasing its vestiges.

In response to campus protests, the Yale adminstration created a Committee to Establish Principles on Renaming, which released a report this week detailing an official process to pursue the renaming of buildings. One of the report's distinctions is whether the "principal legacy" and "major contributions" of such figures outweigh their affiliation with troubling historical policies.

Several students interviewed by the Yale Daily News expressed skepticism about whether the report actually opens the door to a name change for Calhoun College or if it's merely a "PR move" on the part of the university.

In addition to Franklin, Yale chose to name another residency in honor of alumna Pauli Murray, a civil rights pioneer and major influencer on matters of law and religion.

At the time of the April announcement, students told the Yale Daily News that the choice of Franklin for one of the colleges was "perplexing" and "lazy" at best and suspicious at worst.

“Out of all the people you could’ve chosen, not only did you pick a former slaveholder, but someone whose legacy is already honored on our currency,” said junior Nat Aramayo.

Tatiana Nguyen, a sophomore, agreed the decision was motivated by financial opportunity.

“Yale’s priorities are money and alumni, who provide the money, so I guess it’s just money,” Titania Nguyen ’18 said. “But Ben Franklin? It’s like [Yale] asked ‘How do we make all the money?’ and decided to name it after a mutual investment firm.”

Franklin received an honorary degree from Yale in 1753 partly because of alumnus Charles Johnson, whose $250 million donation for the construction of the new residential colleges stands as the largest gift ever made to the university. Johnson, Salovey said, views Franklin as a "personal role model."

Johnson is hardly alone in this opinion, even though many Franklin admirers readily acknowledge there are unsavory aspects of his past.

“Franklin’s brilliance as a scientist, statesman, philosopher, and writer shaped our nation," Solovey said. "Pauli Murray College and Benjamin Franklin College, which will open Yale’s doors to thousands of additional future students, would not have been possible without his philanthropic vision.”

Those criticized Yale said they hope the report on renaming signals a move to prioritize the voices and will of the student body when it comes to future decision-making.