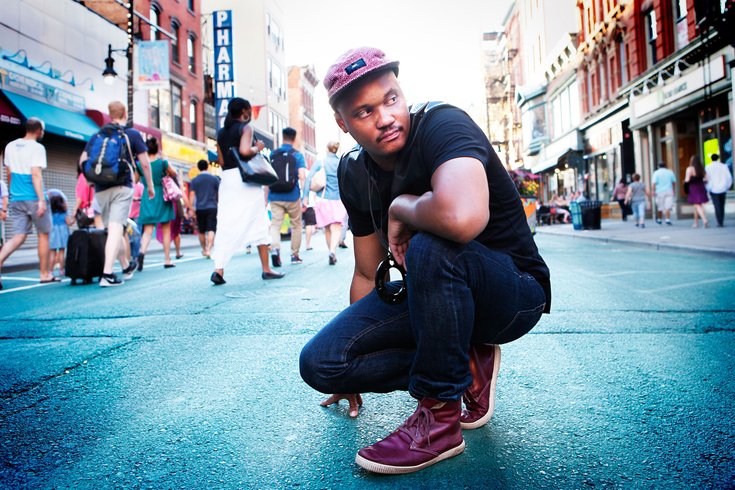 During sound check a few hours before his show in Austin, Texas, last Friday night, Son Little answered my phone call. For the first few minutes, a grungy, distorted guitar blared the bluesy riff that builds to the core of his 2015 song “Carbon.” He kept retreating farther and farther away from the stage to find a quiet place to talk.

Son Little is the stage name that Aaron Livingston adopted in 2014 after writing for, and collaborating with, Philly mainstays The Roots, Hezekiah and producer RJD2, with whom he also worked as a duo called “Icebird.”

That was also the year Livingston – who moved to the city in the early 2000s – released his first solo material, an EP titled “Things I Forgot.” Last fall, he followed up with a self-titled debut on the eclectic record label ANTI-. In between those projects, he produced a four-song EP for the legendary gospel singer Mavis Staples, writing two of the songs and playing most of the instruments.

“I felt like her record was more important than mine,” Livingston admitted with a laugh, noting that he set his own album aside to seize the moment.

That was a good move: Staples won a Grammy for Best American Roots Performance for one of the songs Livingston didn’t write, but his fingerprints are still there.

You can also hear them all over his own record, where he takes the same fascination with traditional blues and soul into more daringly experimental territory. After years of writing lyrics and punching vocals for other artists, the Staples EP, and his own debut, gave Livingston the chance to finally produce himself.

“As a solo artist, I guess it was kind of daunting [to be] in the producer’s seat,” he said. “I had gotten kind of used to someone else controlling that part of it. All I had to do was write lyrics and sing. It was cool. … I really treated it like, ‘Mavis is a voice, just like I’m a voice.’ I just tried to shape the sound around that voice.”

Like many of his peers, Livingston is pigeonholed by the “retro-soul” label that chases him around.

His voice — a slightly raspy but delicate tenor — fits the bill, but he twists and distorts it to various effect on “Son Little.”

In “I’m Gone” – the album’s opening track – Livingston’s voice is drenched in a slight electronic filter and layered back on itself several times over. The creeping, song-driving synth sounds almost like water dropping into a sink. There’s a sparseness that achieves an expansive sense of space.

While some tracks stick to more traditional territories, Son Little frequently deploys weird and unique electronic sounds into places where they fit unexpectedly. “Go Blue Blood Red” is the most stunning effect of this tinkering.

The lead synth pings like an electric harpsichord and the drums are hip-hop driven. While there’s an unsettling effect to Livingston’s wailing verses, it’s also entirely soulful.

“My misfit tribe, my fiery bride, these crooked Spanish steps,” he sings, showing off a flair for the poetic.

“I hear a lot of things across genres that appeal to me,” Livingston explained. “I figure every sound that humans make probably relates to something we’ve always encountered in the world, maybe it’s animals or water rushing.

“Sometimes I might hear something in an old folk or gospel tune that sounds a lot like a synthesizer or guitar that was played through a broken amp; it sounds a lot like some of the distorted sounds that we manufacture on purpose now. I think it’s just kind of mixing all that stuff into a gumbo.”

Livingston credited RJD2 with enticing his fascination with new sounds and musical equipment.

“He’s really skilled at manipulated analog synths and even modular synths,” Livingston said. “I learned a lot about those things just watching what he was doing and just being able to kind of dial in the tones you want.

“I had messed around some but really watching him do that helped, he’s literally a wizard with that kind of stuff. … Over time and through conversations with [RJD2] and other music-makers and producers, I sort of caught the bug and have become a late-blooming gearhead.”

“I think solitude helps a lot in terms of writing. I can have ideas, but it’s a little easier to flesh your ideas out and try different things when you have time alone."--Son Little

While he said he’s never felt constricted by the collaborations, it’s impressive to watch Livingston carve out a solo identity so quickly.

“I think solitude helps a lot in terms of writing,” he said. “I can have ideas, but it’s a little easier to flesh your ideas out and try different things when you have time alone. If you have some weird idea and it’s kind of ambiguous, or still developing, you can just try it out without having to run it by anyone. It’s kind of scary sometimes I think but it’s also really exciting and I think it’s worked relatively well.”

Fresh off a tour alongside Leon Bridges, Livingston said he’s already working on new songs. While his first album was “somewhat influenced by this on-again, off-again sort of road schedule,” he admitted this latest surge has stifled new material.

”Actually, it’s ironic. You play every day, but you don’t get to play music as much as you used to,” he said. “It’s interesting. It presents a challenge. How do you continue to write and be creative? You have a lot less time and you’re not in your own environment.

“I got some sort of collaborative things in the works. I did a song with another label-mate, Doe Paoro. We’re going to be on the road a little bit together. Some little things like that. I’m finding ways to carry out my sonic experiments on the road, the mobile version. I’m constantly generating ideas and putting things together. I guess I’ll be moving towards another collection of songs, whether it’s an EP or an LP, at some point soon.”

Listen to Son Little’s debut album via this stream.