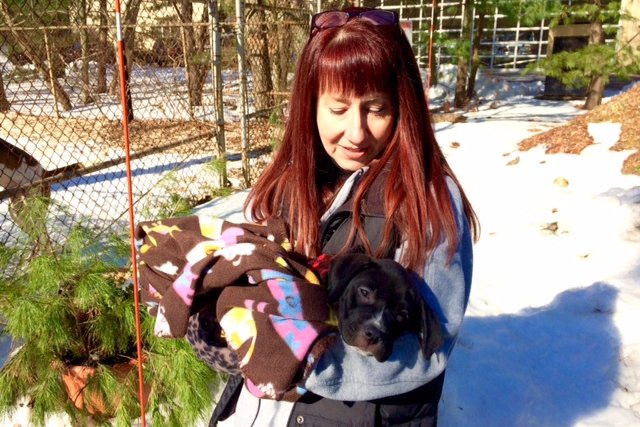 Jennifer Bailey, a board member of the Voorhees Animal Orphanage, a no-kill shelter for dogs and cats in Camden County which also partners with other nearby shelters, holds a seven-week old pup that is a mix of Labrador and pitbull. The VAO rescued this dog and littermate from a crowded kill-shelter in northern New Jersey. The VAO is planning to refurbish and expand its facility.

The no-kill Voorhees Animal Orphanage is a bit ramshackle, cobbled together bit-by-bit since it began in 1988.

After all, it was really meant to be a temporary building, but the need to care for animals kept trumping plans for an expanded permanent shelter.

But Dave Semless, the VAO’s president, announced Thursday the time has finally come to make changes, refurbishing and expanding the shelter which serves 15 Camden County municipalities and partners with other shelters throughout New Jersey and Pennsylvania.

Semless made the announcement flanked by Camden County Freeholder Jeffrey Nash and his rescue dog, Norman; Voorhees Mayor Michael Mignona; and VAO board secretary Jennifer Bailey, who was cradling a pup recently taken from a crowded kill-shelter in northern New Jersey. The freeholder board and Voorhees pledged support of the effort.

Semless’ message about the VAO is simple: The shelter does great work, finding homes for 20,000 dogs and cats since its founding. And it needs a bit of help to keep doing great work.

Operations at VAO, by a mix of paid staff and volunteers, cost about $450,000 annually, he explained.

About a third of that comes from the partner municipalities and the rest comes from donations and fund-raising.

Meanwhile, adoptions last were up by 25 percent. About 75 percent of the county’s households have a pet, Semless added.

The capital fundraising goal is $1.6 million. About a third of that is already in hand.

The announcement Thursday was meant to push the remaining fund-raising into high gear through a wider public appeal.

Semless said the plan is to break ground within the year, with a planned completion by 2018 – the 30th anniversary for the facility.

Expansion will begin adjacent to the current facility, allowing the shelter to keep providing service while prepping for the future, Semless added.

To donate or read about the shelter, click here.