Food, drink, music and retail crafts and art the focus 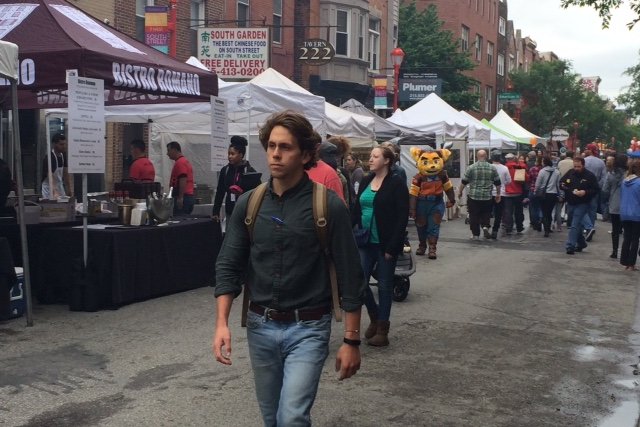 The South Street Spring Festival, spread over 12 blocks, including Headhouse, continues until 8 p.m. Saturday, with food, drink, music and retail crafts and art the focus.

Stephanie Anne, 28, was in from Hoboken, New Jersey, with her friend, Luis Cruz of Prospect Park, New Jersey, when they lucked into the festival.

Anne, who visits a friend in the area often, heard about the festival from the hotel where she stayed.

With a cheese-covered brisket sandwich and a platter of truffled fries, she was happy for the timing.

Cruz, while he comes to Philly on cheesesteak tasting trips -- Friday it was Tony Luke's and Saturday he planned on his first bite of Jim's, a South Street institution.

He said he was startled by the street fair, but liked it and hoped to come back for more.

Some food vendors reported a slow start because the Philadelphia Health Department was slow in making the rounds for approvals of some temporary food set ups.

Terry Ryan was on his second beer stein refill at the Brauhaus Schmitz will host annual Maifest -- and planning more.

The Haddonfield resident said he loves the food nearly as much as the beer.

"People come out and sit at the communal tables. You always meet someone," said Ryan.