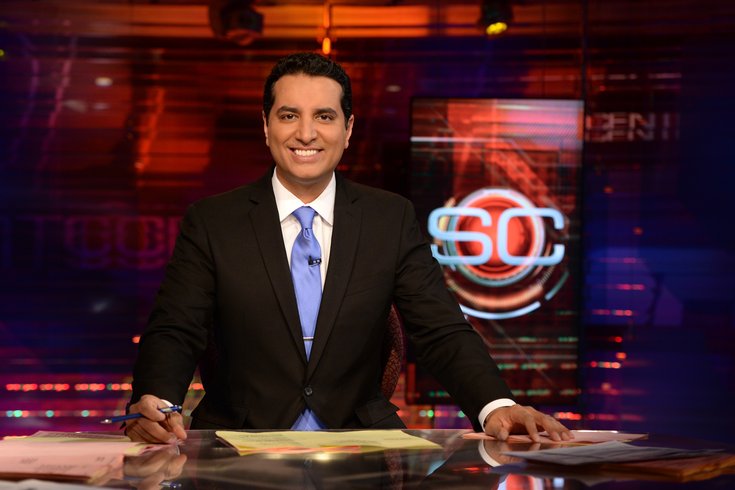 Kevin Negandhi, sportscaster for ESPN's "SportsCenter," will deliver the commencement speech at Temple University's graduation ceremony on Friday, May 8.

Kevin Negandhi feels lucky to be a part of ESPN — why wouldn't he? The Worldwide Leader in Sports? An anchor on "SportsCenter?" Reporting on the front lines of the most tectonic stories impacting the landscape of the NBA, the NFL and beyond?

All of that's great, of course, but for the Phoenixville native and host of this year's Special Olympics USA Games, the pride and joy of ESPN is participating in an event that illustrates just how life-affirming sports can be.

"There's no other company that would do something like this," Negandhi told PhillyVoice during a call from Husky Stadium in Seattle, where he's preparing to host Sunday's opening ceremony for the Special Olympics.

ESPN and parent company ABC will broadcast a week's worth of ceremonies and competitions featuring the unsung American athletes, many of whom were told they could never thrive in the arena of sports.

The best of the best, 4,000 athletes and coaches, proved their doubters wrong as they qualified in their respective sports, rising up from local and state competitions for a chance to contend on a world stage.

Negandhi, a graduate of Temple University, overcame heavy odds himself when he became the first person of Indian-American descent to work on a national sports network. His involvement with the Special Olympics began in 2014 in Los Angeles, followed by World Game coverage for summer and winter competitions.

"The one thing I always walk away from here [with] is the power of sport and how it allows you to get involved regardless of your background or what you're experiencing," Negandhi said. "You're allowed to take part. This is inclusion at its best."

The stakes are high for these athletes, many of whom represent their local communities and train year-round for the chance to compete in one of the event's 14 sports.

These are opportunities given to athletes who deserve it. Many of these athletes talk about how getting involved and being part of a team, they have a different identity. You see the adversity, but then you see how sport has changed their life." - Kevin Negandhi

Founded in in 1968, the Special Olympics has grown to encompass more than 5.7 million athletes in 172 countries, creating teams out of a partnership with Unified Sports.

Negandhi, who has been putting together profiles on some of the American athletes, said he's met some incredibly inspiring inspiring individuals.

"We have one bocce player who's blind and very good at what he does," Negandhi said. "These are opportunities given to athletes who deserve it. Many of these athletes talk about how getting involved and being part of a team, they have a different identity. You see the adversity, but then you see how sport has changed their life."

"It's emotional," Negandhi said. "You feel a variety of differnet feelings. You feel sadness, but at the same time you feel inspired and you want to celebrate. The first thing I want to do is call my family, hug my kids and just be grateful for the things we have that we take for granted."

More than anything, Negandhi sees the event as an important way to tear down the barriers created by a culture of bullying, name-calling and labels. To see these athletes enjoy the roar of a crowd and feel equal in society is a mark of real progress.

"When we can do something like this, we're not just impacting one night or one audience," Negandhi said. "We're changing a perception. When these athletes go home, they see that they're representing their town. They're proud and hold their heads high. Their communities are embracing them, not bullying them. It recalibrates how we think. It's inspiring and rejuvenating."

The 2018 Special Olympics USA Games debut Sunday on ABC with an opening ceremony at 3 p.m. EST. Nightly shows will run Monday through Friday on ESPN2 at 6 p.m. EST, with a closing ceremony returning to ABC on July 8.