Sports Illustrated had plenty of love for Philly's sports teams, and with good reason 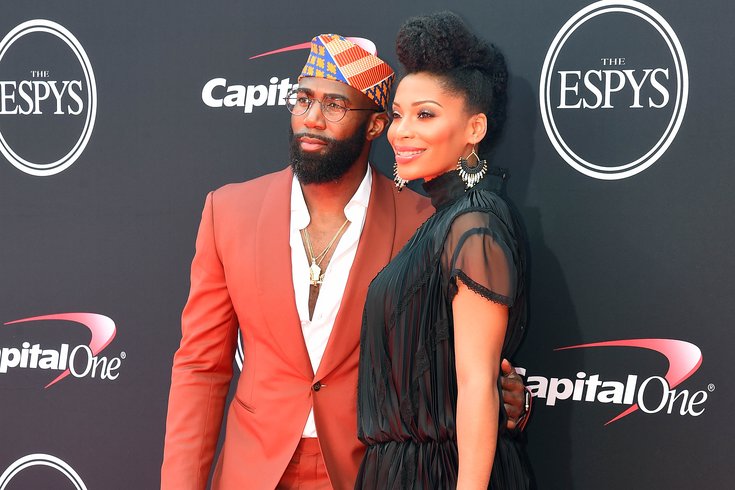 Philadephia Eagles safety Malcolm Jenkins and wife Morissa arrive at the 2017 ESPYS. Jenkins was named one of Sports Illustrated's 50 most fashionable athletes in the world, along with the Sixers' Ben Simmons and the Phillies' Bryce Harper.

Philadelphia sports teams have had a pretty solid past few years, from the Eagles' Super Bowl victory to the Sixers' transformation into a perennial title contender.

You may have noticed the teams' stars have also looked pretty good, on red carpets and around town.

At the very least, Sports Illustrated clearly noticed, because three of Philly's best and most popular athletes were named to the magazine's list of the 50 most fashionable athletes in the world.

The Phillies' Bryce Harper, the Sixers' Ben Simmons, and the Eagles' Malcolm Jenkins all received nods from SI, a pretty sizable chunk of the list to come from one city that isn't New York or Los Angeles.

Let's see what Sports Illustrated had to say about those guys.

Harper appeared under the list's "Trendsetters" section, with this comment:

"Phillies right fielder Bryce Harper might be most recognizable by his perfectly coiffed hair and manicured beard, but his style game is strong, too. The 26-year-old has an effortless look that mixes casual street wear and suits with a touch of pizazz."

That seems about right: Harper's shown plenty of fashion pizzazz in his short time with the Phillies so far.

Simmons appeared under the list's "Street Style Stars" section, with this comment:

"76ers point guard Ben Simmons is only 22 years old, but he’s quickly cemented his own brand of personal style in the NBA: creative, au courant and always consistent."

Simmons has donned his fair share of big-name fashion brands, the kinds of clothing that most people have never heard of, so this is a fair assessment.

Last but not least, Jenkins appeared under the "Classics" section, with this comment:

"Eagles safety Malcolm Jenkins believes personal style is just an outward expression of one’s personality, so it’s no wonder that the 31-year-old has mastered the art of being outspoken and bold with classically tailored suiting. And he carries that mindset over to Damari Savile, his custom-suit store based in Philadelphia."

Jenkins has been a fashion tycoon for years, especially with those signature bowties, so getting a nod in the Classics section is good stuff from Sports Illustrated.