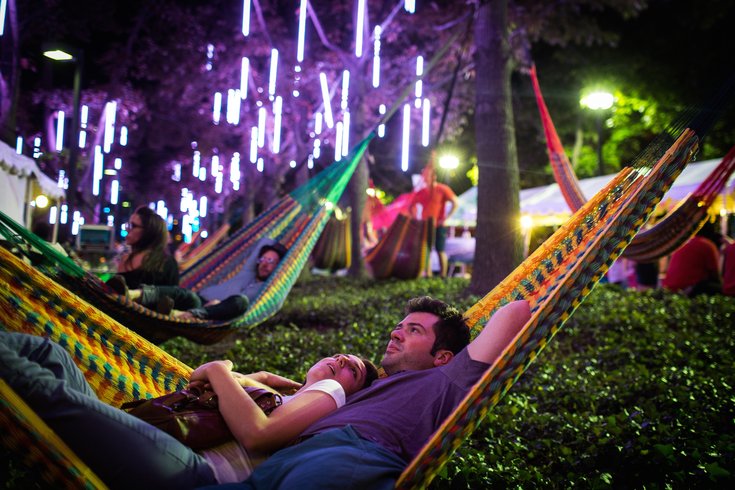 You've heard the hype and you've seen the Instagrams. Philadelphia is unabashedly in love with Spruce Street Harbor Park.

What was meant to be another fun addition to the waterfront has become the city's most anticipated summer attraction. Not only was it mentioned in The New York Times' blurb on why everyone should visit Philly and named to The Huffington Post's Best Urban Beaches in the World after a few short months, but it activated a space largely ignored by Philadelphia for years.

SSHP may have seemed like an overnight success, but it took months of planning and collaboration to create. The Delaware River Waterfront Corp. began gathering resources over a year before the park opened to the public.

It all started with an ArtPlace America grant awarded to the DRWC in 2013 for the creation of a public place that includes art and utilizes unused space. Though their initial proposal revolved around a floating barge in the marina, the idea slowly morphed into a more permanent waterside hangout space for all walks of life.

"Our mission is to provide free and accessible programming for Philadelphia, so it has to be something that is entertaining for all of those people – for friends, families, singles, couples – and it has to be accessible to everyone at every income bracket," DRWC Communications Manager Emma Fried-Cassorla said of the park.

Thus, SSHP is open from 11 a.m.-11 p.m. every day and is free to enter; guests can bring their own food if they want, and many of the site's attractions are free, too. By making space for so many demographics and hosting a varied events calendar, SSHP is always buzzing from open to close.

Of course, as part of their master plan for the central Delaware River, which includes projects like RiverRink and the Race Street Pier, the DRWC also wanted to continue getting Philly in touch with the water. 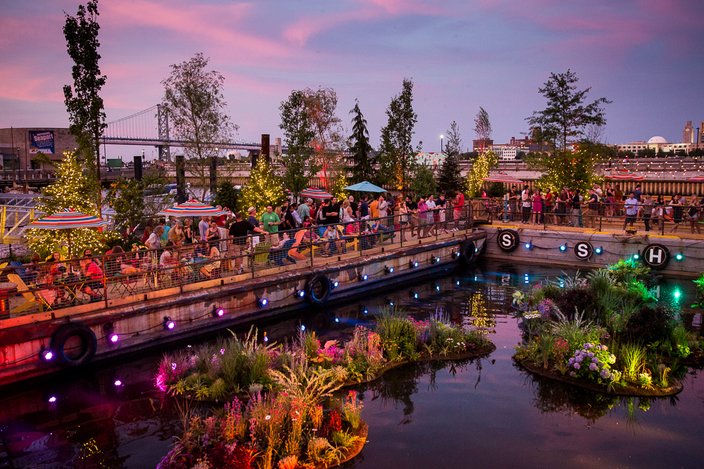 "These spaces that we’ve built out all connect to that [plan] by showing people that they can reconnect to the waterfront, showing developers that if you build it, they will come," Fried-Cassorla said.

With the main ingredients of waterside recreation and accessibility in place, the DRWC got Groundswell Design Group on board to bring the idea to life. The two worked together to honor the area's industrial history by using floating barges, shipping containers and raw metals as the anchoring visual language of the site.

For Groundswell, the next step to beautifying the site was using the natural resources to embellish the space, rather than starting from scratch. That meant complementing the plentiful tree cover and the park's beautiful vistas with reconfigurable green spaces and floating gardens.

"We don’t like to throw anything out," Groundswell Principal David Fierabend said. "We like to reuse it, make it safe and put it back in the environment. So we try to stay away from anything that comes in and takes away the integrity of the space."

And that was just the (bar-raising, record-breaking) first year. Now, Spruce Street Harbor Park returns better than ever. As it opens Friday, May 22, the park will look much the same, but with some important improvements. 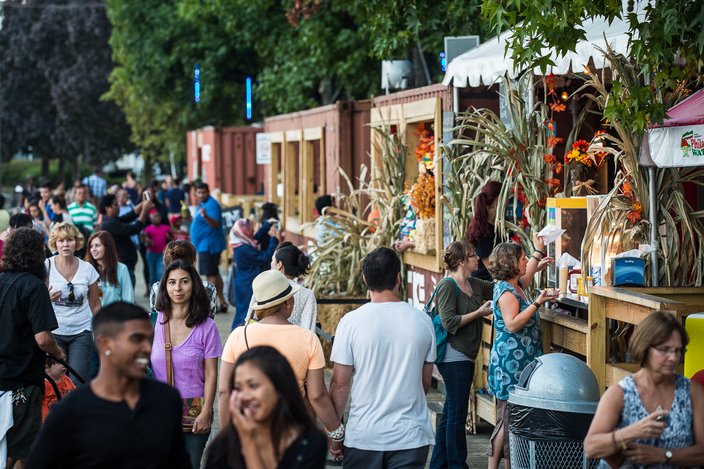 Though the park's expansion and return was quickly decided upon, SSHP was not exactly designed to last this long. For instance, those signature floating barges were rented and thus had to be purchased by the DRWC. In another turn of events, about 75 percent of the water gardens' plants came back and are flourishing, according to Fierabend, with a little animal habitat sprouting up around it. A short-term feature has made itself long term.

After the park exceeded even the DRWC's expectations, they looked to their guests for feedback. The responses they received ranged from commendations on their security staffing to requests for more hammocks. To their credit, the DRWC listened.

Guests also requested much more food. Ask and you shall receive, Philadelphians: This year's offerings include not one but two restaurants, three bars with a signature Yards brew, an ice cream shop, concessions and a weekend food truck. 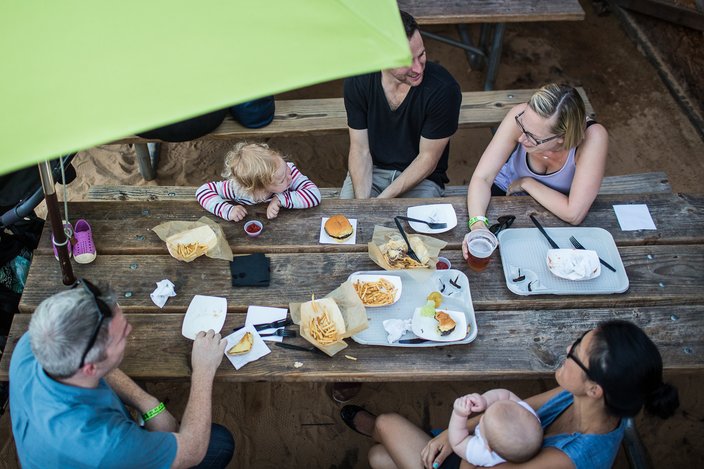 Collaborating with some of Philly's favorite food brands is just a smart move. But when asked why they'd join up with the DRWC for what's sure to be a crazy summer (besides the requisite profit), each brand had the same answer: a love of the waterfront.

"I think we’ve all seen the waterfront as kind of this lost place that has so much potential, so the idea of being part of that revitalization is really exciting for us," Sarah Eberle said of Franklin Fountain's involvement. (Sister brand Shane Confectionery will have an outpost at RiverRink Summerfest, too.)

"Everybody loves having great food and to eat outside doing the summer... Just to make this open to the public, what they did with the park was really intriguing," said Aaron Kleinle, Garces Group vice president of operations, events & catering.

Federal Donuts partner and general manager Tom Henneman said, "Something as simple as a food truck and a hammock and some lights and we’re like losing our minds like we’ve never seen the water before. I think that just goes to show how much potential there is yet on our waterfront and that’s something I personally and professionally would love to see."

Yes, extra hammocks will be in place, the pretty lights will return, and the park is now slightly bigger. But details like a new planted meadow reusing flowers from a temporary Philadelphia Museum of Art installation exemplify what the DRWC, and the city, really want to do with the waterfront: Take something good and make it amazing.

As Fierabend notes, "Development is great, but you don’t have to get rid of everything in order to make it better."