Maria Vaccarella, of Howell, was fined and told she could face six months in prison for taking in baby squirrels 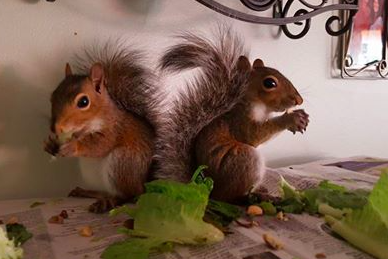 George and Lola were adopted by Maria Vaccarella after their injured mother gave birth and returned to the wild.

A New Jersey woman who welcomed a family of squirrels into her home in Howell says "it doesn't make sense" that she should be charged and fined for rescuing the animals from their probable death in the wild.

Back in July, Maria Vaccarella found an injured squirrel that had fallen from a tree in her neighborhood, according to the United Press International. She decided to place the squirrel in an outdoor cage and care for it until it became healthy enough to be let loose.

Vaccarella went to check on the animal one day and discovered that it had escaped, leaving two baby squirrels behind in the cage. After leaving the baby squirrels in the elements for 24 hours, Vaccarella reasoned that the mother was not going to return and the babies stood no chance of surviving. She contacted registered wildlife rehabilitators for help, but was told that the baby squirrels could not be taken in for care.

That's when Vaccarella decided to affectionately name them George and Lola and adopt them.

"I brought them in, kept them warm, bottle fed them," she told WABC-TV.

The squirrels remained in Vaccarella's home for four months, drawing adoration on Facebook in a series of proud posts by their loving foster mom.

On Halloween, however, the New Jersey Division of Fish and Wildlife showed up at Vaccarella's home to question her about George and Lola, whom they had seen online. She cooperated fully and felt that she had done the right thing. She didn't have any idea that protecting the squirrels was illegal.

Three days after handing over the squirrels in their cage, Vaccarella received a ticket to appear in court. She was told she would be fined between $500-$1,000 and might face up to six months in prison for the criminal offense of taking care of two unfortunately abandoned squirrels.

Vaccarella pleaded not guilty, arguing it's a waste of taxpayer money to drag her into court over an act of natural kindness.

"I think it's absurd, it's ridiculous," she told News 12 New Jersey. "I wasn't hurting anybody. I didn't abuse an animal. I was helping them."

Vaccarella, who told friends on Facebook that it breaks her heart not knowing George and Lola's fate, will appear again in court on January 27.