Starbucks apologized to a Philadelphia police officer after his rant about the coffee chain's Center City location went viral.

Philadelphia officer Joe Leigthardt posted the complaint from another officer, who is not named, on Friday.

The post recounts the anonymous officer's trip to the Starbucks located at 13th and Chestnut streets. The officer alleges he tried to use the bathroom but was refused because he did not purchase something.

In the post, the officer accuses the woman of trying to embarrass him because he is a cop, calls her a "young blonde liberal" and says it was now "hip" to "berate" officers.

The entire rant, which was posted to Starbucks' Facebook page, can be read below: 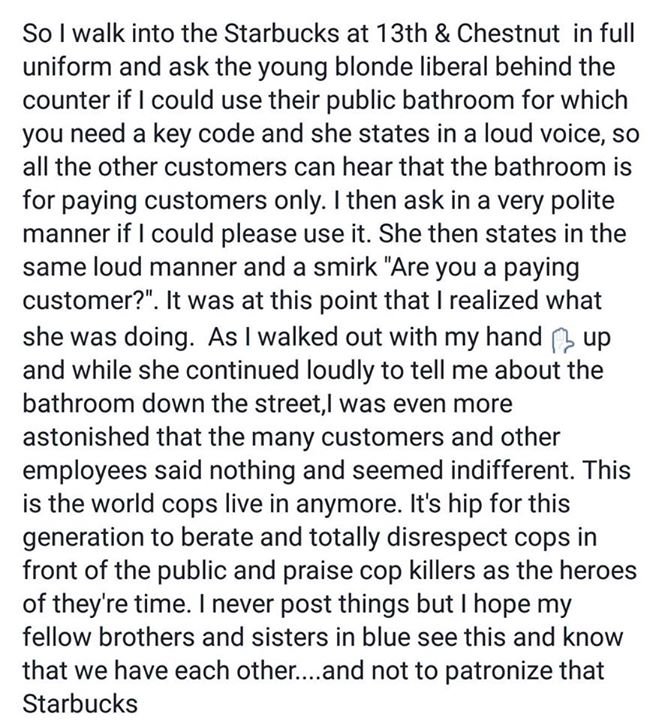 The post has more than 15,000 shares and more than 4,000 likes, and many commented voicing their support of the anonymous officer.

Starbucks posted a comment on the photo of the complaint, saying it wasn't in line with their customer service policy and that they were aware of the situation.

When asked about the incident, Starbucks issued the following statement to PhillyVoice, saying they apologized to the officer:

We want everyone who visits our stores to enjoy their visit. This customer’s experience was not consistent with the welcoming and friendly environment we strive to create for everyone. We have personally apologized to the customer and look forward to welcoming him back to our store.

When asked whether Starbucks bathrooms are only for paying customers, the spokesperson said they were open to the public.

In the comment section of the original post, Leigthardt clarified that he didn't believe officers should receive special treatment but said they oftentimes don't have many options when they want to use the restroom:

No one is asking for special treatment, but when your "office" is a police car and you're running from job to job in Philadelphia, I'd he supposed to hold in? Pee on the sidewalk? I'll bet your job has a bathroom within 100 yards. Cops don't. And this particular Starbucks calls the police several times a week for things as simple as someone sitting on the bench outside their property.

The post also claims that the particular Starbucks location will frequently call police for minor requests.