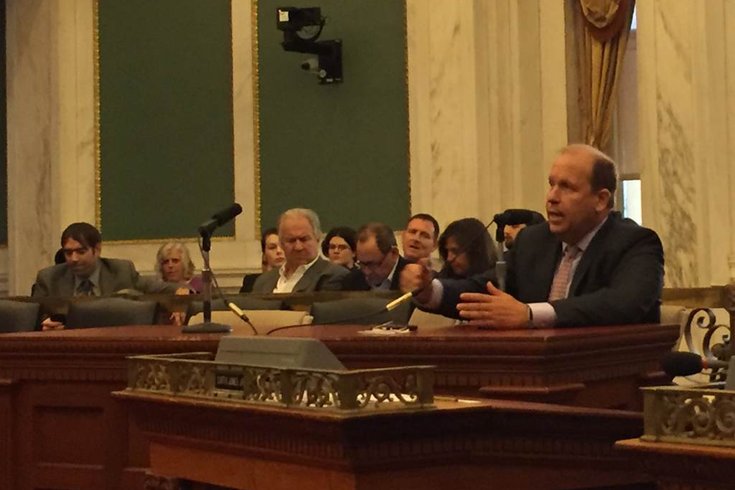 State Sen. Daylin Leach, a prime-sponsor of the state's medical marijuana law, testifies at a hearing before Philadelphia City Council on Friday, September 9, 2016.

Pennsylvania can expect to see a decrease in opioid abuse with the legalization of medical marijuana, a prime sponsor of the legislation told Philadelphia City Council on Friday morning.

Asked about the safety of the drug, Leach said that in the 1930s, marijuana was the second most-prescribed drug in the United States.

"Until millions of dollars were spent to demonize it," he noted. "This is helping sick people feel better."

Leach, who co-wrote the legislation signed into law by Gov. Tom Wolf earlier this year, said Pennsylvania's medical marijuana bill is one of the best of its kind "in the country."

"I believe this is the most important social legislation we've had in decades," he said.

Leach spoke about the new law at a hearing of City Council's Public Health and Human Services Committee to discuss medical marijuana law and its impact on Philadelphia. Marijuana activists and national experts attended as well.

Full implementation of the law will take about 18 months. In the meantime, councilmembers sought specifics on how to deal with the growers and dispensaries that will likely begin to appear in Philadelphia.

Leach said he believes medical marijuana will bring a wealth of economic benefits to the state.

"As an ancillary effect, this is going to have a huge benefit for the state of Pennsylvania," said Leach.

To that end, he said he supports requiring that licenses for dispensaries and grow operations go to businesses that can exhibit 51 percent ownership by Pennsylvania residents.

In researching the legislation, he said he's visited grow houses and dispensaries across the country.

"They employ a lot of people," he noted.

Pennsylvania's medical marijuana law is the only one nationally with provisions to allow research on the effects of the drug. Such research has been a long time coming in America, Leach said.

"We are going to be the leader in the nation because of these provisions," he said.

The state legislator also touted a five-percent excise tax on growers's sales of medical marijuana to dispensaries. Asked by council members if that tax would provide any real financial benefit to the state, Leach said revenues "would be substantial." He said he based his opinion on preliminary research, but didn't offer any projections on that income.

Some people testifying on Friday said they had concerns about the medical marijuana law.

Thomas Farley, the health commissioner of Philadelphia, said that he had concerns that cannabis users could be at risk of becoming addicted to the drug.

It was a point that Leach immediately disputed.

"We do not believe that marijuana is addictive," Leach argued.

Leach noted that the physical effects of withdrawal from alcohol – including tremors and even possible death – are not evident with marijuana, no matter how much one smokes regularly.

"None of these are present for people using marijuana," said the state senator.

Instead, Leach compared marijuana "addiction" to something akin to sex addiction: if you don't have it, you might really want it. But wanting it isn't going to kill you.

"You're not going to have tremors if you don't have sex," he said. "Believe me, I've been there."

Farley noted his concern over the drug being available in an edible form in Philadelphia, and looking like candy. As an example, Farley told council members that he has seen marijuana-laced fruit gum candy.

But Leach replied that the sale of edibles are not permitted through this law.

Paula Brumbelow Burns, a member of the city's planning commission, said zoning regulations might need to be be updated to account for grow houses or dispensaries. While such regulations are still under discussion, she said city planners think grow houses and dispensaries could be designated as "regulated use" structures — like adult novelty shops, gun stores, pool halls and correctional facilities.

These structures have certain regulations — they must be located 1,000 feet from other regulated use structures and 500 feet from a variety of protected uses, like residential, hotels, convention centers, schools, playgrounds and the like. Such guidelines, however, would curtail the city's ability to host dispensaries and grow houses, she said.

In order to provide more locations for such operations, Burns said the commission could remove distance requirements from residential areas and convention and civic centers, and consider dispensaries as commercial uses.

Marijuana activist Chris Goldstein said the state may not actually get the economic benefit from medical marijuana that some hope to see.

"This is a state-authorized cartel," he told council members.

Currently, Goldstein said, any publicly-traded company can apply for a grower or dispensary license, whether it is based in Pennsylvania or not. And while Leach supports provisions to require some local ownership, Goldstein argued that large pharmaceutical companies would likely fight any provision impacting their ability to generate profits.