How Philly became home to the world's finest gelato artisan 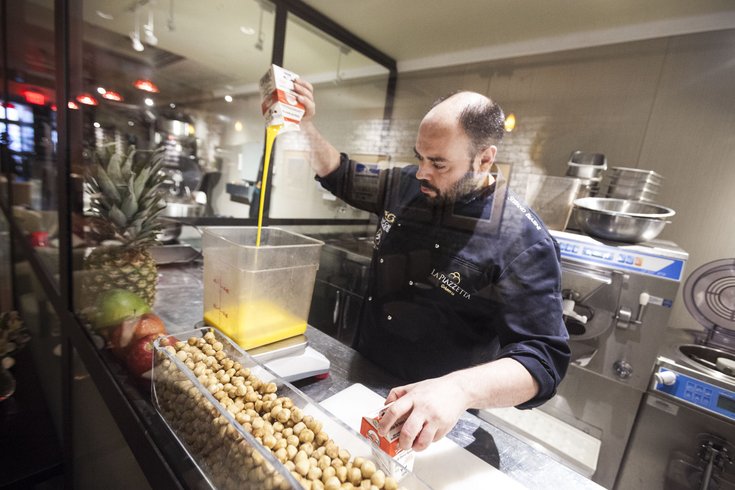 Stefano Biasini, who won the 2014 World Cup of Gelato, mixes together ingredients to make gelato. He co-owns Gran Caffe L'Aquila at 1716 Chestnut St.

Imagine a less wild-haired Italian Einstein with a knack for gelato-making, and you've got a solid impression of Stefano Biasini.

The 2014 winner of what's oft-cited as the "World Cup of Gelato," Biasini crafts gelato -- "cooks" doesn't do him justice -- in an upstairs, glass-enclosed kitchen at Center City's Gran Caffe L'Aquila. He works with the intense focus of a chemist experimenting with liquids and beakers, creating nearly 100 kilos per day of 18 flavors (out of 100 in total), all perfected right down to the gram of sugar.

Curiously, this gelato connoisseur's presence in Philadelphia has gone largely unnoticed since the cafe opened in December. So, it bears repeating: Philadelphia is home to the world champion of gelato-making. And that's kind of a big deal.

Biasini first surfaced as one to watch when he beat out 20 challengers in a national competition in Italy in 2013. He edged out his primary competitor, a Sicilian who was the favorite to win, in a nail-biter of a six-round, "Iron Chef"-like contest. He then went on to compete as captain of the Italian team in a worldwide competition that hosted competitors from Japan to Germany, where he earned his world champ title.

"It was a good sensation [to win]," Biasini told PhillyVoice through his Italian accent. (Part of this interview was conducted through a translator.) "And what was really important is that it was the door for this project: Gran Caffe L'Aquila."

Upon winning, the United States granted him an O-1 Visa, reserved for people with "extraordinary talent or achievement." It allowed Biasini to move to Philadelphia -- and start his business without going through an immigration process that would have taken years for the native of L'Aquila, in Italy's Abruzzo region.

Longo: What separates [Stefano] is the mathematical basis to everything he does. Usually he can make a new gelato in one try and it's perfect. It shocks me."

Biasini chose Philadelphia for his project after meeting city native Ricardo Longo. Longo, who owns Toscana 52 in Bucks County and frequently tours Italy, was blown away by Biasini's talents when he first stumbled upon him. He persuaded Biasini to bring his talent stateside.

"What separates [Stefano] is the mathematical basis to everything he does," Longo told PhillyVoice. "Usually he can make a new gelato in one try and it's perfect. It shocks me."

"He literally tastes the gelato first in his mind."

Originally an engineering student in the southern Italian city of L'Aquila, Biasini opened a location of Gran Caffe in L'Aquila with coffee roaster Michelle Morelli in 2003, as a more coffee-oriented project. (They both now own the Philadelphia location.)

It wasn't until he started making gelato at a temporary Gran Caffe location in the periphery of L'Aquila, following a 2009 earthquake that devastated the city and the original cafe, that he started to receive high compliments from patrons who were amazed by unusual flavors like Saffron. Still, he took the praise with a grain of salt because, since it came from people he'd known his entire life.

The "Desire," a berry gelato that's the most popular flavor on the menu. (Thom Carroll / PhillyVoice)

But when Biasini started taking his gelato to demonstrations across the country -- Milan, Emilia and elsewhere -- the reaction to his out-of-the-box flavors was overwhelmingly positive. From there, he knew he was onto something: He ditched engineering and started to study under a previous gelato world champion, all the while continuing to experiment with and sell flavors he created with Italy's most premium ingredients in mind: hazelnuts from the Piedmont region and amaretto cherries from Rome, to name two.

Eventually, he settled his focus on what he's now trying to popularize in Philadelphia and elsewhere: gastronomic gelato.

What that means, in a nutshell, is he's creating savory gelatos to be paired with appetizers and entrees. In the 2014 international gelato competition, for example, he won over the judges with a jalapeno pepper gelato. At Gran Caffe L'Aquila, said Longo, the restaurant's two most popular dishes are entrees paired with gelato: carbonara with pancetta (ahem, bacon) gelato, and Piedmont-style ravioli with white truffle gelato.

The appeal of the pairing is "about the sensation of hot and cold," explained Longo.

When the gelato melts, he added, it serves as a sort of cream or additional sauce. It's a sort of culinary balancing act.

Biasini added that gastronomic gelato has, internationally, long been the least popular of gelato types, but that he thinks more restaurants will hop on board with the concept as patrons -- like his own -- experience the concept for themselves.

In that sense, he sees his experiment in Philadelphia as just the beginning of a much grander endeavor. 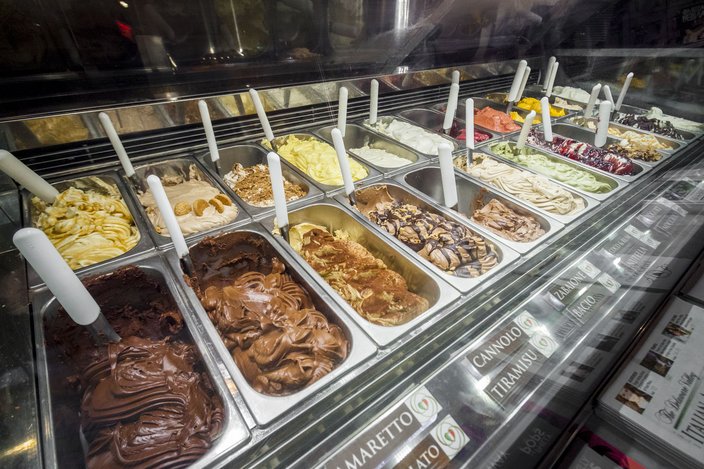 The lineup of 18 gelatos and six sorbets, all of which are turned over three times per day. Biasini makes all of the cafe's gelato. (Thom Carroll / PhillyVoice)

"In 10 years, when chefs all over Philly and New York are adding gelato to their dishes, I want to be remembered as the guy that started this," Biasini said through a translator.

He also wants his gelato to eventually reach a wider audience. He's already in the starting process of making that happen.

"What I'm working on right now is systems that will ensure high quality at a higher production level," Biasini said. "Before any increase in production goes on, it’s essential that whether I make 100 kilos of gelato a day or a million kilos a day, that it's all the same quality."

In the meantime, he's happy spending literally every day in his kitchen and laboratory, crafting gelato and dreaming up new flavors to be introduced based on ingredients sourced both locally and from Italy.

To boot, he's been pleasantly surprised to have stumbled upon an enormous Philadelphia population of Americans from Abruzzo, reinforcing his belief that his journey to Philadelphia was the right one to make. It feels like a homecoming.

"This," he said, overlooking his kitchen, "is a project of destiny."