Sticking To It: A poet-turned-street artist finds her voice 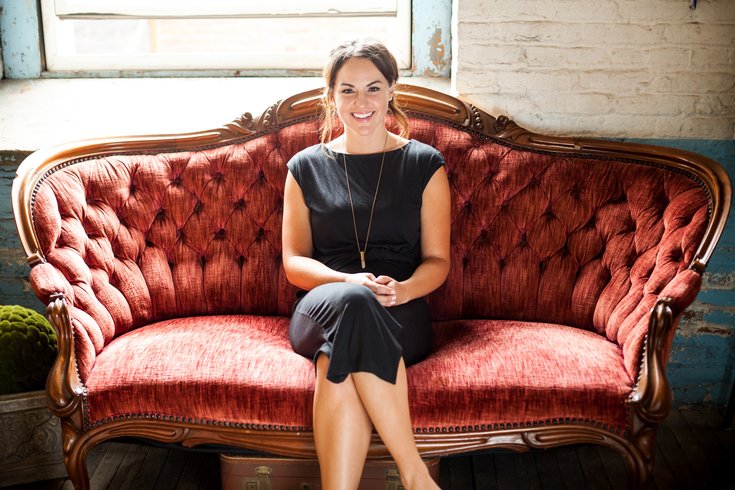 Writer and street artist Chelsea Fleming poses for a photo on a favorite vintage couch in her Kensington writers studio.

You may have seen some of Chelsea Fleming’s handiwork around town.

Since March, the 27-year-old poet-turned-street artist has been slapping her postcard-style stickers on walls, newspaper boxes and old phone booths.

One says, “Tripping over your ghost, caught kicking shadows.”

Another, “I tried to hold you together with words but it wasn’t enough.”

Sad, romantic and borrowing a style belonging to some of Fleming’s favorite authors (think: Plath, Nin and Dickinson), the cards are visually understated, but their deeper messages tend to sneak up on urban wanderers who happen to look up from their phones at just the right moment. I spotted my first piece by Bursera_Grave — that’s her Instagram account, written in small print at the bottom of each sticker — a few months ago near Third and Race streets during a coffee run, and they’ve been popping up ever since.

Once you start noticing these postcards, it becomes a bit like a treasure hunt. You start noticing them everywhere — Old City, Northern Liberties, Fishtown, Kensington, Port Richmond — and you want to piece together a sonnet or message from the other side. They read like secrets. What will this mysterious poet whisper to me next?

The woman behind the stickers

For a street poet, it turns out Fleming is actually a pretty practical person. A lot of the stickers have been appearing in Old City, mostly because she is in a writers group there. Others turn up where she lives (Kensington), where she used to live (Northern Liberties) and other places she’s been around town.

Until she began her sticker campaign in the first week of March, Fleming (raised in Brigantine, New Jersey) had been looking for a way to share her verse.

“It was pretty rough. As a writer, you go through these phases of self-doubt. For me, the rejection letters were confirming a lot of insecurities I had within myself, both as a person and a writer: ‘You’re not good enough, your voice isn’t unique, you suck.’ You know: all the fears creators carry around everyday.”

“The typewriter ribbon ran out of ink, so I wrote them out by hand. I just kept going.” — Chelsea Fleming

One day, after an especially bad rejection, Fleming decided she would try a new approach. She destroyed most of her poetry and pulled out her grandmother’s Underwood typewriter and just started typing. And typing.

“I ran out of paper, so I started using notecards,” she said. “The typewriter ribbon ran out of ink, so I wrote them out by hand. I just kept going.”

Then she began tearing up her new poems, too. Soon she was sitting in a big pile of scrap paper.

Then came the a-ha moment, the realization that the individual pieces were better than the whole. It was the day her street art was born.

“I had to share them,” she said. “Initially, I didn’t want people to know if I was male or female or Asian or a little white girl from New Jersey, so I opted for a pseudonym.”

Bursera_Grave actually derives from the phrase “Bursera graveolens,” the scientific term for palo santo, a wood that’s traditionally burned to repel negative energy, boost creativity and aid spiritual growth. Fleming often burns it in her studio space when she writes. The rituals of burning and writing seem to complement one another, especially considering the project arose out of the proverbial ashes of her more traditional poetry career. 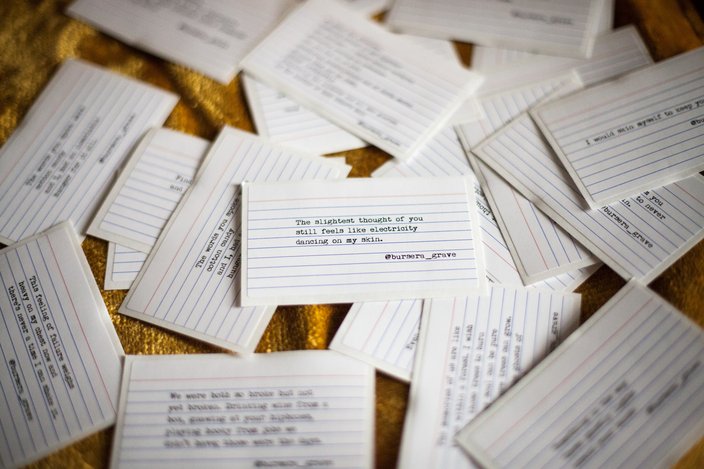 Though there is a digital component to her work — i.e. posting her poems on Instagram — Fleming mostly wants to connect with people offline.

That’s why you’ll often find her work in bars, coffee shops and restaurant restrooms — anywhere people may have private time within the public realm.

“I put them where I think people go to re-group,” she said. “I hide in those places a lot. Most of the posts I get tagged in on Instagram are the notecards people find in bathrooms.”

Fleming’s work isn’t exactly like that of Philly’s other notable street artists, like Omar, Rat Boy and Spain, real-life Spider-Men with spray cans leaving their marks on the sides of buildings and bridges. Her stickers are usually found at eye level, meeting people where they are. They’re also quite small. If you see one, you’ll need to get up close to read it. The experience is more intimate that way.

“I wanted this project to be about connection,” she said. So far, Fleming has posted around 25 stickers, with a new set on the way.

“I put them where I think people go to re-group. I hide in those places a lot." — Chelsea Fleming

Her street poetry isn’t limited to Philly — it can be found in places as far away as Key West, Miami, New York City and Tulum, Mexico, where she posted her first ones while on vacation. She’s also sending some to friends who will post them on the West Coast, Europe and Canada come summer.

Fleming is up against a lot of the same obstacles fellow street artists endure. A scan around the city might even suggest that street art, especially graffiti, is back in a big (and sometimes small) way.

Philly.com reported that just six years ago, the city’s 311 service logged about 1,000 requests for graffiti removal. In 2013, that number jumped to 7,500. It’s hard to say whether that meant more graffiti or less tolerance of it (or the new 311 app just doing its job), but a look at water towers, rooftops and walls suggests a comeback is indeed underway.

There are tags, stickers, stencils and posters going up every day. But it’s not exactly the same as it was in the ’70s and ’80s when big cities like Philly and New York were also dealing with high crime rates and staggeringly bad economies. In fact, the Anti-Graffiti Network of yesteryear morphed into today’s Mural Arts Program, which has helped put Philly on the map in terms of sanctioned public art.

It’s easy to imagine a philosophical kinship, if not an aesthetic similarity, between a millennial street artist like Fleming and an old-school graffiti artist like Darryl “Cornbread” McCray.

For McCray, considered the first graffiti artist in Philly, the art helped channel frustrations of growing up in a tough neighborhood. His colorful, ubiquitous tags brought him notoriety and fame in the ’60s and ’70s.

For Fleming, street art has also created an outlet and a way of dealing with her own frustrations with the literary world. Even if the modern-day graffiti may be a bit more Urban Outfitters than Style Wars, it draws from that same well.

And it still breaks the same rules, which is why most artists don’t want to go public for fear of getting caught.

“I try to put [my stickers] up in respectful places,” said Fleming. “Sometimes when a passerby catches me slapping a sticker and shoots me a stink eye, I have to remember that my intention is connecting people through poetry. I feel like if you stay true to your intention as an artist, there’s an element of fear, but it’s always worth it.”

Fleming said she’s been inspired by a generation of street artists from Swoon, Stikman and Eine to Steve Powers, Baron Von Fancy and Escif — some of whom have turned their work into legit businesses. Her closest street art peer in Philly, WRDSMTH, uses a typewriter image to share poetry (there’s currently one posted on the Hale Building).

Fleming is looking into wheatpaste next — and writing a book.

“When I quit my job last April to pursue writing full time,” she said, “I had this idea for a book that I’ve kind of abandoned, but recently I’ve been thinking about returning to that idea.”

It may not be surprising that the 27-year-old also has a background in branding. She worked to help open Atlantic City’s Revel casino. When it closed, she grew weed and managed a dispensary in South Jersey. She’s now finishing up a yoga training program at Amrita Yoga in Fishtown.

When she’s not in either her writing or yoga studio, she spends a lot of time walking around the city with stickers in her pocket. Sometimes she places them intentionally, like where she had a meaningful conversation with someone. Sometimes they get stuck up on the way to happy hour, like this one at Ortleib’s:

come at me with

“Why happy hour?” I asked her.

“Because I love happy hour!” she said. 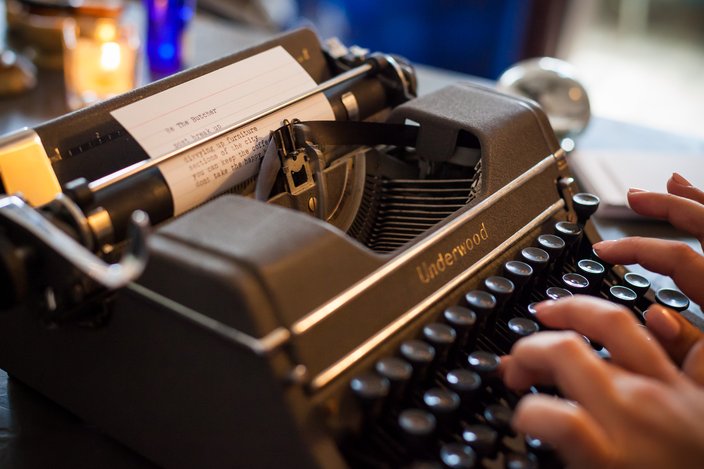 Writer and street artist Chelsea Fleming types a poem on a notecard using a typewriter given to her by her grandmother.