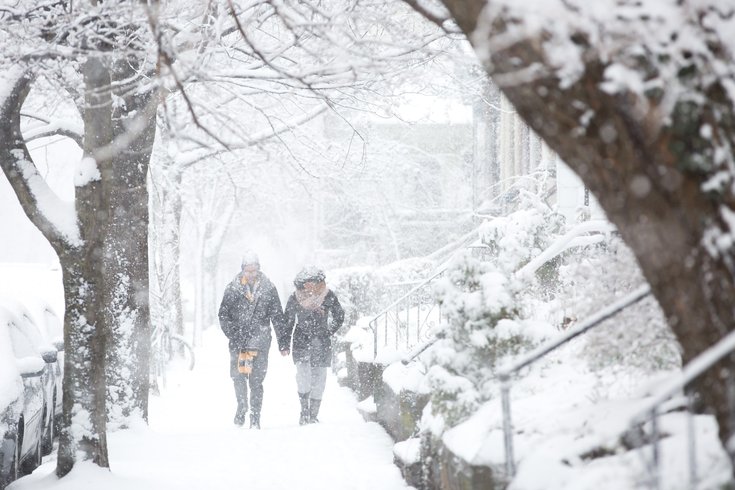 A couple trudges along a sidewalk as snow accumulates along 46th Street in West Philadelphia on Wednesday, March 21, 2018.

A low pressure system that now looks to veer to the south of original tracking projections has forecasters raising snow accumulations for Sunday night and Monday morning.

A winter storm watch has been posted from 1 p.m. Sunday through 7 a.m. Monday for all of southeast Pennsylvania, central and southern New Jersey and northern Delaware, according to the National Weather Service.

The precipitation looks to begin as rain on Sunday afternoon, but as it intensifies amid dropping temperatures, there will be a changeover to snow across much of the Philadelphia region, including south and east of I-95, forecasters said. That said, with temperatures flirting with the freezing mark, precipitation forecasts are somewhat sketchy.

The snow is expected to begin about 7 p.m. Sunday and fall until about 1 a.m. Monday.

In a support briefing on Saturday, the weather service said: "We are increasingly concerned about snow rates." Rapid deterioration of conditions on area roadways is a major concern, it said.

At AccuWeather.com., senior meteorologist Kristina Pydynowski said: "This will be a quick-hitting snowstorm that may only affect communities for 12 hours or less. At the peak of the storm, snow may fall at a rate of 1-2 inches per hour from eastern Pennsylvania and points northeastward." 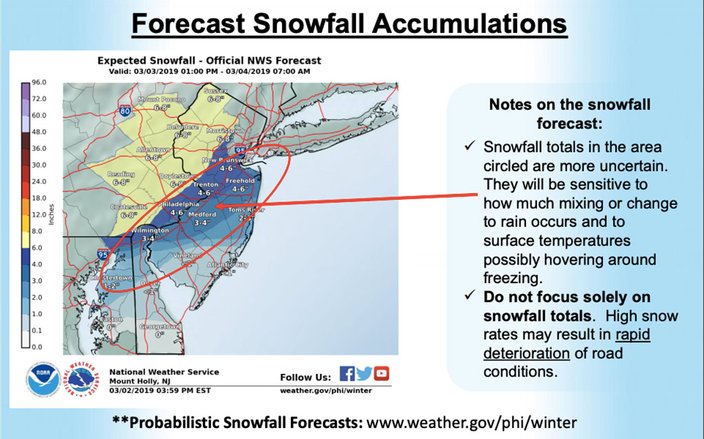 With the path of the low tracking more to the south, the snow will get deeper than initially thought. Forecasters are expecting 4-6 inches in greater Philadelphia (along the I-95 corridor) and 6-8 inches in the northern and western suburbs, weather service forecasters said.

But forecasters said some warm air should wrap around the low pressure system after midnight or so, resulting in less snow and more of a wintry mix for southern New Jersey and the I-95 corridor late Sunday night.

Travel could be very difficult through the period, forecasters said.

Northeast Corridor service between Boston and Washington, D.C. and points south is expected to continue to operate as scheduled.

Here is the 7-day forecast for the Philadelphia region:

Sunday: Rain after 10 a.m., mixing with snow after 4 p.m. High near 42. Northwest wind around 6 mph becoming calm in the morning. Chance of precipitation is 90 percent. New snow accumulation of less than a half inch possible.

Monday: A chance of rain, snow, and sleet before 7 a.m. Cloudy, then gradually becoming mostly sunny, with a high near 38. Northwest wind 10 to 14 mph. Chance of precipitation is 30 percent. New snow and sleet accumulation of less than a half inch possible.

Tuesday night: Partly cloudy, with a low around 15.

Wednesday: Mostly sunny, with a high near 27.

Wednesday night: Mostly clear, with a low around 13.

Thursday: Sunny, with a high near 32.

Thursday night: Partly cloudy, with a low around 18.

Friday: A chance of rain and snow. Mostly cloudy, with a high near 37. Chance of precipitation is 30 percent.

Friday night: A chance of snow showers. Mostly cloudy, with a low around 27. Chance of precipitation is 30 percent.

Saturday: A chance of snow. Mostly cloudy, with a high near 42. Chance of precipitation is 30 percent.