The story behind this summer's 'rabbit explosion' at the Jersey Shore 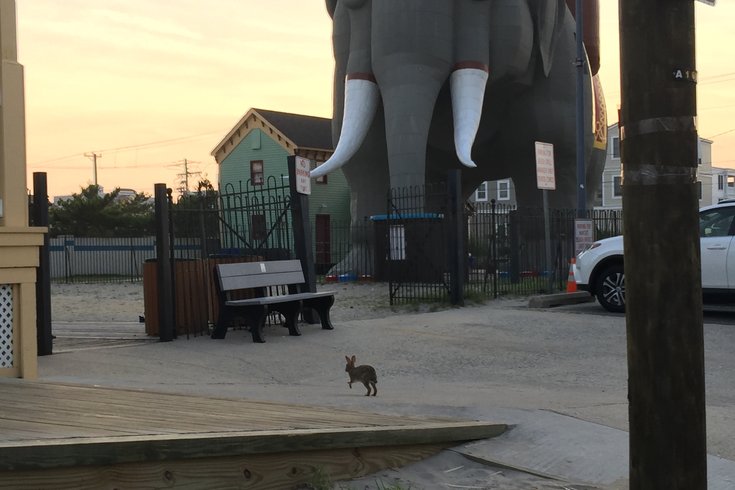 A rabbit hops its way past Lucy the Elephant in Margate, N.J.

Once you notice the first one, they’re everywhere you look.

In what one Jersey Shore wildlife-rescue expert termed “an explosion,” the rabbit and bunny population has grown by leaps and bounds this summer.

Granted, there are no concrete statistics available on their numbers. Their notoriously quick and voluminous breeding patterns make that a virtual impossibility.

Still, animal-control workers, locals, shoobies, rabbit-rescue volunteers, civic officials and the state Division of Fish & Wildlife all agree that hares have seized land from the southern tip of Atlantic County to the northern end of Ocean County, inland and beyond.

That was when the Longport Board of Commissioners approved a six-month contract for an animal-control agency “to round up rabbits which are eating the manicured lawns and lovely flowers planted by residents in this wealthy hamlet by the sea.”

The effort ceased less than a month later when Longport Mayor Nicholas Russo suspended the program because of backlash that prompted this quote: “Even my own daughter said, ‘Dad, there can be too many negative consequences to this bunny relocation.’ How can I ignore my own daughter and all my young constituents?”

“We’re getting calls mostly from Longport, Margate and Ventnor about rabbits,” she said. “We’ve never kept figures on it, but how many people call animal control when they have raccoons, possums and other predators for rabbits just not because they’re sick or injured, but just because they’re in their yard?

“They’ve taken away all the predators in Longport and we’ve had an explosion of small things: chipmunks, moles, skunks. A raccoon in your yard is not the worst thing in the world, but some people call anyway. They would eat the baby rabbits, which is a sad thing to say, but people just don’t want (the predators) in their yards, so they call and have them taken away.”

To be sure, the lack of predators is a common explanation for the “rabbit explosion," cited by everyone from Sam Holland of Animal Control of South Jersey, Lisa Kirk with Stafford Township (Ocean County) Animal Control and Andrew Burnett, wildlife biologist with the N.J. Division of Fish & Wildlife.

It’s more of a curiosity than a menace, though.

At their worst, the rabbits feed off people’s gardens, and set up living quarters in backyards in shore resorts. Those detriments are merely shrugged off by some locals.

“Something’s been eating my flowers, and I guess it’s the rabbits, because I’ve seen them all over the place,” said Joanne McMahan as she walked a pair of pooches down Amherst Avenue in Margate. “It’s exciting, though. My dogs like chasing them.”

Stephen Dash of the Atlantic County Humane Society said it extends beyond the barrier islands.

“We have been seeing an increase in wild rabbits in several cities,” he said. “I live (about 20 miles inland) in Egg Harbor City and there is definitely an increase there.”

She and a team of “rabbit wranglers” recently rescued a rabbit that was getting stalked by neighborhood cats in Mt. Holly, Burlington County. She’s also had recent rescues in Trenton and Parsippany.

“I get calls almost every week about strays, and from people wanting to surrender rabbits because they have nowhere to go,” she said.

Augustynowicz chalks a lot of the population increase over the years to people buying “cute little bunnies around Easter” and soon realizing they’re not up to the task of caring for them.

“What happens is people don’t educate themselves about what it’s like to have rabbits in the house. The scratches. The bites. They turn hormonal. Kids don’t want anything to do with it,” she said. “A lot of shelters won’t take them. They’ll say, 'We’re dog and cat shelters.' Well, that’s not really fair. 'You’re an animal shelter,' I always remind them.

“The moral of the story is educate yourself first. Rabbits are wonderful pets. They’re intelligent. They’re easily litter-box trained. They’re perfect for apartments and smaller areas, but they are a bit of a challenge.” 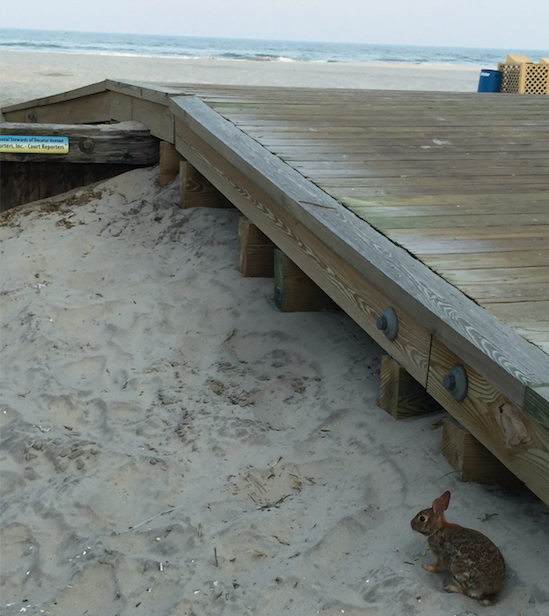 Animal-control officials noted an overabundance of rabbits at the Jersey Shore this summer, but haven't kept track of statistics.

With that, some rabbits are just cut loose into the woods or yards. Considering they’re low on the food chain, they'd normally get eaten by other animals and birds. Without those predators around, that threat has been diminished, particularly at the shore.

Considering that a study found that one female rabbit can start a seven-year breeding tree that results in 184.6 billion – yes, billion – offspring over a seven-year span, well, you’re starting to see how the lack of predators could become an issue.

While Burnett of the DEP doesn’t deal with “Hey, I saw a rabbit” calls, it’s his job to keep an eye on population trends. He said “it was a fairly good breeding season this year.”

Phyllis Sanguigni has seen the evidence of that good breeding season in the Marven Gardens section of Margate, Atlantic County that she calls home. 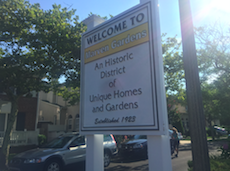 Rabbits, rabbits as far as the eye can see this summer in the Marven Gardens section of Margate, N.J.

On any given day numerous rabbits can be seen on manicured lawns, and in driveways and gardens.

“I’ll see five or six every time I’m walking my dog up this street and two or so more when I come back around the block,” said Sanguigni, a local since 1950. “One time, I was watching from my house and I saw someone walking a dog and it looked like they were going to let it attack the rabbit. I said, ‘Oh no. Oh no. Don’t do that.’”

The rabbits aren’t a nuisance for Sanguigni and her friends.

“When I see them, I think about how precious they are,” she said. “It’s so precious when nature comes into your home environment.”

But there is something about shore nature that’s left Sanguigni perplexed.

“Where’d the ducks go? They used to come up to my door every day, but I haven’t seen any of them here this year,” she concluded. “That should be your next story.”

Well guess what, Phyllis: It will be.