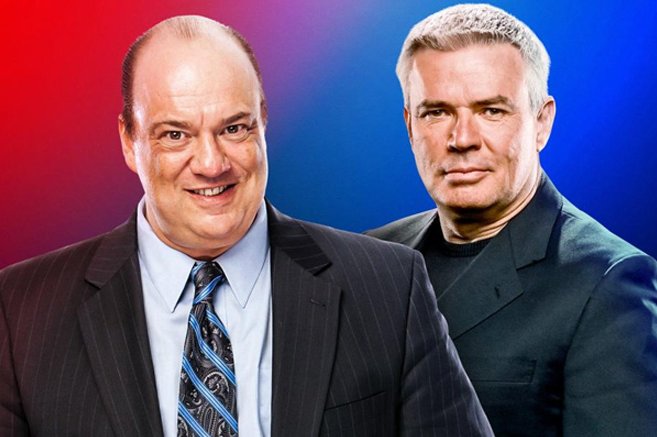 The biggest story of the week took shape on Thursday morning when WWE officially announced they were bringing back Eric Bischoff and Paul Heyman to run their weekly television programming as Executive Directors. Bischoff will take hold of SmackDown as it transitions from the USA Network to FOX later this fall, and Heyman will run Monday Night RAW.

So what exactly will the Executive Directors do? According to the WWE.com article, Bischoff and Heyman "will oversee the creative development of WWE’s flagship programming and ensure integration across all platforms and lines of business. The creation of these roles further establishes WWE’s ability to continuously reinvent its global brand while providing two distinct creative processes for its flagship shows."

Two distinct creative processes... but what will that entail in the long run? Nick and Vaughn discuss the possibilities but also some harsh realities that many might be looking past. After all, they're still answering to Vince McMahon. And where does this leave Triple H?

From there, the guys discuss the beef between WWE Universal Champion Seth Rollins and IWGP Junior Heavyweight Champion, Will Ospreay. Rollins tweeted before the WWE Stomping Grounds pay-per-view that the company he works for has the best wrestling on the planet. Period. Ospreay took exception to Rollins intimating nobody could touch him in the ring. And wrestling fans who wanted a war are now upset.

Ahhhh I’m sorry little guy. We already have a better version of you here and he just won his first US Title tonight (Congrats @KingRicochet). Keep working hard though buddy! https://t.co/JwB36iWaIg

I don’t care about goodwill, Wade. I care about respect. And if some kid who thinks he’s got it all figured out wants to step to me, then he’s gonna get patted on the head and sent on his way. And so will you. https://t.co/93grZHKHDs

WWE also made a move to broadcast the EVOLVE 131 10th anniversary show in Philly on July 13 on the WWE Network. It would probably be looked at as awesome for everyone that works for EVOLVE and WWN since they have begun a relationship with WWE, but not everyone was happy about it, including AEW's Kenny Omega. That's because AEW is running a charity event, Fight for the Fallen, the same night in Jacksonville.

The guys discuss their thoughts on that and if it really affects the charitable aspect of AEW's show.