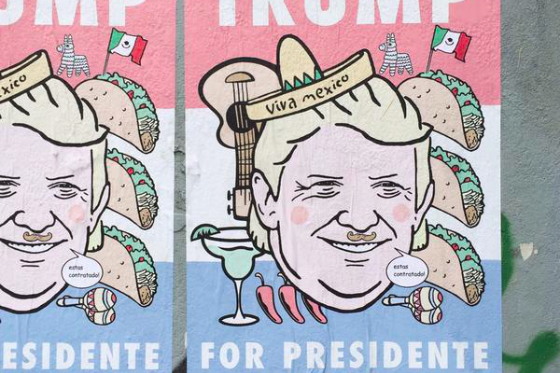 Donald Trump may have grabbed the lead among Republicans in a recent CNN poll, but despite the unseemly surge in momentum, it's safe to say a propaganda poster designed by New York City-based street artist Hanksy isn't really an endorsement of the real estate mogul's presidential aspirations.

A sighting of Hanksy's poster has been reported at Philadelphia's former Triangle Park on 601 Christian Street, according to the Passyunk Post. A tweet from the artist facetiously offers Trump help to deliver on his promise of winning the Latino vote after making deeply disparaging remarks about immigrants, specifically Mexicans, in the United States.

Hey @realDonaldTrump I want to help you get the Latino vote. pic.twitter.com/3n7wSP6NJB

In addition to a margarita, three chili peppers, three tacos, a piñata, a guitarrón and maracas, the Trump of Hanksy's poster gets his own blonde handlebar mustache and a speech bubble declaring, "Estas contratado! (you're fired)."

The posters are the latest in a series of responses to Trump's comments during a speech at the launch of his presidential campaign last month. Whereas most have responded with outrage, Hanksy has taken a satirical approach to trivializing Trump's upswing in early polls. For his detractors, it may take a lot more of this, as Trump today announced that his net worth exceeds $10 billion