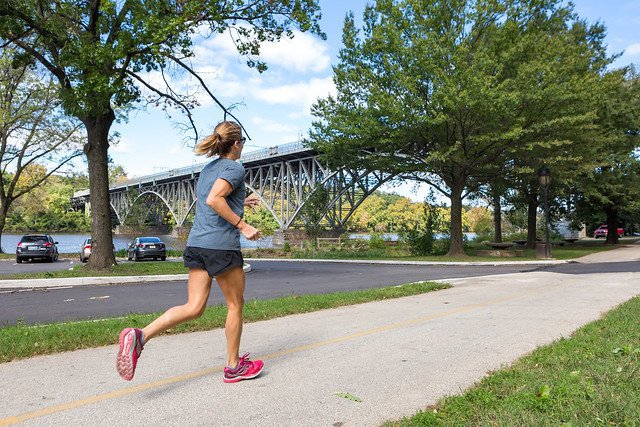 Many female runners push through the pain while training, increasing their risk for a stress fracture, a Thomas Jefferson University study finds.

Female runners are twice as likely as male runners to develop a stress fracture, but the reason for this gender disparity isn't completely understood.

New research from Thomas Jefferson Universe suggests both physiological factors and a lack of education on property training play role a role.

About 20% of all runners have experienced a stress fracture, a small crack in the bone caused by an array of factors, including improper technique and increasing a training regimen too rapidly. They are most common in the shin bone, but also occur in the foot, heel, hip or lower back.

To explore the best ways to prevent stress fractures in female runners, Thomas Jefferson University researchers conducted two studies: one on possible physiological causes, the other on runners' knowledge about proper training routines.

The first study, published in Sports Health, examined physiological factors like muscle mass, hormonal levels and bone structure and density. The second, published in Physical Therapy in Sport, focused on training intensity, nutrition, insufficient strengthening and the tendency to push through pain.

Both studies were based on data from the same 40 female recreational runners, ages 18 to 65. Twenty of the women had a history of running-related stress fractures, the other 20 didn't.

"Most of the literature focuses on elite runners or athletes," said Therese Johnston, a physical therapy professor and the first author of both studies. "It was important for us to capture the regular or average female runner in these studies, and the main goal was to see how we can prevent a first or subsequent fracture."

In the first study, the women underwent a full blood panel that included hormone levels, vitamins and minerals important to bone health, like vitamin D and calcium, and bone markers. They also had their bone mineral density tested with dual energy x-ray absorptiometry.

There was no difference in estradiol hormone levels between the two groups, but women in the stress fracture group reported having irregular periods while training. They also had increased bone turnover, a risk factor for stress fractures.

The DXA testing showed that women with a history of stress fractures also had lower hip bone mineral density compared to the other group. This suggests a decreased bone strength which could lead to injury.

"DXA for bone density and blood testing for bone markers are not routinely performed in this population – they are usually reserved for post-menopausal women – so we may be missing important clinical indicators for stress fractures in these women," Johnston said.

"While the link between menstrual changes and bone strength is unclear, our findings also indicate that asking female runners about any menstrual irregularities during heavier training times is important during routine screening."

The second study focused on the female runners' self-perception of the risk for stress fracture. The women were asked in interviews about their knowledge of risk factors and proper training regimens.

Overall, the women with a history of stress fractures increased their training load more quickly than the other women and didn't make as much time for a healthy diet. They also were less likely to cross-train, which is better for full-body bone health, and more likely to push through pain and keep running when injured.

"In the interviews, it sounded like these women had trouble knowing which pain was normal, and which pain was abnormal," Johnston said. "They also reported not always receiving appropriate guidance from health care providers on how to progress running safely."

Based on their findings, Johnston and her team recommend more thorough and routine screening for bone density and strength. They also recommend a more comprehensive education plan that includes the need to listen to the body's pain cues and the benefits of cross-training.

"It is clear that there needs to be more guidance from health care providers for women runners on how to prevent stress fractures," Dr. Jeremy Close, associate professor in family and sports medicine added. "It can be very frustrating for these women who are on a path to wellness, but are impeded by an injury that can take several months to heal. If they don't have the proper guidance on how to return to running safely, they risk a second injury."