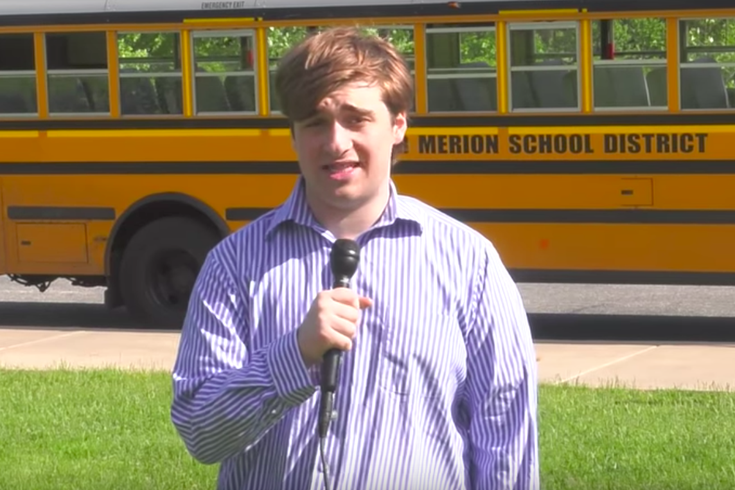 Ricky Sayer reporting his story on school buses not stopping at the stop sign while exiting the parking lot for Harriton High School.

A seasoned student journalist's final news report before graduating is having an effect on school safety policy — and causing a stir among some employees.

Ricky Sayer spent the past four years at Harriton High School in Lower Merion making a name for himself as "Ricky Reports" in his weekly broadcasts, covering news at the school and beyond, including interviewing  congressmen and presidential candidates.

His work has earned him a profile in the Inquirer and acceptance to Syracuse University's prestigious Newhouse School of Public Communications, where he'll attend this fall and study to become a network producer or an investigative reporter.

To wrap up his far-from amateur career at Harriton, Sayer turned his attention to an issue he saw as potentially jeopardizing the safety of students and parents: Many bus drivers exiting the school's parking lot onto Ithan Avenue failed to stop at the stop sign posted there.

"I've noticed the situation for a while, but I didn’t become concerned about it until I was cut off by a bus," Sayer told PhillyVoice.

For a month and a half, Sayer semi-covertly compiled footage of drivers performing rolling stops or not stopping at all before they pulled onto Ithan Avenue, filming them after school on seven different occasions.

(This didn't come without some odd stares from classmates. Despite most knowing his work as a student journalist, he said some gave him funny looks while he was hiding out in bushes, especially the one day during a thunderstorm.)

Sayer said 57 percent of the buses he observed leaving Harriton High School didn't stop. He even took trips to film at nearby Gladwyne Elementary School and Welsh Valley Middle School, where said he found 67 percent and 88 percent didn't stop, respectively.

Lower Merion safety foreman Richard Segal told Sayer the buses should be stopping, and after being presented with the video, transportation supervisor Uldis Vilcins wrote said he would make the drivers "aware of this deviation from correct procedures."

Towards the end of his reporting, when Sayer stood more visible to the drivers than before, he said noticed the they were actually stopping. He later found out drivers had received a text advising them to stop.

You can watch the rather exhaustive report below:

The footage will now be used as a training video for drivers. Vilcins told PhillyVoice that school officials "appreciate the attention to bus safety," and noted the district's "commitment to continuous improvement."

"We will make every effort to ensure that all drivers are observing safe and responsible driving practices," Vilcins said.

Sayer's report also caught blowback from drivers. "They are not happy with me," Sayer said. "That is extremely clear."

Leo Alfonso, a driver for Lower Merion School District who knows Sayer from driving him for after-school activities, said some bus drivers thought the report was one-sided and sarcastic, especially where Sayer noted how the district's drivers had won a bus safety competition. But Alfonso stood up for Sayer.

"Someone of his caliber should be encouraged to do more reporting because he did it well," Alfonso said.

Sayer said he wasn't mocking the drivers by pointing out their award. Instead, he was showing the apparent discrepancy between the district's high standards and the apparent safety violations.

"I think many would say it's somewhat ironic that a bus fleet with such a good record could have such a clear accident-waiting-to-happen situation," Sayer said. He also noted no bus drivers would be interviewed on camera.

Sayer's piece seems to have accomplished what good investigative journalism sets out to do: It raised awareness and got people talking about solutions to an issue. In additional Segal's warning to Lower Merion's drivers, Alfonso said he plans to further discuss the issue with school officials.

As for Sayer, he's not done quite with exploring stories surrounding Harriton High School, even after graduation. He's currently working on a documentary called "Does Harriton Have Spirit?"

"Everyone says my high school doesn’t have spirit, I'm making a documentary to prove those people wrong," he said.