They tend to select monochromatic filters, and one in particular, researchers say

The images people post to their Instagram accounts can reveal signs of depression, according to a study published Tuesday by EPJ Data Science.

People with depression tend to post images that are more blue, dark and gray, according to the study. Their images generated less "likes" but received more comments.

People with depression also tended to use fewer filters than others. But when they did, they disproportionately used the "Inkwell" filter, which removes all color from the image. They also favored the "Crema," "Willow" and "Reyes" filters.

People without depression overwhelmingly favored the "Valencia" filter, which lightens the tint of the image. They also tended to use "X-Pro II," "Hefe," "Amaro," "Rise" and "Lo-fi." 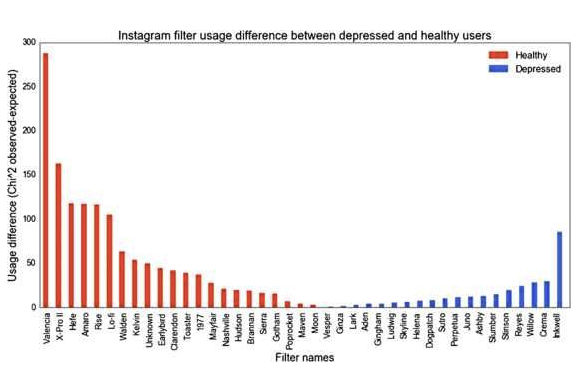 Instagram users with depression tend to use filters that transform an image into black and white, a study found.

The study used Instagram data from 166 people, including 71 individuals with a history of depression. Researchers Andrew G. Reece, of Harvard University, and Christopher M. Danforth, of the University of Vermont, examined more than 43,000 photos, using color analysis, metadata components and algorithmic face detection to determine their results.

"Depressed Instagram users in our sample had an outsized preference for filtering out all color from posted photos, and showed an aversion to artificially lightening photos, compared to non-depressed controls," the researchers wrote. "These results matched well with the literature linking depression and a preference for darker, bluer and monochromatic colors."