An alarming rise in the rate of maternal mortality in the United States is even more troubling of late in Philadelphia, according to a report released by the city's Department of Public Health.

To identify the most prominent risk factors and areas where maternal care is deficient in Philadelphia, the MMR team completed a closer examination of those 55 cases. Nineteen of the deaths were found to be pregnancy-related, and among various social determinants such as poverty, living conditions, violence, and addiction, the study found that African American women comprised a majority of the cases included in the study.

Of the 55 women who died during this period, 25 percent had a known history of intimate partner violence, while 18 of the the 19 women who died of complications related to pregnancy were on Medicaid or had no insurance at all. Among those 19 women, the study found that healthcare providers would have had a "good chance" to alter the outcome of only one case, compared to seven with "some chance" and 11 with no chance. 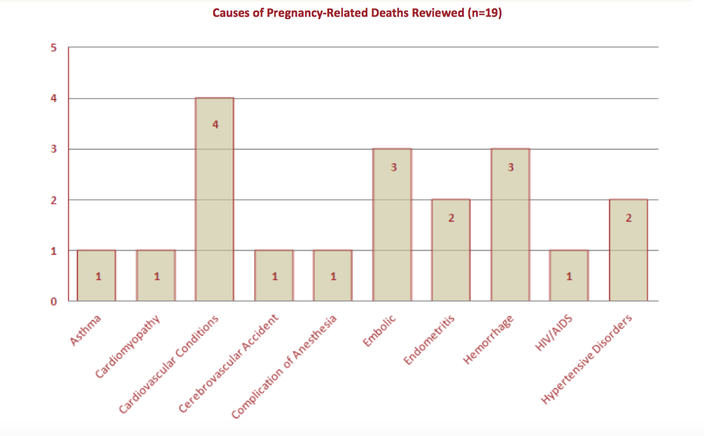 According to Julie Cristol, a member of the MMR team and director of clinical services at the Bryn Mawr-based LifeCycle WomanCare, Philadelphia's high rate was not a reflection of any specific medical care provider, the Philadelphia Business Journal reports. Instead, the issue stems from a lack of integration among specialists in obstetrical care, mental health and substance abuse services, and social service agencies.

Echoing this view is the American Congress of Obstetricians and Gynecologists, whose vice president, Barbara S. Levy, recently outlined the Alliance for Innovation on Maternal Health (AIM) project in an interview with MedScape.

It's an alliance of many groups, including neonatal and women's health nurses, nurse-midwives, physicians, and state and territorial health offices—the Medicaid providers—and it's focusing on maternal health and safety before, during, and after pregnancy...

AIM is new, so we're just rolling out our program. But the bundles of care and the systems that we're using have been rolled out in California, and more recently in New York. Using exactly the maternal safety approaches that we are incorporating into the AIM program, California has been able to reduce its maternal mortality by 50% in 2013 from when it started in 2008.

The MMR team released its own set of eight recommendations to improve Philadelphia's maternal mortality rate. The team, made up of 30 members from agencies representing professionals involved in maternal care,  was recreated by the Philadelphia Department of Public Health in 2010 after a similar unit was dissolved in 2008.

Globally, since 1990, the United States is the only developed country where infant mortality rates have increased. The World Health Organization's most recent data can be viewed here.