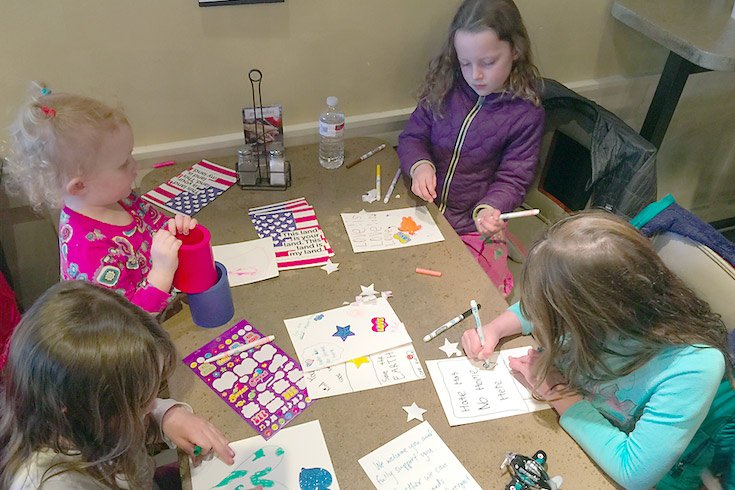 What started as a Facebook interaction in January brought about a 'postcard party' for suburban children to draw welcoming messages for their peers at The Islamic Education School in West Philadelphia on Sunday, February 26, 2017.

Eloise, Millie, Grace and Julia sat at a table in a suburban Cosi location with Crayola markers, stickers and patriotic postcards on Sunday.

There, they let their hearts and imaginations pave the way for small gestures of kindness that went a long way toward making others feel welcome.

“It feels good, helping people,” said Eloise, a first grader drawing a “Hate Has No Home Here” sign on the back of a postcard emblazoned with the stars, stripes and lyrics: “This land is your land. This land is my land. This land was made for you and me.”

Millie, her second-grade friend, smiled and nodded in agreement as the quartet continued working on messages of inclusion for children at The Islamic Education School (T.I.E.S.), a daycare though eighth grade school located near 45th and Walnut in West Philadelphia.

The roots of Sunday night’s “Postcard Party” in Elkins Park, Montgomery County were planted back in January.

It was through that exchange – on a social-media platform not exactly known for friendly political exchanges these days – that she came to e-know Minal Nachef, Walid Dimachkie and their community of about 150 students at T.I.E.S.

According to Shuster, the school’s principal told her how touched she was that University of Pennsylvania students stopped by the school’s campus in a show of support at the height of the immigration ban controversy.

Through those discussions, an idea was born to not only deliver hundreds of supportive, kid-drawn postcards over to West Philadelphia, but have a book drive to help T.I.E.S. fill its library shelves.

“We really wanted to do something special,” Shuster said. “We wanted to make this a beautiful day.” 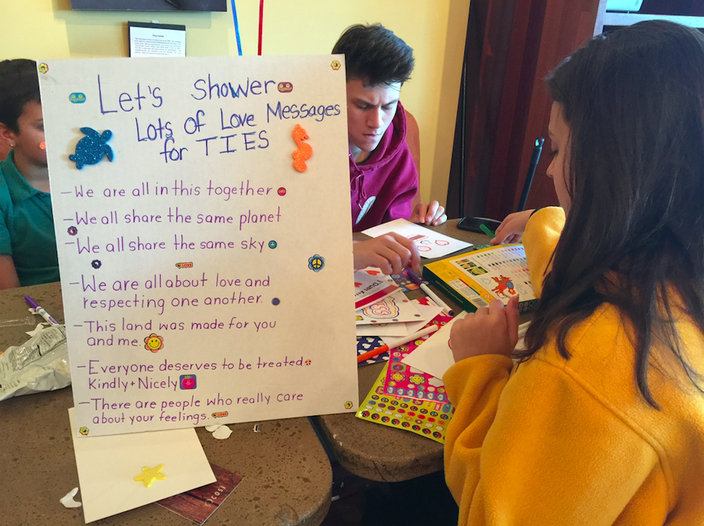 The Cosi location in Elkins Park was packed on Sunday afternoon thanks to a 'postcard party' organized by residents to send a message of inclusion to those at The Islamic Education School in West Philadelphia.

With word spread by the Cedarbrook Middle School PTO, Hate Has No Home Here Glenside and other interested parties via social media, the Cosi location was packed after 4 p.m. Sunday.

“(When Trump announced his ban), we wanted to help the local Islamic community, to let them know that we care about them,” said Shuster’s husband Stephen, a reading therapist who serves T.I.E.S.

What Nachef, who works at T.I.E.S.’s daycare, and Dimachkie, who oversees its community center, had to say at Cosi speaks to the success of the postcard-creator’s intentions.

“This is what I expected of America when I came here,” said Dimachkie, who emigrated from Lebanon in the early 1990s. “Acceptance. Unity. … America is not about isolation and divisiveness.”

“It reminded us that we’re all here together,” added Nachef, who was born in the United States. 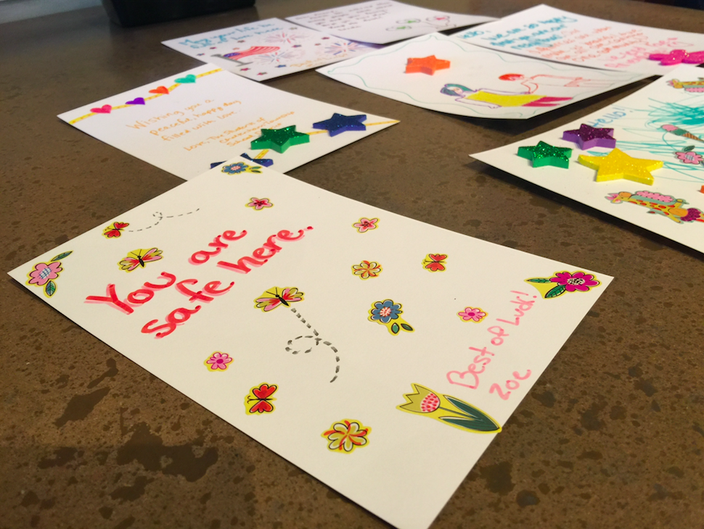 Children and adults alike drew cards that will be delivered to students at The Islamic Education School in West Philadelphia during a 'postcard party' held at a Elkins Park restaurant on Sunday, February 26, 2017.

Dimachkie noted that T.I.E.S. students aren’t subject to the divisive rhetoric that defines the national conversation on the topic, since West Philadelphia residents have been nothing short of accepting of the school.

Thanks to that postcard party – Kate Thomson brought 750 with her on Sunday – T.I.E.S. plans to host one of its own in West Philadelphia. That way, people from outside of the city can come to Philadelphia and see what their school’s all about.

“Part of the reason people came to America in the first place was to flee the situation that we’re seeing today,” he said. This sort of event tells T.I.E.S. students that “You’re not alone. They’re very aware of what’s going on here today, and they want to know how they can reciprocate.”