Nearly 600 state employees who help provide Pennsylvania’s unemployment services are suddenly out of work, right before the holidays.

If you ask Gov. Tom Wolf, it's state Senate Republicans who failed to vote on releasing $57.5 million in funding to the Department of Labor & Industry. If you ask Sen. Scott Wagner (a man planning to challenge Wolf in 2018) and his fellow Republicans,  the governor failed to provide enough information about that money.

House Bill 2375, introduced by a Republican legislator, passed the House by a vote of 175-13. It would have added an extra year to a four-year plan – set to expire this year – to update the state's outdated unemployment services.

But the Senate didn't vote on the bill when it convened for the final time this year in November. A day later, the state Department of Labor & Industry announced the layoffs and closing of three of its eight call centers: Altoona, Lancaster and Allentown. Pennsylvanians can call those centers to get information about unemployment benefits.

Now those calling the department's hotline for information about their benefits will likely experience longer wait times. Cutting a statewide staff in half will clearly have that effect, Labor department press secretary Sara Goulet said.

Wolf and the Labor department quickly pointed the finger at Senate Republicans. Wagner, the man who reportedly led the 11th-hour charge against the extension, has been on a save-face tour ever since.

Problems with the state's unemployment services go back to 2006. IBM was handed a contract to update the department's 40-year-old computer system. But the global company repeatedly missed deadlines while going $60 million over budget; the state essentially fired the firm in 2013.

Federal funding for Pennsylvania's unemployment services was declining around this time due, in part, to a difficulty in filing claims. With those funds largely dependent on the number of unemployment claims filed in-state, Pennsylvania was getting less each year. Among the issues, the department had problems with its phone system, with callers to its unemployment centers experiencing wait times as long as two hours.

"So we give them an extension, and they come back next year with no product? At some point you have to say enough is enough." – state Sen. Scott Wagner

So the legislature came up with a four-year plan, titled Act 34, that took effect in January 2013. Tax money already collected from workers across the state for unemployment services, normally deposited into a trust fund, would be diverted to a separate Service and Infrastructure Improvement Fund (SIIF). The fund would enable the department to continue improvements to computer and phone systems and increase the number of claims it processed and, therefore, reverse the decline in federal funding.

The department says it has made significant strides since then – reducing call times and wait times on appeals claims – all while slowly cutting staff by attrition. But federal funding continues to decline as talks have stalled at the U.S. Department of Labor on how to better fund services for big states. As a result, the state officials started talking in April with lawmakers about an extension.

It seemed like a no-brainer, according to Goulet, who said the department's been nothing but transparent in explaining why the reauthorization was needed.

"This was an irresponsible decision that truly hurts Pennsylvanians."– Jeffrey Sheridan, spokesman for Gov. Tom Wolf

"We were very clear in our message throughout this, we were absolutely happy to make changes," Goulet said.

Goulet pointed to documents sent to the state Senate and House (and published online by Wolf) over the course of six months that detailed that progress, explained the need for reauthorization and spelled out the consequences if an extra year wasn't approved.

An August document sent to lawmakers states: "Bottom line, failure to extend Act 34 would reduce UC funding by approximately 27 percent, result in significant furloughs of staff, and severe degradation of our ability to serve claimants and employers."

On top of that, current modernization efforts that aim to cut operational costs in the long run will have to be tabled.

The extension passed the House, but the Nov. 16 Senate vote — a vote Republican leadership assured the governor would happen, according to Wolf's spokesperson — never came. Why? Wagner, who noted that he and fellow GOP senators caucused the day of the scheduled vote, said he was outraged to find that after four years of diverting funding, there was "nothing to show for it."

"So we give them an extension, and they come back next year with no product? At some point you have to say enough is enough," Wagner told PhillyVoice.

Wagner claimed the Wolf administration could find the $57 million in discretionary spending elsewhere, and said the governor is choosing to lay off workers to make a political point. He added, offhand, in his interview with PhillyVoice that he thinks Wolf is just "mad because Hillary Clinton isn’t the president," and noted that all three of the call centers to be closed are in Republican Senate districts.

Wolf spokesperson Jeffrey Sheridan, sounding exhausted upon hearing Wagner's claims, said, "We don’t have 57 million lying around." Politics had "nothing to do" with the centers that were closed, Sheridan said.

"I won't even call it a snapshot – it's insufficient information," said Michael Cortez, executive director of the Senate's Labor & Industry Committee

Sheridan said the recent media blitz led by Wagner is an attempt to divert people's attention from the protests outside his office "because they realize that was a bad decision." He, like Goulet, likes to point out that the bill wasn't even seeking more money from another source.

"This was an irresponsible decision that truly hurts Pennsylvanians," said Sheridan, who said things would only get worse as services suffer because of the lack of funding and necessary improvements.

Sheridan maintains that Wolf's office was an open book for information in working with the legislature to get the extension passed. The decision not to vote caught the administration completely by surprise, he said. 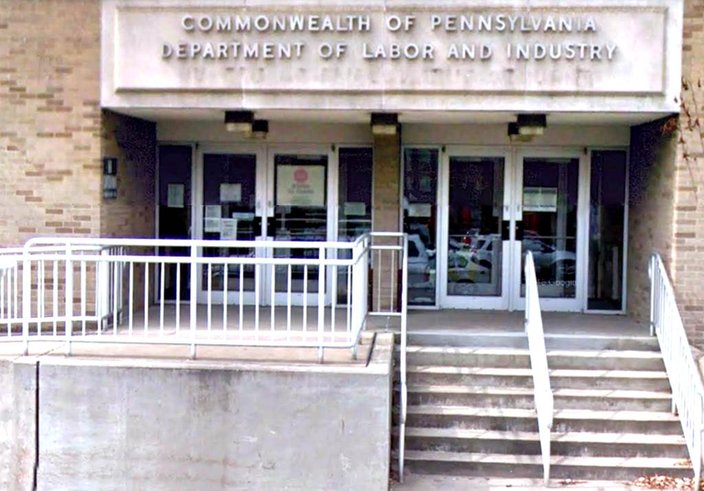 This state unemployment office in Erie is among the five of eight that will remain open. Offices in Allentown, Lancaster and Altoona will close as 600 employees of the state Department and Industry were given layoff notices.

A Baker spokesperson also said "multiple people" in the Senate had asked for the information requested in the audit during the legislative process; Sheridan said it was "convenient" that Baker is asking for it now "in attempt to pass blame for her caucus' decision to hurt working families."

Michael Cortez, executive director for the committee, couldn't speak for the GOP caucus' decision not to bring the bill up for a vote. But he did explain the heavy reservation toward giving the fund even a one-year extension.

"They had the solution in front of them and didn't vote on it." – Sara Goulet, state Department of Labor & Industry spokeswoman

Asked directly if the Senate had requested specific information from Wolf or the Labor department that was never received, Cortez sidestepped, saying that in previous requests "there's not a whole lot of information, and what we get is wrong."

SIIF administrators are supposed to publish an annual report detailing its progress and spending, but none was forthcoming before this year – and frankly, no one had asked for it. So it was a surprise to Cortez and his staff when the annual report arrived in January. Cortez said the short report fell apart under scrutiny.

Since then, the information they've requested and received has been brief and unhelpful, he said.

"I won't even call it a snapshot – it's insufficient information," Cortez said, pointing to the documents published on Wolf's website. He said the department "hadn't made the case" for the extension, and that there was no clear plan as to how the department would eventually ween itself off SIIF.

In one document sent to lawmakers, the department doesn't put a specific timeline on an exit strategy, noting that federal funds continue to decline and benefit modernization would take "several years." But Goulet said after successfully working with the House she thought it was clear that the extension was a very temporary solution — take a year, have the department audited and continue to work on an exit strategy.

The cold irony now is that the Labor department is helping those laid off with unemployment services; the layoffs went from the top down, and Goulet lost two people from her office.

Trying to get past the "blame game" at this point, Goulet said the department will work in January to provide information to the legislature to try and fix a "wounded" unemployment services system. The department has also tried taking steps to help claimants in light of the reduced staff, such as an upcoming instructional video and updates to the website.

But, Goulet added, "They had the solution in front of them and didn't vote on it."