Summer camp for teens puts CSI careers under a microscope 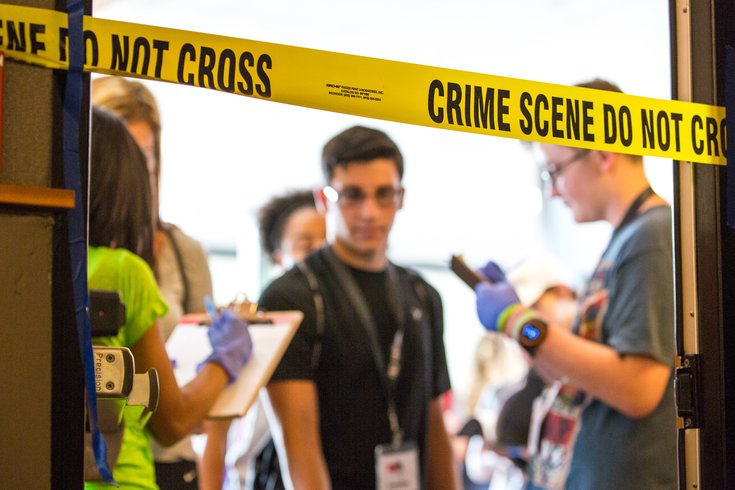 Campers enter the simulated crime scene area where they are tasked with investigating a double-murder during the "Stockton CSI Camp" at Stockton University in Atlantic County, N.J.

A shocking scene greets first responders: A professor dead, face up on the floor of an auditorium at a South Jersey university, a pool of blood seeped onto the floor.

Clues – or are they simply random trash and debris? – fill the auditorium.

Among the material: drinking straws, a mirror, footprints, an earring, a DVD. Are they evidence? Or just trash?

And wait, what’s way up here? Feet from a balcony exit door high up in the auditorium, another victim – a teaching assistant – is face down, an ooze of pooled blood beneath her head.

Among the many clues are two shell casings, obviously from a small-caliber gun.

One is near the professor, “Dr. Zoology”; the other near the second victim, “Felicity.”

There are two slugs; one will soon be found, marked, catalogued and collected.

As happens sometimes with real-life crime scenes, the other slug is overlooked, left behind as the scene is cleared by 26 students.

But not to worry.

After all, Joshua Duntley and Christine Tartaro planted it. They staged the whole "murder" scenario, as they will twice more this summer – though with different plots.

They came up with the current plot – an angry college student confronting and killing the professor after a run-in over a grade. The teaching assistant was simply a victim of being in the wrong place at the right time.

This particular murder scenario is based on a sober reality: studies show killing a professor is a relatively common fantasy among college students, Duntley explained.

Think of the residential CSI experience at Stockton as sussing out a 3-D version of the popular board game “Clue” with lots of science and oodles of mundane work – particularly paperwork – and many other reality checks thrown in for good measure.

While the camp encourages many of the high school students at the camp who have spent countless nights watching “CSI,” “Criminal Minds” and “NCIS” who think they want a career in law, police work or forensics, it also serves as a brake for some.

The camp is one big cautionary warning for the many teens unaware of the huge liberties taken by those dramatized crime shows. 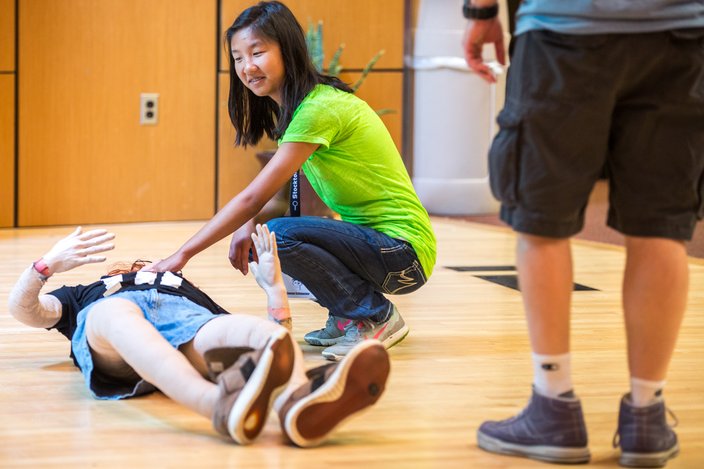 For example, campers learned there are just a handful of profilers at the FBI – with offices in the basement. A jet and four-star hotel do not come with the job. Lab work stacks up, often for months. Time and cost limits the amount of crime-scene evidence that can be analyzed.

“It crushed my dreams,” Metuchen, N.J. native Kate Kornitas, 17, said after hearing about the realities from Duntley, who specializes in criminal justice and psychology, and Tartaro, who studies prisons and jails and mental illness and suicide in correctional facilities.

She was not entirely let down. She realized having the unique hands-on camp on her resume will help her find criminal justice career-oriented jobs – maybe just not as a profiler. 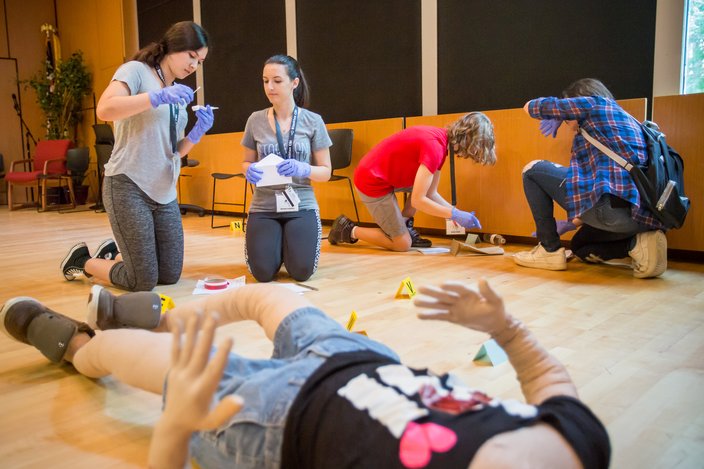 Arianna Pena and Michelle Pomponio of Nutley, N.J. collect evidence at the “crime scene” near one of the victims.

Kornitas had taken online instruction in forensics and the psychology of crime before experiencing the work in a first-hand way at Stockton, which cost $859 for the week-long camp, including room and board. Campers become part of an investigative team to help solve a murder. From crime scene investigation to the courtroom, they are immersed in the legal process.

Despite the reality check, she prefers the intimate experience at Stockton. That’s because she still thinks she’ll pursue something in psychology or criminology when she eventually attends Rutgers University in New Brunswick, where her father works.

She located and marked evidence alongside Nicholas Maher, who appears pretty much fated to end up in law enforcement: he has a brother, two uncles and a cousin who have made careers as cops. 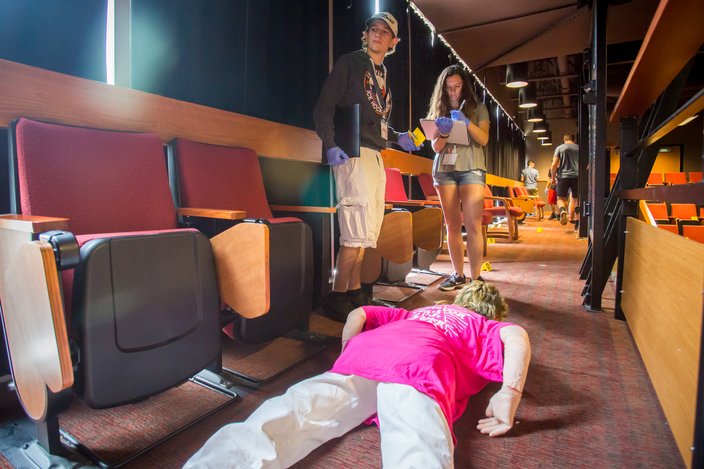 Nicholas Maher of Queens, N.Y. and Kate Kornitas of Metuchen, N.J. use evidence markers to record the location of elements of the scene that may be relevant to solving the crime. Kornitas records evidence details while Maher looks over at a lead slug from a bullet found near the second victim.

The 17-year-old Queens, N.Y. native said he is interested in the “biology side” of law enforcement – maybe forensic investigation or DNA analysis.

On the first day of camp, he learned he hates paperwork. But he also knows poor paperwork can weaken a case in court.

The innovative program attracts students from near and far.

Among them were Maya Mendoza, a 16-year-old from Havertown, Delaware County, who discovered the course while exploring online. Shanae Schmucker, 16, came the farthest, flying in from Kansas. 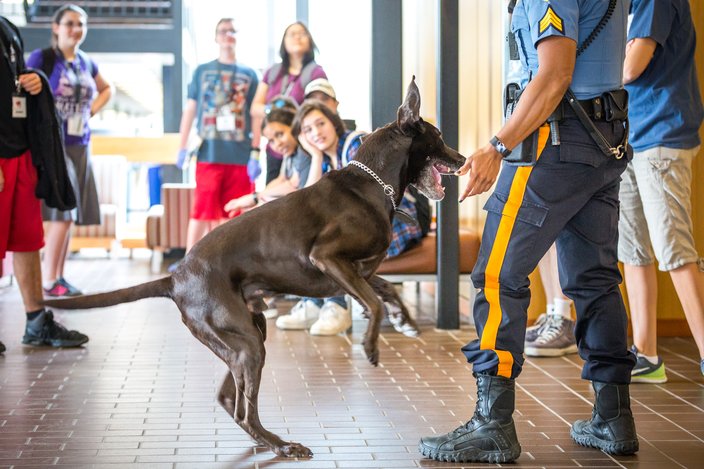 Police Sgt. Tracy Stuart and K-9 Officer Hemi prepare to give a demonstration on how police K-9s use their scent to search for drugs and bombs at the summer camp on Monday, July 17, 2017.

For Schmucker, who lives in a tiny rural town dominated by Amish, the week at Stockton meant a chance to be surrounded by students with similar interests. She likes psychology and is fascinated by “how different minds work.”

Like other students reared on the current crop of tech-driven crime dramas – she’s a fan of CBS' “Criminal Minds” – Schmucker was a bit taken aback learning that investigating and solving crimes is not nearly as tidy as portrayed.

Nationally only around 63 percent of murders are solved. In big urban areas, the solve rate is generally far lower, often in the 30 to upper 40 percent range.

"But it made sense,” she said.

Duntley chose a .22 caliber as a "murder" weapon precisely to show the students that the "aha" of ballistics scene in crime dramas is often more of a "hmm." 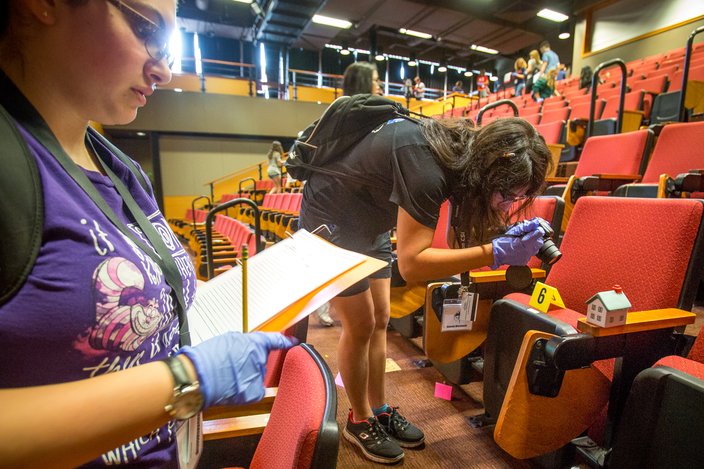 Campers are split into teams and given different roles to locate, record, document and collect evidence and observations of the crime scene as they scour the area for clues.

The .22 caliber is notoriously difficult. Matching the striations on a .22 bullet with a particular weapon is very inexact. The professors want the students to understand that there are limits to the science – something hich crime shows breeze over.

As well as ballistics, students also learn about examining and testing other evidence, visiting the Atlantic County Medical Examiner’s Office when bodies are autopsied, how to interrogate suspects, and they even how to prepare a case for trial and finally learn about prison life.

During the course of the week, students will peel back the elaborate backstory of what led up to the murders. The spoilers are here. 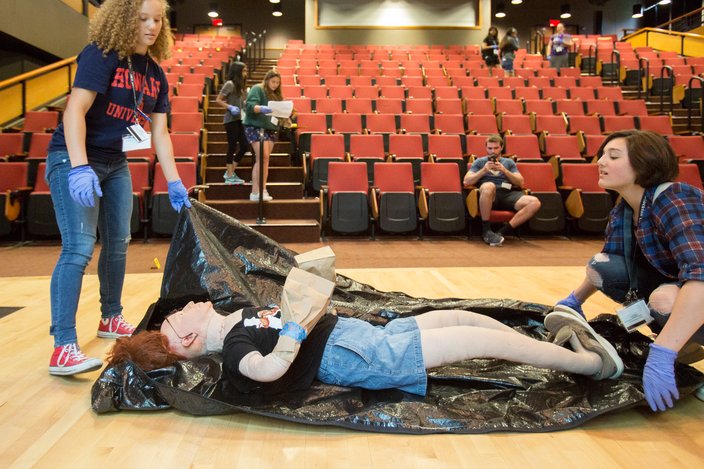 Isabella Hargesheimer of Philadelphia and Bridget McLearie of Bergen City, N.J. place a victim in a body bag during a simulated crime scene investigation at Stockton University's “Stockton CSI Camp.”

Over the years, the professors have learned a few things during camp:

• All scene sessions are now inside, because of weather, ticks and mosquitoes

• The Transportation Security Administration is now part of the curriculum.

And one last thing: Tartaro is in charge of accounting for the lunch money and keeping the timing on track because Duntley is prone to getting lost in extended storytelling. 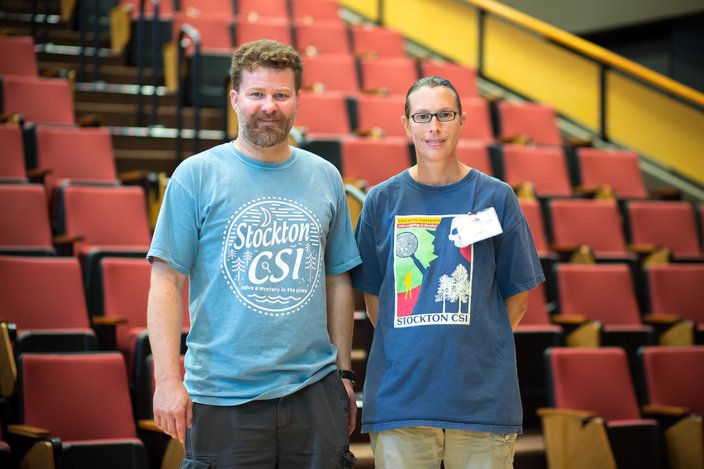 The directors of the 'Stockton CSI Summer Camp,' Dr. Joshua Duntley, left and Dr. Christine Tartaro pose for a photo in the university auditorium used for the simulated crime scene investigation.

“I threatened to leave him behind,” Tartaro explained as she cut short a Duntley story about a study which shows murder rates in America have dropped largely due to advances in emergency medicine, not more effective policing or the improved nature of people.

"Were still pretty much the same people as we were," when murder rates were at their highest in the 1970s, said Duntley as he hustled to catch up with Tartaro and a van filled with eager CSI students on their way to the morgue.

There is still time to sign up for two more CSI sessions this summer with just a few slots open, or to get on the list for next summer. The details are here.