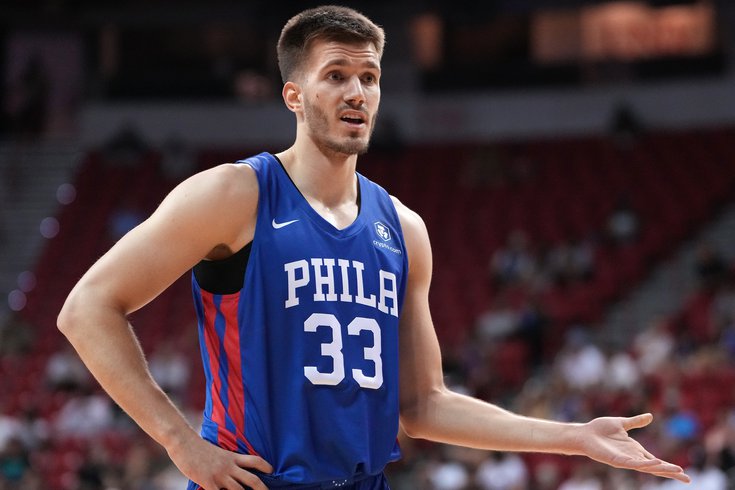 Filip Petrusev suiting up for the Sixers in the Las Vegas Summer League.

The Sixers and Heat did their best to make viewers question why they like basketball in the first place, with the Sixers ultimately emerging victorious in a 75-71 slugfest.

Here's what I saw so you didn't have to.

• The book on Filip Petrusev has long been that you can't trust him as a defender in space. It hasn't jumped out as a glaring problem in Las Vegas, and in a stretch of games where I think he has handled himself pretty well, I would argue this was his best effort yet.

For Petrusev, it seems to start with a strong understanding of who he is and what his limitations are. Compared to Philly's bouncier, more athletic bigs, you don't see Petrusev leaping all over the place and chasing lots of blocked shots. Instead, he has used that energy to get to spots and trust his length to dissuade would-be finishers at the rim. On occasion, Petrusev will block a shot as a helper or through pure size, but it's more important for him to simply be in the right place at the right time.

When that's the big positive takeaway for the game, you can guess how entertaining it was without having watched it.

• Michael Foster Jr. has a little something to him.

• The game ended. And the Sixers won! You won't be able to tell that from this recap if I don't make sure to write that.

• Finally, the Trevelin Queen experience leaned toward the positive end of the spectrum. All those ideas he had as a creator and the confidence he had as a shooter were finally rewarded on Wednesday night, with Queen getting an early shot to drop and then canning two more threes before the first half had ended. Queen possesses something that you wish the Sixers could transfer to some of their most important players — confidence as a shooter. The moment a ball touches his hands, he feels that he is within range of a make if he's able to get the shot up. If anything, a bit more discretion might be the key to him carving out an NBA role.

His best basketball skill, though, is almost certainly his passing, assuming he makes the correct read at the front end of a play. Mechanically, he has all sorts of passes in the bag, each of them with a lot of velocity on them. It can work against him sometimes, with teammates occasionally not prepared for a zinger to fly by their face, but it allows him to make incisive passes in transition and beautiful, threaded feeds to bigs rolling toward the rim. Cassius Winston has been their most consistent playmaker, but Queen has been their loudest.

Unfortunately for Queen, you have to play two halves to finish a basketball game. His performance went off of a cliff after halftime.

Even before the shots stopped dropping and the turnovers piled up, there were still moments of audacious confidence from Queen, including an inbounds play where he took a twisting three coming off of a screen for seemingly no reason other than he needed to get the ball out of his hands. Minutes prior to that moment, Queen rose for an above-the-break three before he realized how close a defender was to him, tried to ad-lib into a pass in mid-air, and ended up turning the ball over.

The guy isn't a finished product, we can all agree on that. What he turns into is hard to figure out on a moment-to-moment basis, but he will get to where he's going while causing a scene one way or another.

• I've had to qualify Charles Bassey's performances with the same intro constantly, and it should be repeated once again — it's hard to conclude much of anything about his offensive output when he's dealing with this level of guard play. He's not a self-creator and shouldn't be asked to be one, though he rarely even got the opportunity to do that on Wednesday. Lobs and passes on rolls weren't there, so Bassey spent a lot of time doing a whole lot of nothing.

The defensive side of the ball has been a much bigger disappointment. It's not that Bassey is incapable of making statement plays, because he had a number of nice blocks in this one. But he's too much of a boom-or-bust guy at this stage of his career. When the timing matches his tools, he looks spectacular. Coaches will pay much closer attention to the times where he takes himself out of a potential rebounding opportunity by skying for a block he can't get, leaving his man alone by the rim for a quick follow.

It wasn't all his fault in those situations, with leaky perimeter defense putting him in a tough spot a few times, but that's life as a center at the highest levels. You're the anchor of the defense back there and need to master using your length to bother guys without jumping out of the frame and becoming worthless if you're successful in forcing a miss.

Paul Reed may be a bit raw with issues of his own, but the takeaway at this point is that he's far out in front of Bassey for the backup center job. In fact, if it wasn't for the fact that Doc Rivers might end up playing one 20 minutes a night, I might recommend looking at vet big options.

• I don't mean to overreact to Summer League, but I think it would be hard for a guy on a two-way deal to be less inspiring than Julian Champagnie has been for Philly. A made three in the first half aside, he was either totally anonymous or actively bad for most of the game, following the pattern that at this point has become familiar. Certainly deserves some time to settle in, but it is hard to come up with nice things to say about him.

• I have to tell you, a game in the second week of Summer League with none of Paul Reed, Jaden Springer and Isaiah Joe is pretty tough to stay focused for. In a completely unrelated note, we won't be doing Summer League observations for the two games Philly has left in Vegas this weekend, and will instead wrap things up early next week. There are only so many things to say about a Summer League team that doesn't have a first-round pick from this year.

• Rich Hofmann ended up writing a better recap than I could by publishing a single tweet:

This summer league game is a crime against humanity.

I've had about enough of these Summer Sixers. Hard to enjoy a basketball game where nobody can dribble or shoot well.