Tissue engineering is at the intersection of medicine and biology 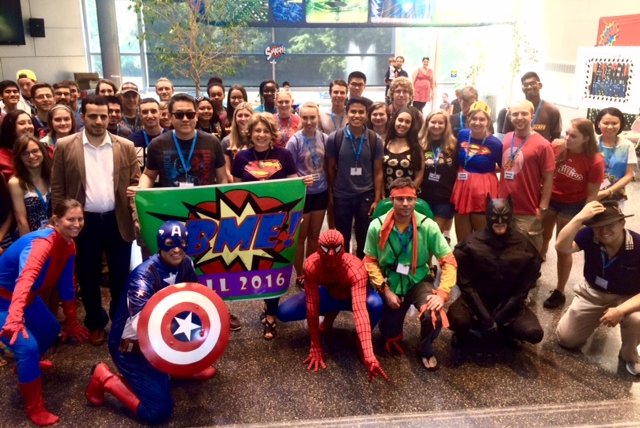 Rowan University's growing tissue engineering department got their nerds on by donning the costumes and T-shirts of superheroes and superheroines as a means of kicking off the new academic year at the Glassboro campus in South Jersey.

At Rowan University on Saturday, it was as if the  "Big Bang Theory" cast had decided to throw a costume party to help students and faculty get their nerds on.

How else to explain a gathering of superheroes and superheroines assembled in costume, intent on a bit of socializing before the grind of engineering – tissue engineering to be exact.

Biomedical tissue engineering is at the intersection of medicine and biology, with the focus on the improvement of heath care systems. It's an extension of the traditional engineering that has made a name for Rowan.

The idea behind the costumes was to create a family atmosphere between faculty and students at the start of the academic year, explained Byrne, and inventor and businessman – as well as an academic.

Showing he is not quite superhuman, he had to ask his wife, Susan Byrne, why she'd chosen a Captain America costume for him to wear.

"Because he's in charge!" his wife, Susan Byrne, also in costume, beamed brightly

"That's it," said Byrne nodding, even though he knew he may be in charge at work, that may not be the reality at home.

"Captain America makes things run the right way, the way they should," he said, picking up steam. "He does things the right way."

A former professor and researcher at Auburn University, Byrne said being a role model for students in the emerging tech field was also important part of the event.

Nicholas Mann, 20 a junior at Rowan, sported a Flash T-shirt.

"It's what I had, but I really like Ironman more because he uses his brain, not his muscle power," Mann said. "He's an engineer."

Mann, of Bridgewater, said he loves the Rowan program because it emphasizes hands-on learning.

Laura Osurno, 27, a doctoral student, eschewed the superheroine attire Saturday, going instead with a floral top. But she admitted to liking Supergirl because a.) "she's pretty" and b.) "because she's a girl."

The Blackwood, Camden County resident, who sees herself founding her own tissue engineering company, liked the event.

"It's good to see the funny side of your professors. We see them in suits. This helps to get to know them," she explained.