Similarly, Philly experienced it's own 'Oceans 8' moment in 2015 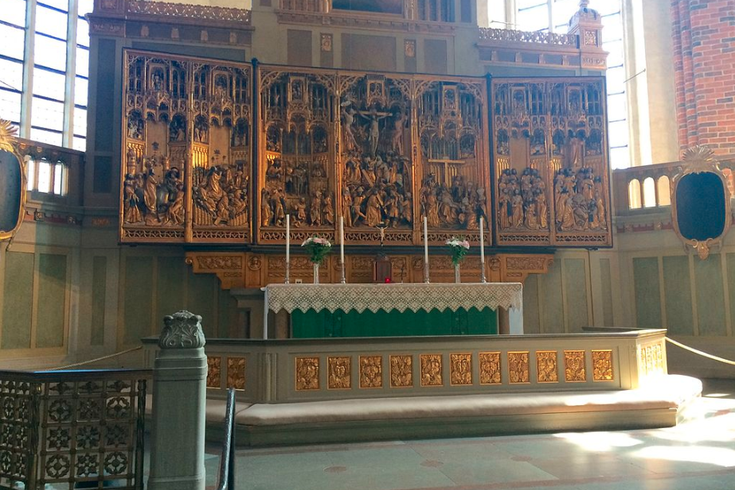 Inside the Strängnäs Cathedral, showing detail of the sanctuary.

In a somewhat "Oceans 8" fashion, two thieves stole two crowns and an orb in broad daylight during a public luncheon at the Strängnäs Cathedral in Sweden yesterday. The crown jewels were on display in an alarm-locked glass box.

The two crowns were burial crowns from 1611 for King Karl IX and Queen Kristina. The crown jewels were originally buried but were later exhumed and put on display at the Strängnäs Cathedral, where the royals are buried. The Cathedral, now Lutheran, was originally a Roman Catholic church, and according to the church’s website, began construction around 1250.

Philadelphia experienced its own "Oceans" moment in 2015, when two robbers broke through the wall of a neighboring dry cleaners to gain access to a jewelry store in Center City. They then stole $250,000 in jewelry and cash. A restaurant owner nearby described the heist as "Oceans 11-style."

"It is not possible to put an economic value on this. It is invaluable items of national interest,” he said.

Maria Ellior, of the Swedish police's national operations department, took that thought a step further by adding, "What usually happens with this type of object is that they are recovered sooner or later, because there are very few people who are prepared to handle them. We have high hopes of getting them back.”

The two thieves escaped by speed boat on the Mälaren Lake, which is the third largest freshwater lake in Sweden and spans about 75 miles. But they weren’t exactly the most secretive about it, as witness Tom Rowell mentioned: "I knew immediately they were burglars because of the way they were behaving."

It was also reported that once they broke the glass to steal the jewels, an alarm sounded.

This isn't the first time Sweden has experienced a crown jewel heist. Copies of King Johan III's crown, orb, and scepter were stolen in 2013, but the jewels were found shortly and no one was arrested.