Welcome to the neighborhood 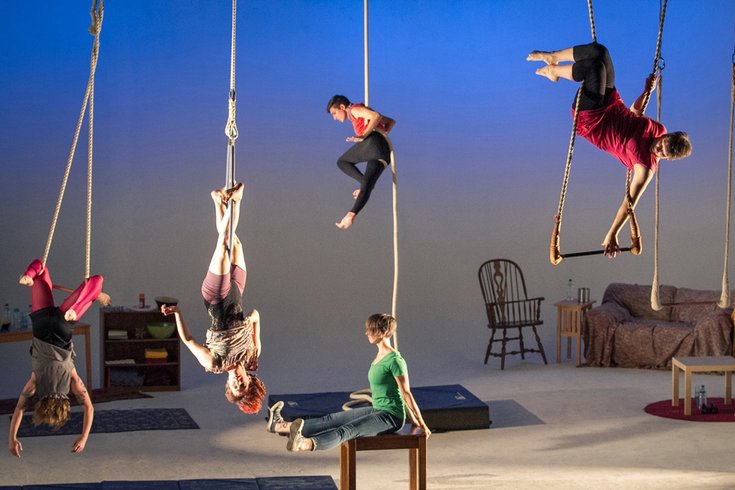 "The Girl's Guide to Neighborly Conduct" will play during the Fringe Festival Sept. 10 through Sept. 12.

When the Tangle Movement Arts company takes the stage during this year's Fringe Fest, some audience members might already know what to expect from the curious-looking set of hanging silks and suspended ropes. Others might be quizzical.

But that's often the case with Tangle. As an all-female aerial dance theater company, Tangle is tough to describe to the uninitiated. They hang from ropes and stuff while performing a play...kind of. It's really cool, just trust me.

Though the circus arts have gone a bit more mainstream in recent years, a citywide festival like Fringe - one that draws audiences unacquainted with the many forms of theater - is bound to create a few surprises.

"The Girl's Guide to Neighborly Conduct" (running Thursday, Sept. 10, through Saturday, Sept. 12) tells the story of six longtime housemates whose domestic bubble is burst by the sudden appearance of a new next-door neighbor. Conflicts and romances soon ensue and a delicate balance must be re-established. Physically as well as within the story, "Neighborly Conduct" juxtaposes the learned clockwork of a bustling household with the calmness, and sometimes loneliness, of living alone.

Anyone who's ever dealt with roommates knows how it feels when the dynamic suddenly shifts. With their Fringe performances, the company wanted to take that universal feeling and give it the Tangle treatment. 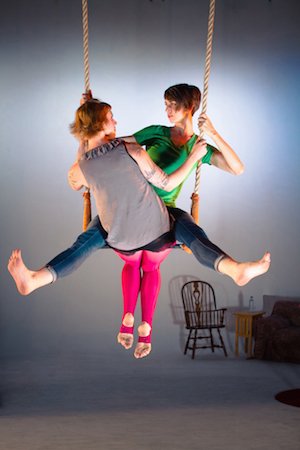 "We got really excited about the way the dense urban environment puts you in close contact with the infinite worlds of people you have no other relationship with other than your neighbors," Tangle founder Lauren Rile Smith told PhillyVoice.

"We got interested in the idea that each home is its own universe."

The company is collaborative, with 10 players who each contribute to the two major shows put on each year and smaller pop-up performances. As Philadelphians, every performer had a story or situation they could add to the "Neighborly Conduct" conversation.

"I think this show, in particular, of our work feels the most related to our lives," Rile Smith said. "Nothing about it is autobiographical, but we had really fun conversations about what kind of roommates there are, how you support your friend if they’re dating someone you don’t like and who you are when you’re living with other people."

To take these everyday situations into the air and onto the stage took months of work. Though the storyline evolved with circus arts in mind, blocking out the performance of an ensemble is no easy task. Collaborating with a handful of equally important players all at once is tough, too, though Rile Smith noted the group's creative process is especially rewarding.

In order to bring any story to life and translate it into circus arts, Rile Smith and the team "literalize the metaphors of human connection." That could mean two artists sharing space in an aerial apparatus just as characters negotiate space in a home, or one player physically supporting the other as a character would emotionally. 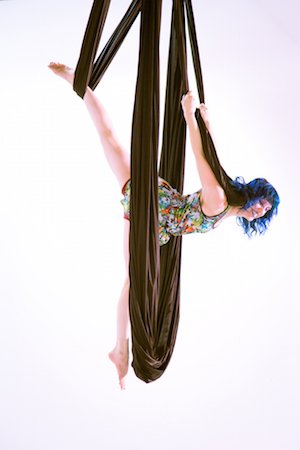 The raw emotions Tangle deals with might seem at odds with the playful nature of circus arts. Many associate the trapeze with a day under the big top, not a deep conversation about what it means to be a friend. But to Rile Smith, it's almost as if the dazzling aspect of Tangle's physical work draws the audience deeper into the story.

"I do think that we have a relationship with our audience where someone comes to see the spectacle of seeing seven people twirling around in the air and comes away with an impression of the range of women’s relationships," she said.

Sharing and exploring that range of womanhood is a defining feature of Tangle's art. Not only is it something that naturally interests the all-female group, it's also a direct reaction to the current media landscape.

"One of the reasons our company is an all-female company is we think frequently in media and live performance that women’s stories are compressed or not emphasized, or that perhaps there’s only one female character [who] has to express all of woman," Rile Smith explained.

So while Fringe audience members new to Tangle won't know exactly what to expect when they sit down for a performance, once the show begins, they're sure to recognize some of the women and their experiences.

While not everyone has been a trapeze artist, many have had a lousy roommate.