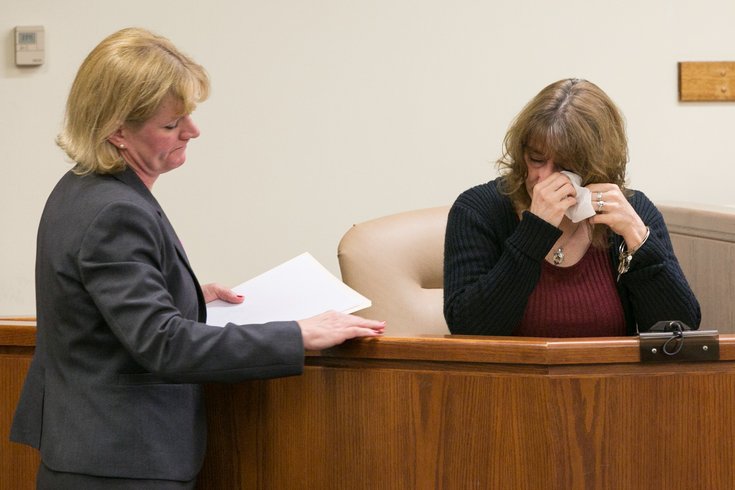 The grandmother of Brendan Creato and the police officer who found his lifeless body each teared up Tuesday while testifying in the murder case against the boy's father, David "DJ" Creato.

Lisa Creato, the child's grandmother, wept while recalling the last night she saw her three-year-old grandson alive, in October 2015.

Looking at pictures entered into evidence of Brendan's pajamas and slippers, she removed her glasses and dabbed away tears as she testified during her son's trial.

She and her daughter, Sarah Creato, had dressed the child for bed after bathing the boy in their home, which is about a block-and-a-half from the apartment the toddler shared with his father in the Westmont section of Haddon Township.

Lisa and Sarah then walked to DJ's apartment, pulling Brendan in a wagon, she testified. She used a screwdriver she routinely carried in the wagon to jimmy open the knob lock on the ground floor, opening to stairs to her son's second-floor apartment.

They stayed for perhaps 30 minutes before leaving the apartment, Lisa Creato testified.

Lisa Creato testified she told her husband, David Creato Sr., about the call in a panic.

"The baby is missing!" she told her husband as she slipped on shoes and ran down Virginia Avenue, running into her son outside his apartment.

She had told her son to call 9-1-1, a call that was played for the jury once again. Lisa Creato can be heard calling for Brendan during the recorded call.

During the call, DJ Creato suggested to the operator that his son had opened their apartment door and wandered away. Soon, a community-wide search for the boy was underway.

During cross-examination by defense lawyer Richard J. Fuschino Jr., Lisa Creato testified that she, her husband and her son were all spiritual. They consulted psychics and believed in spirits. "I pray, I meditate, I have my higher power," she told the jury

Earlier in the week the prosecution had made a point of DJ Creato's taped discussion with Samantha Denoto, his former partner and the mother of his son, that a spirit may have called Brendan to the spot where his body was found.

Nicholson told the jury about her training, especially tracking, and then testified about being dispatched to the Cooper Street apartment at 7:21 a.m. for the report of a missing boy, described as three years old, brown-haired and wearing pajamas. 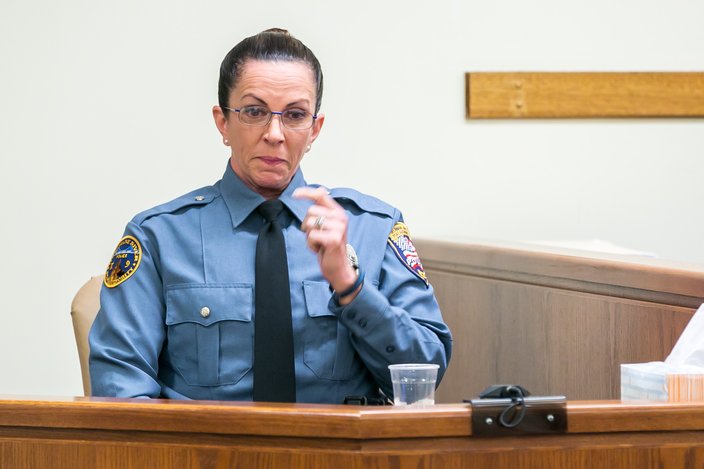 Delaware River Port Authority K-9 Officer Constance Nicholson holds back tears as she recounts her memory of finding a body near the Cooper River believed to be that of Brendan Creato, while she testified Tuesday, April 25, 2017, at Camden County Superior Court in Camden.

After putting Kauen in his tracking harness, she pulled on her jacket. As her voice cracked and she sobbed softly, Nicholson testified she had taken the jacket to shield the missing boy from the morning cold.

She had to stop for a moment to collect herself.

Next, she explained that a red slipper, retrieved from the Creato apartment by a gloved officer, was used to give Kauen a tracking scent.

On the first try, Nicholson and the dog came up empty after about 30 yards. Rested and watered, the tracking team began again, this time heading in a different direction, straight down Cooper Street, a tree-lined residential street which ends with a T-intersection at Cooper River Park.

By then, Nicholson testified, Kauen was visibly excited, panting harder, his nose to the ground, not searching the air, but on a track.

He dog pulled her along, across South Park Boulevard, and down a paved path, she told the jury. The German shepherd cut through woods, down a path and then broke into a field. At the end of the field, it pulled down a path to a creek. 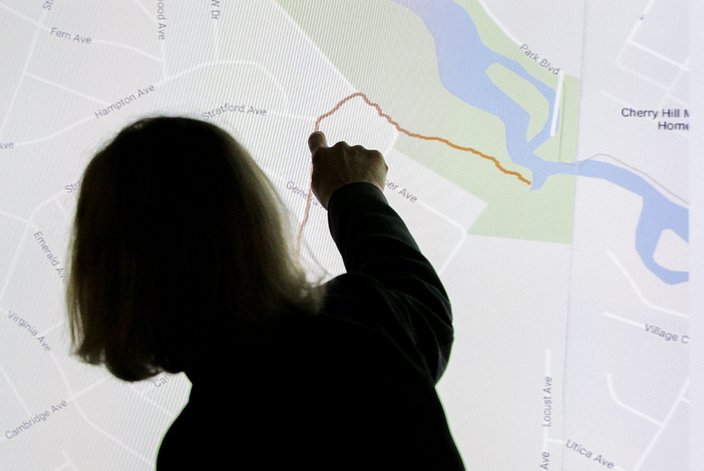 Camden County Assistant Prosecutor Christine Shah indicates a route that K-9 Officer Constance Nicholson and her dog took while searching for Brendan Creato on the morning of Oct. 13, 2015. This is one of many pieces of evidence shown during court on Thursday, April 25, 2017.

The pulling let up and the dog went right, with Nicholson following.

But a DRPA supervising officer, who had turned left, soon got Nicholson's attention.

Breaking into tears for a second time, the officer testified she saw "a small child" resting in the creek, his face down on a rock just beyond a large tree, near the creek's bank.

As the officer spoke, Lisa Creato also began weeping from her seat a few rows back in the courtroom. Her husband stared straight ahead. 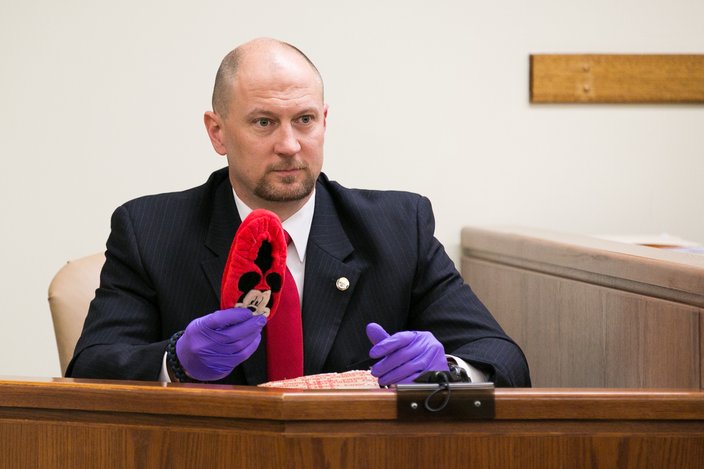 Camden County Prosecutor's Office Detective Joseph Gurcik holds up a slipper that was found in David 'DJ' Creato's apartment, which is the match to the slipper used by K-9 Officer Constance Nicholson's dog to help track the scent of Brendan Creato, Thursday, April 25, 2017, at Camden County Superior Court.

Testimony in the afternoon also focused on details of the apartment, a bloody tampon, a search of a truck used by DJ Creato and owned by his contractor father, and the locks on the two doorways leading to the second-floor apartment.

The property manager for the apartment rented by DJ the April before his son died spent about 10 minutes answering questions from Assistant Prosecutor Christine Shah about the condition of the locks and the door frames leading to Creato's apartment.