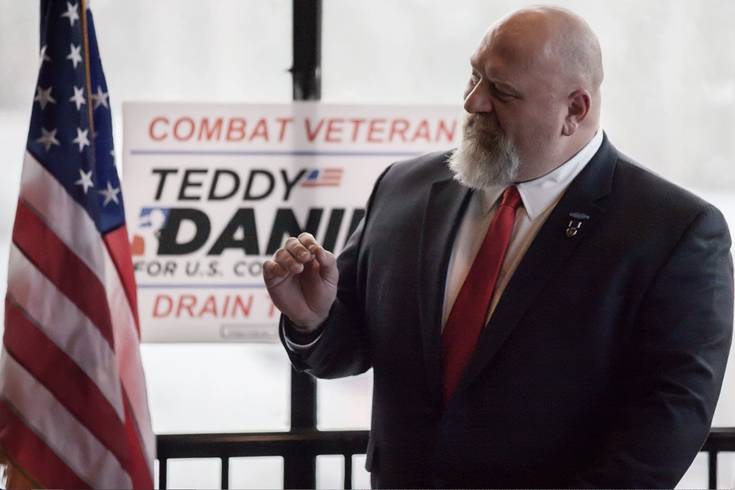 Teddy Daniels, a Republican candidate for Pennsylvania lieutenant governor, was court-ordered to stay away from his wife after she filed this week for protection. The woman alleged Daniels threatened her and their child.

A protection from abuse order reportedly was issued against Pennsylvania lieutenant governor candidate Teddy Daniels on Tuesday after his wife alleged she and their child were physically and mentally abused by Daniels.

The far-right candidate and military veteran, one of nine GOP contenders in a crowded primary race, has been ordered to stay away from his home in Lake Ariel in the northeastern part of the state, according to court documents obtained by Rolling Stone.

Daniels, 47, has led an abrasive campaign that leans heavily on his support for former President Donald Trump. He attended the Jan. 6 riot at the U.S. Capitol and has continued to push the baseless claim that the results of the 2020 election were the product of widespread fraud, which has been disproven in courts and never demonstrated with credibility anywhere else.

Daniels' wife alleges, among other incidents, she was grabbed by the shirt last August as Daniels "threatened to kill (our) family dog in front of our children." Her allegations against Daniels were handwritten in a three-page petition seeking a protective order, Rolling Stone reported.

His wife wrote that she feared what Daniels might do to her and her child, adding that their home contained multiple firearms and knives. Daniels was listed in court documents as 6 feet 4 inches tall  and weighing 360 pounds.

The office of lieutenant governor is relatively limited in scope, and its only official duties include serving as president of the state senate and chairing the Pennsylvania Board of Pardons, although many who hold the position take on other initiatives. In the event that the governor becomes disabled or dies, the lieutenant governor is next in line as chief executive.

Rolling Stone had reported in February about allegations of abuse and mistreatment by Daniels against two former romantic partners, including his ex-wife.

In response to the negative press, Daniels allegedly accused his current wife and her family of talking to the publication about his past relationships. Rolling Stone denied having any contact with the woman and said that court documents were obtained from a family friend of the couple.

Daniels' wife described her husband being "always angry at me" and said she had often asked him to drop out of the campaign because of the pressure it was creating at home, the Associated Press reported. She added that Daniels verbally abused their son and threatened to kick them both out of the house if he loses the election.

Pennsylvania State Police reportedly visited Daniels' home on Sunday for a wellness check and urged him to stay elsewhere for the night. When state police left, Daniels became "verbally abusive" and wanted to know who had called authorities, his wife wrote in her letter.

The woman alleged Daniels tried to stop her from going to the courthouse the following morning to file for emergency protection from abuse. The Wayne County judge granted that request on Monday and extended the protections with a second order on Tuesday. Daniels has been barred from the couple's home and from contacting his wife, who was given temporary custody of their son.

Daniels also is temporarily barred from possessing firearms while the court order remains in effect.

In response to the accusations, Daniels has refused to drop out of the Republican primary and has taken to Twitter and Facebook to defend himself against the allegations.

"I have been hit with numerous cannon balls at point blank range," Daniels said Wednesday during a live broadcast on Facebook. "Folks, I ain't dropping out of nothing, and I ain't quitting."