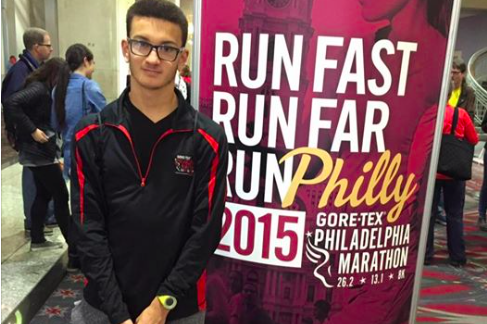 Last Sunday, thousands of people from across the United States took part in the 22nd annual Philadelphia Marathon, a joyous event that offered options for both intermediate and advanced runners.

The main, full marathon (26.2 miles) began and ended on the Benjamin Franklin Parkway as runners powered along the Schuylkill River into Manayunk, University City and Old City. Eliud Ngetich, of Florida, took the male top prize with a time of 1:03:37.05, while New Mexico resident Aliphine Tuliamuk-Bolton clocked in at 1:09:47.10 to claim the female honor.

Then there was Evan Megoulas, a teenager from Lebanon County. He was supposed to participate in the GORE-TEX Philadelphia Half Marathon, a daunting 13.1 miles. Megoulas, a runner on the Palmyra High School Cross Country Team, invited his whole family out to greet him at the finish line, AOL.com reports.

As every other racer passed the finished line and there was no sign of Evan, the Megoulas family grew concerned. Peter, Evan's brother, reached out to Philadelphia police to see if something was wrong.

It turns out Evan was fine, just well on his way to running an unintentional full marathon.

Officers Clarence Mason and Eric Leary of the 18th District spotted the teen chugging along in Manayunk. They notified Evan that he appeared to have taken a wrong turn, but Megoulas vowed to finish the 26.1-mile circuit, anyway. To make sure he was okay, officers followed alongside him on bikes for a six-mile stretch to the Philadelphia Museum of Art.

In the end, Megoulas completed the marathon in 5:23:11, posing for pictures with supportive Philadelphia police officers and forever gaining a psychological edge to estimate the fatigue factor in marathons.