After looking at Netflix and Amazon on Monday, let's take a look at the other half of our bracket... 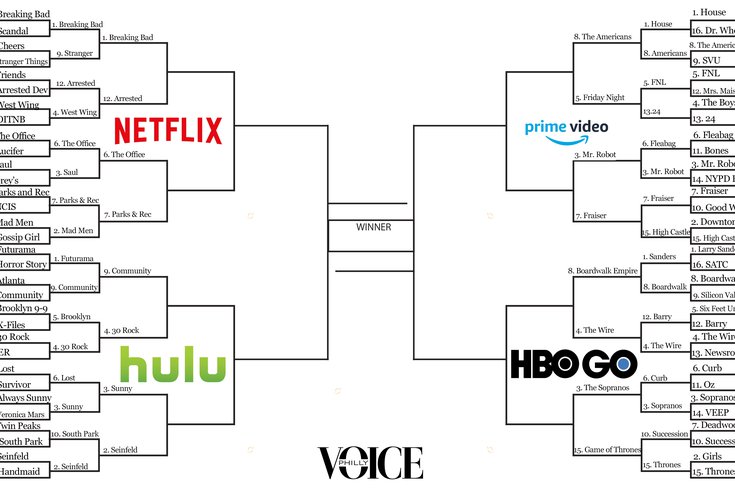 It's time to vote on the second half of our Sweet 16, and there are some true giants of television doing battle in the HBO and Hulu regions, as we try to determine which TV show is the best choice to stream while self quarantined.

Shows that have legendary status, from Seinfeld to Game of Thrones are represented in this half of our final 16. From critical darlings like The Wire and The Sopranos to fan favorites like It's Always Sunny in Philadelphia and 30 Rock, there are some really tough decisions here.

To recap our methodology, we took 64 teams, 16 from each of four regions (Netflix, Hulu, Amazon Prime and HBO) and threw them onto a bracket (seeded using Rotten Tomatoes viewer ratings). You can view the full original bracket right here.

Yesterday we started taking votes for the Netflix and Amazon Prime  regions. You can still make your voice heard right here.

Below, place your vote as we try and determine which TV show is the best option to stream during self-quarantine. We've also included our sport's staff's pick because, well, without sports to watch we are all streaming along with you... 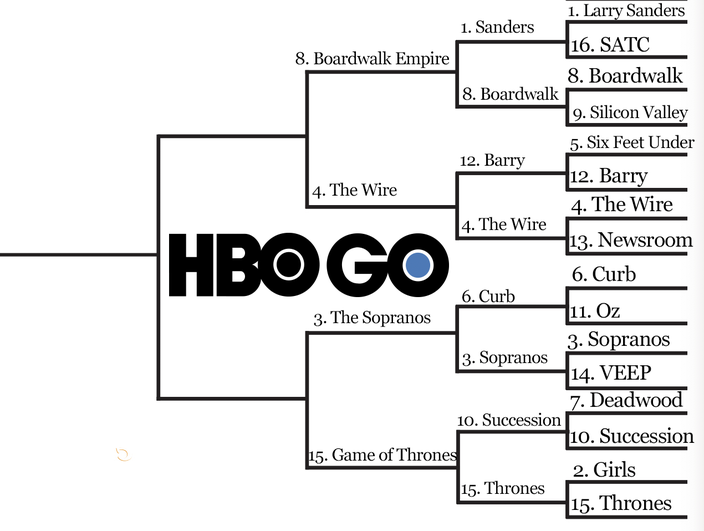 Kyle Neubeck: How is The Wire a 4 seed again? This is a laugher.

Matt Mullin: The Wire is one of the best shows of all time and has to be the favorite not only to win this region, but to win the whole damn thing (right next to Breaking Bad). It’s just a better show, plain and simple.

Evan Macy: Game of Thrones was great. The Sopranos is legendary. I have watched the series through at least twice and it is always ripe for another rewatch. It's a show that has everything, that has influenced everyone and is my personal GOAT TV show.

Kyle: The primary difference between these two great shows with divisive endings is that you could only dislike/misunderstand the Sopranos ending if you didn’t pay attention during the final season.

Matt: This is likely going to be met with a lot of hate because of how iconic and game-changing a show Sopranos was and how revolutionary Tony Soprano was as an anti-hero television character. And sure, he may have been first, but Game of Thrones had no less than SIX Tony Sopranos. Everything Sopranos had, GOT had, and had more of it. Power struggles? The entire show was one big battle for the same chair, just in Westeros instead of North Jersey. Cross-town rivalries? Try cross-continent rivalries. Family squabbles? GOT had the freakin’ Lannisters. Main characters trying to find themselves? Pretty much all of them. Plot twists? Check. Betrayals? Check. Executions? Constantly and quite graphic. Shocking deaths? GOT made it’s name by killing off main characters. And this is all before you even get into the size and scope of the story that takes place within the GOT universe — not to mention set pieces like Battle of the Bastards, Hardhome, and the blowing up of the sept, which might be the best opening scene to an episode in television history. While Sopranos was a first-of-its-kind show, GOT was groundbreaking in its own ways, and we may never see another show quite like it again. You can certainly make the argument that The Sopranos did more with less, but Thrones did more with more. And sometimes, more is more.

MORE: Vote in the Netflix and Amazon Regions 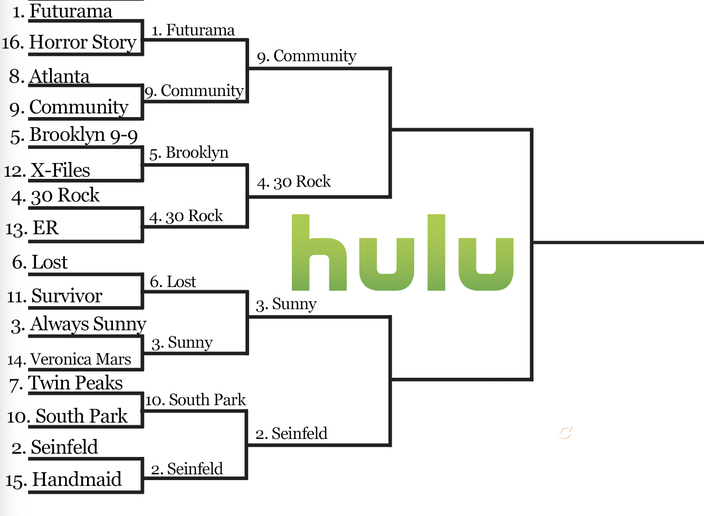 Evan: This one is surprisingly close in my head. Both are fantastic and laden with new jokes every time you watch. I happen to own three seasons of Community on DVD, and for a while it was the show I watched on airplanes or when the power went out (on my laptop). I love the meta humor and it's obsession with parody. The Chicken Tenders episode, the first two paintballs, Pillowtown vs Blanketville. Troy and Abed are the love affair of our times.

Matt: Community is a fine show and I’ve watched every episode at least twice. 30 Rock is an all-time show and, thanks to my wife’s obsession with it, I’ve seen each episode at least five times and can quote more of it than I’d probably like to publicly admit. Community had some classic episodes and incredibly funny running jokes, but 30 Rock had that on an almost weekly basis, and is one of the best-written comedies I’ve ever seen.

2. Seinfeld vs. 3. It's Always Sunny in Philadelphia

Evan: I don't have much to say on this one. The last few seasons of Always Sunny have been kind of hard to watch. Seinfeld went out on top after nine seasons. That matters, as Sunny continues into like, year 20.

Kyle: I would have preferred to be able to vote for It’s Always Sunny over some of these other comedies I’ve never seen, but it goes down here. Seinfeld has been in syndication for decades and still has tons of episodes that are must watch if you happen to see them on.

Matt: I love Always Sunny as much as the next guy, but I grew up watching Seinfeld. It’s one of the best sitcoms of all time and deserves to advance here. It will be interesting to see if the hometown bias plays a role...