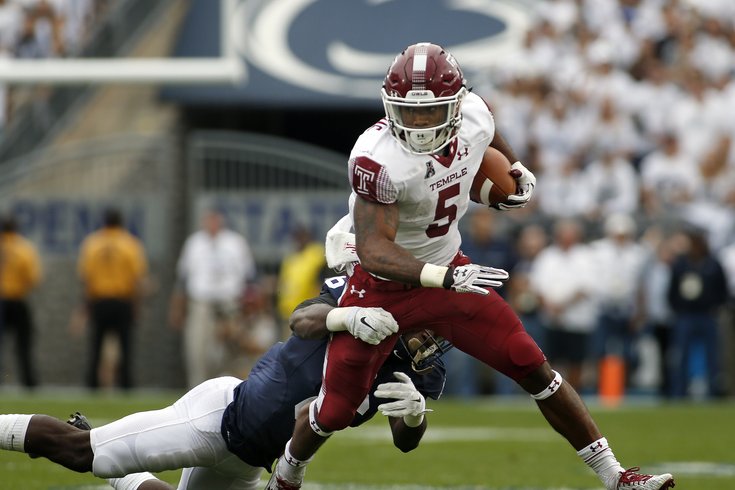 Temple's Jahad Thomas (No. 5) gets to the outside as Penn State's Malik Golden (No. 6) takes him down during the first half of a college football game in State College, Pennsylvania, Saturday, Sept. 17, 2016.

If the four teams chosen to compete in the College Football Playoff were picked based on academics, Temple would be contending for a title.

The think tank New America has re-ranked each school in the top 25 rankings of college football for the past three years, reshuffling the programs based on the players' academic performance instead.

The Owls snuck into the top 25 this year after turning their season around, winning the school's first conference championship since 1967 with a 10-3 record and earning a spot in the Military Bowl.

Penn State may have beaten Temple on the football field earlier this season, but the university fell behind the Owls in New America's rankings. The Nittany Lions weren’t far behind, coming in fifth — the same ranking they got in the actual CFP rankings that left them on the outside looking in at a chance to compete for a championship.

As it has done for the last two years, New America compiled the rankings by beginning with each school’s football graduation success rate (GSR). The GSR is a NCAA measure that, unlike the federal graduation rate, doesn’t penalize schools for having players who transfer or leave for the pros–as long as those players depart in good academic standing. The higher the school’s graduation success rate, the higher they start out in New America’s rankings.

Schools lose points for graduating football players at different rates than their overall male student body. To compare players to students, New America relied on federal rates, since there’s no GSR for the general population. (The service academies do not provide a federal rate, which means Navy, No. 25 in football, is excluded from the ranking.) The bigger the discrepancy, the harsher the penalty. Even if a school graduated football players at a higher rate than the overall male student population—and five schools in the top 25, Stanford, Clemson, Louisville, Temple, and Western Michigan, did—the difference was counted as a penalty. New America does not want to reward schools with low overall graduation rates. Schools were awarded an added bonus for having high overall rates.

You can see the full rankings via Time here.