University getting $6M in state loans for sustainability project 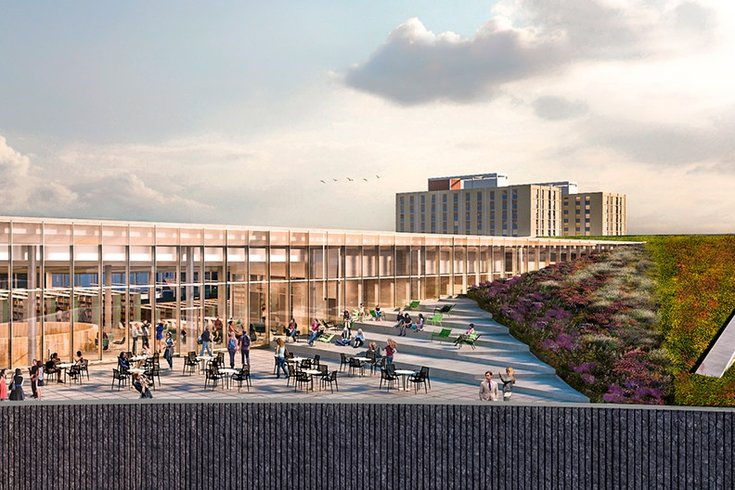 An artist's rendering of the roof garden planned for Temple University's new library.

Temple University will receive millions of dollars in state loans to install one of Pennsylvania's largest sustainable green roofs on the school's new library.

Last month, Gov. Tom Wolf announced a $6,747,933 loan by the Pennsylvania Infrastructure Investment Authority (PENNVEST) to Temple for the new facility. Temple gave more details on how the money would be used for the library — set to be completed in the Fall 2018 — earlier this week.

According to a press release, these efforts will help "stop erosion and sediment runoff from entering the already burdened public sewer and stormwater systems serving North Philadelphia." The roof will also serve as a thermal barrier to regulate the temperature inside the building.

Temple says PENNVEST's loan will actually save them money, too, with a 1 percent interest rate and a 20-year term instead of a more standard 30 years.

Sustainability and frugality aside, it's the outdoor space for studying and collaborating that will likely get current (and future) students most excited. Here's how Temple describes the roof garden:

A terrace and seating area outside of the library’s fourth-floor reading room will face a portion of the roof garden that will be sloped upward like a hillside to meet the actual roof, which will be almost entirely covered with about a dozen different low-level plantings.

The plant material, with a color scheme of blue, green, purple and white, will include a variety of grasses and sedum, as well as flowering perennials such as coneflowers, coral bells, liatris, purple poppies and yarrow. In addition to absorbing stormwater, the green roof will act as a thermal barrier to help regulate building temperature.

The New York firm Snøhetta is behind the design for the library, which will rise in the spot of the razed Barton Hall in the center of the school's main campus.