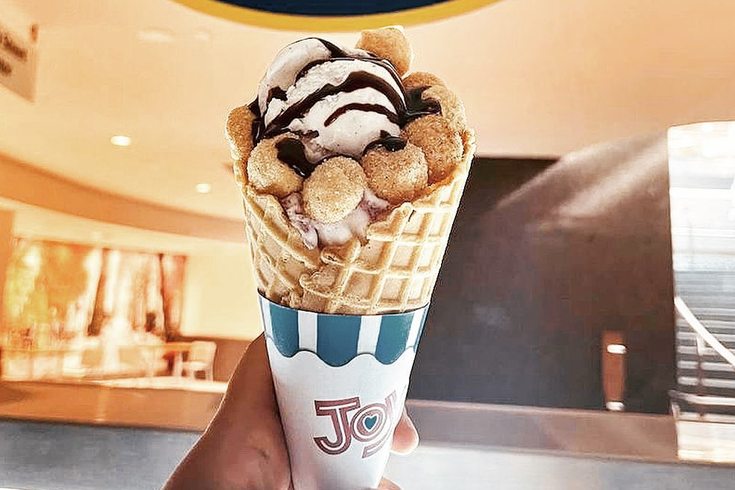 The Termini Bros. inside the Concourse at the Comcast Center recently began serving Bassett's ice cream topped with some of the baked goods for which Termini's is known. This waffle cone is topped with tiny Amaretti cookies.

Combat that end-of-summer heat with help from a beloved local bakery now serving unique frozen desserts at one of its locations.

The Termini Bros. location in the Concourse at the Comcast Center started scooping ice cream earlier this month, offering customers a variety of flavors, sauces and toppings.

MORE: Historical Society set out to make video about ice cream, but went viral for stumbling upon details of murder

The ice cream is made by Bassett's, the fifth-generation, family-owned Philadelphia company that started in 1861. Bassett's operates a retail location inside Reading Terminal Market, and its ice cream is served by ice cream shops, restaurants and other businesses in the city and region, including the Termini family's new Nonna and Pop's shop, an ice cream and pastry shop at 1514 S. Eighth Street in South Philly.

While the usual jimmies and whipped cream will be available, Termini Bros. also has bakery-inspired toppings such as mini Amaretti cookies and crumbly chunks of cannoli shells, brownies, chocolate chip cookies and pizzelles. Sauces include butter caramel, tiramisu and raspberry.

The Termini family continues to operate its original bakery at 1523 S. Eighth St. in South Philly, along with locations in Reading Terminal, Packer Park Shopping Center and the Live! Casino and Hotel.

Termini Bros.' location in the Comcast Center is situated in the Concourse in the lower level of the building. Along with Termini Bros., there are other casual dining options like Di Bruno Bros., Panda Express, Philly Steak Co., Tokyo Sushi Catering and Starbucks.

The Concourse is open 10 a.m. to 5 p.m. Monday through Friday, so Termini'is the perfect place to stop on a lunch break or to simply escape the hot Center City temperatures to enjoy a frozen treat.