Thanks to mice, 2017 could be a bad year for Lyme disease in the Northeast

As if I needed more motivation to continue a two-year crusade against invading vermin that's spanned two different apartments, a new report from NPR suggests that mice could lead to an uptick in Lyme disease cases in 2017.

NPR spoke to researchers who've studied Lyme for years, and they said a plague of mice (known carriers of the disease) in New York's Hudson Valley in the summer of 2016 is an early warning sign of a potential Lyme outbreak this year in parts of the Northeast.

Researchers with the Centers for Disease Control and Prevention added that Lyme has been on the rise over the past few decades, especially in the Northeast. The CDC reports about 30,000 official cases a year, but researchers think that number is actually closer to 300,000. And a map of reported cases in 2015 does, uh, not look good for the Philly region. 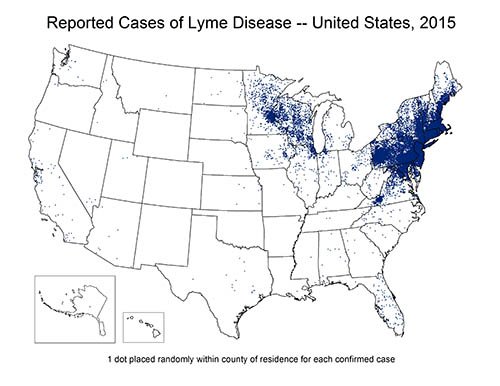 Centers for Disease Control and Prevention/Source

A map of reported Lyme disease cases in the United States in 2015.

Here it is again, in case you missed it: 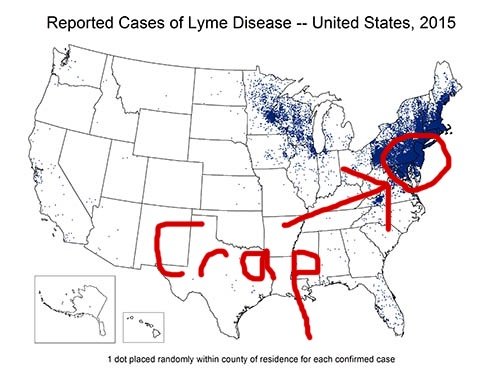 Here is the map of reported Lyme disease cases in the United States in 2015, with emphasis added to show cases in the Philly region.

Why the surge? Researchers said a number of factors contribute to the trend, including climate change. But another big reason spans back more than two centuries, when European settlers came to America and cut down many of the forests for commercial use.

Since then a lot of the forest has come back — but it's not the same forest as before, he says. Today it's all broken up into little pieces, with roads, farms and housing developments.

For mice, this has been great news.

"They tend to thrive in these degraded, fragmented landscapes," Ostfeld says, because their predators need big forests to survive.

Without as many foxes, hawks and owls to eat them, mice crank out babies. And we end up with forests packed with mice — mice that are chronically infected with Lyme and covered with ticks.

People built houses next to these patches of forest, thus becoming neighbors with mice that are covered in ticks and infected with Lyme. Wonderful.

Before you freak out, it should be noted that Lyme disease is treatable with antibiotics, but it can spread to the heart, joints and nervous system if left untreated. So catching it early helps a lot.

Symptoms include fever, fatigue, headaches and a skin rash where the tick has attached to the body. To prevent ticks, the CDC recommends using insect repellent and making sure to do a tick check after going outdoors.

You can read more about Lyme symptoms and prevention here, and go read the full NPR report here.