The magic-themed bar is hosting plenty of other events this month, including pumpkin carving and a costume contest 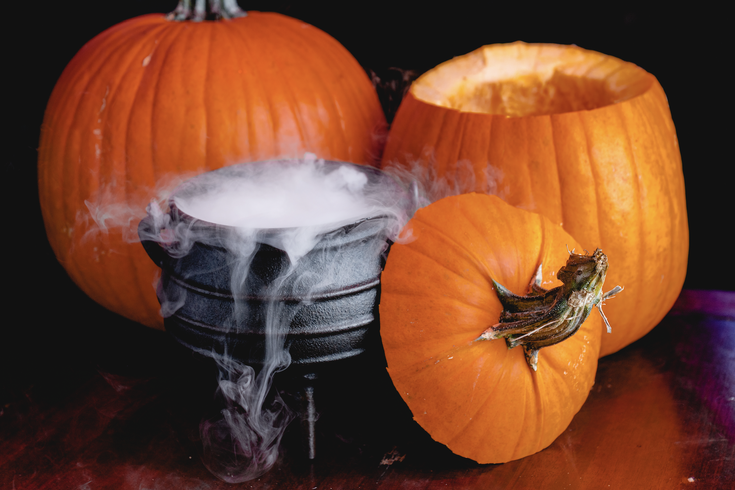 The Cauldron, the magic-themed bar that opened in Midtown Village earlier this year, is celebrating its first Halloween season in Philadelphia with a full lineup of spooky events and experiences for people of all ages. Check out potion-making, pumpkin carving, and bottle painting, as well as Hocus Pocus and zombie costume parties.

The Cauldron, a magic-themed bar in Midtown Village, is celebrating Halloween with a full month of spooky events and experiences for people of all ages.

The Cauldron opened its doors at 1305 Locust St. in May and is inspired by the world's most popular fantasy tales, including "Harry Potter." Festivities at the bar include potion-making, a drag brunch, a costume contest, pumpkin carving and a zombie dinner party.

"The Spooktacular Potions Experience" runs through Oct. 31 and costs $54.99 for adults or $44.99 for kids under 12. Each ticket for the nearly two-hour experience comes with a mug of HallowCream cider (available with or without alcohol), as well as the chance to brew two cocktails (or non-alcoholic mocktails).

Potions available to brew include limited-time creation "The Blood and Sinew." The drink is a raspberry vodka martini with spheres of white chocolate that are created through a process called "reverse spherification," which is similar to how bubble tea is made.

Customers will squeeze drips of "creamed unicorn" into a sodium alginate bath, which are "cooked" by a chemical reaction into squishy spheres that look a bit like maggots.

People of all ages are invited to The Cauldron on select weekend dates through the end of October for pumpkin carving. Sessions are 45 minutes long and include carving materials and a pre-shelled pumpkin. Alcoholic or non-alcoholic cider will be available for purchase.

Pricing is $20 for children and $25 for adults, though there is a two-ticket minimum required. Pumpkin carving is available each Saturday and Sunday, with the exception of Sunday, Oct. 16.

Guests are invited to step into a fantasy land filled with magic and potions during "The Dungeons and Drag Queens Brunch" on Sunday, Oct. 16 from 11 a.m. until 2 p.m. The event is hosted by Brittany Lynn of Philly Drag Mafia and costumes are strongly encouraged. Tickets start at $20 and include a welcome drink of prosecco or rum cider.

Just weeks after Disney released the long-awaited sequel to its 1993 classic Halloween film "Hocus Pocus," The Cauldron will host "Night of 100 Winifreds" on Friday, Oct. 21 from 8 p.m. until midnight. Fans of the film are invited to a party to screen the original movie and take part in a Winifred-themed costume contest. Tickets are $15, with special group deals available.

For those looking to get crafty this spooky season, head over to The Cauldron on Wednesday, Oct. 26 from 8 to 10 p.m. for a bottle painting event featuring Crystal Head Vodka. For $25, guests will receive an empty vodka bottle, painting supplies, a welcome cocktail made with the vodka, and a complimentary Crystal Head shot glass.

To wrap up the season, The Cauldron is hosting a zombie dinner party with movie trivia and a costume contest on Thursday, Oct. 27 from 7 to 11 p.m. Tickets are $10, with group table seating for an additional fee. Once seated at a "grave site," guests can watch clips from classic zombie flicks while feasting on zombie-themed foods and cocktails. There will be zombie-themed trivia at 8 p.m., as well as prizes awarded for the costume contest.

Halloween at The Cauldron