The Supreme Court and gerrymandering: what it means for Pennsylvania

A political gerrymandering lawsuit heard Tuesday by the U.S. Supreme Court could have implications on Pennsylvania's congressional districts, which are considered among the most gerrymandered in the country.

But experts say any ruling is unlikely to impact the 2018 election in Pennsylvania, even if the Supreme Court determines that state legislative districts in Wisconsin are unconstitutional.

The Supreme Court is considering a case that claims Wisconsin legislators overstepped legal boundaries by redrawing districts to favor Republicans. A decision is anticipated early next year.

But the decision will almost definitely come too late to impact Pennsylvania congressional races in 2018, including in the Seventh Congressional District, which CNN labeled the worst gerrymander in the nation.

"I can't really imagine it would have any effect on the 2018 elections, as any Supreme Court decision would come only a few months before those elections," said Nicholas Goedert, a Virginia Tech professor who has researched gerrymandering extensively. "It would take quite a while for other cases to be adjudicated."

Partisan gerrymandering enables a political party to enhance its representation to a level that far exceeds its actual level of statewide support. The practice is growing, and more effective, and aided by technology and the availability of lots of data in carving up districts.

Across the country, Republicans have used political gerrymandering to enhance their power in many states, though Democrats also have employed it.

The process leads to meandering districts that look like the Seventh district, which stretches into five counties. The seat has been held since 2001 by Republican Pat Meehan, who has drawn a field of Democratic challengers, including state Sen. Daylin Leach of Montgomery County.

If the Supreme Court rules the Wisconsin districts are unconstitutional – and provide a standard by which to measure partisan districts – it could force Pennsylvania to redraw its congressional lines.

That standard would provide a basis for a legal challenge of Pennsylvania's districts. But such a challenge first would have to work its way through the courts.

Despite a challenge being filed in Pennsylvania court in June, there's no guarantee that process could run its course in time for the 2018 election.

"Lawsuits take time," Leach said. "I am very skeptical that this will impact the 2018 lines. However, there is enough time for them to impact the 2020 lines."

There also is no guarantee that the Supreme Court will deem the Wisconsin lines unconstitutional. Upholding them could be a decisive blow to political gerrymandering challenges across the country.

The Supreme Court last ruled on political gerrymandering in 2004, when a trio of Pennsylvania Democrats alleged the GOP-controlled state legislature had drawn up congressional districts to favor Republicans.

""People's voices aren't being represented in their legislatures. The legislatures in heavily gerrymandered states do not reflect the actual political opinions of their constituents." – Lee Hachadoorian, Temple University professor

In a 5-4 decision, the court declined to outlaw the practice. But Justice Anthony Kennedy, in a concurring opinion, left room for further consideration.

The decision on the Wisconsin case – Gill vs. Whitford –  likely hinges on his vote.

Leach, an outspoken critic of political gerrymanders, arrived outside the Supreme Court at 3:30 a.m. Tuesday to ensure he got a seat to hear oral arguments. He left intrigued by Kennedy's line of questioning.

"Justice Kennedy asked a number of questions, one of which got to the heart of the matter," Leach said. "If they reflect his thinking accurately, the questions are cause for optimism for people like me, who want to stop this political gerrymandering."

Kennedy asked Misha Tseytlin, the attorney representing Wisconsin, whether a hypothetical statute would be constitutional if it required Wisconsin's districts to be drawn as advantageously as possible for the GOP, Leach said. After being pressed, Tseytlin said no.

"Then Kennedy said, 'Then why is it constitutional to do the exact same thing, for the exact same reason, just because you don't say it ahead of time?'" Leach said. "I thought that was right on."

READ THE TRANSCRIPT: Oral arguments in Gill vs. Whitford

A Supreme Court ruling that Wisconsin's legislative districts are constitutional may not necessarily sink the ongoing challenge in Pennsylvania, however.

"There's always a possibility that the Supreme Court does not step in and does not make a ruling that would apply universally," said Lee Hachadoorian, a geography and urban studies professor at Temple University. "But we could end up with a ruling in Pennsylvania that does rule that partisan gerrymanders are unconstitutional."

Unlike in other states, the Pennsylvania challenge was filed in the state's Commonwealth Court, where the districts will be weighed against the state constitution. The plaintiffs, led by the League of Women Voters, believe that document provides broader protections of freedom of speech.

In a hearing Wednesday, a state attorney asked Senior Judge Dan Pellegrini to postpone all action until the Supreme Court makes its decision, according to PennLive.com. An attorney for the plaintiffs argued that the challenge should proceed.

Pellegrini did not immediately issue a ruling.

Both the Pennsylvania and Wisconsin challenges rely in part on a barometer known as the efficiency gap, which measures district competitiveness by comparing single district election margins across the state. 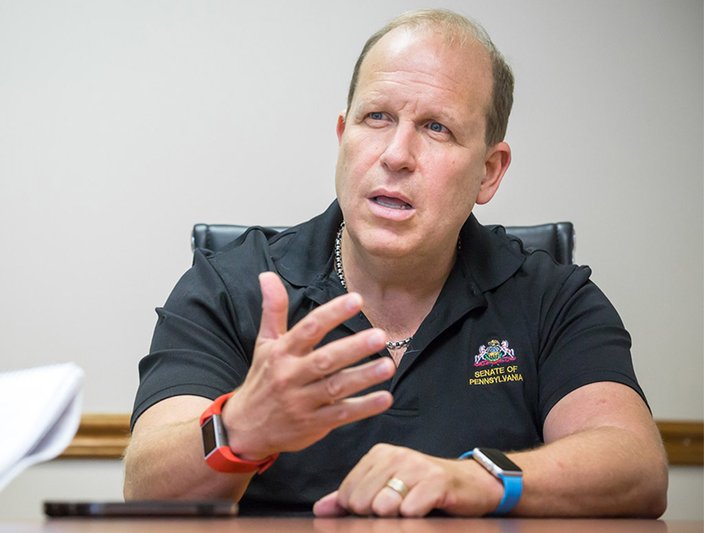 State Sen. Daylin Leach is running for Pennsylvania's Seventh Congressional District, often cited as one of the most gerrymandered districts in the country.

THE CLOCK IS TICKING

"People's voices aren't being represented in their legislatures," Hachadoorian said. "The legislatures in heavily gerrymandered states do not reflect the actual political opinions of their constituents."

In Pennsylvania, Democrats outnumber Republicans by a 5-to-4 margin among registered voters. Yet, Republicans hold 13 of the state's 18 congressional district.

"[Republicans] crammed the Democrats into five districts across the state and they split up the rest of the state for themselves." – Brian Gordon, attorney and Democratic commissioner in Lower Merion Township

Republicans first gained that margin in 2012 – the first election after lines were redrawn by the GOP-controlled General Assembly – despite only securing 49 percent of the statewide vote.

Prior to that, Republicans held a 12-7 advantage, having flipped the Democrats' own 12-7 edge in 2010. (Pennsylvania lost a congressional district following the 2010 census due to population loss.)

Another Pennsylvania challenge is being considered by a group of lawyers, mathematicians and voters, dubbed "Concerned Citizens for Democracy."

The Pennsylvania constitution requires state legislative districts to be contiguous, reasonably compact and equal in population. But it also stipulates that municipalities cannot be split "unless absolutely necessary."

"They crammed the Democrats into five districts across the state and they split up the rest of the state for themselves," said Brian Gordon, an attorney and Democratic commissioner in Lower Merion Township. 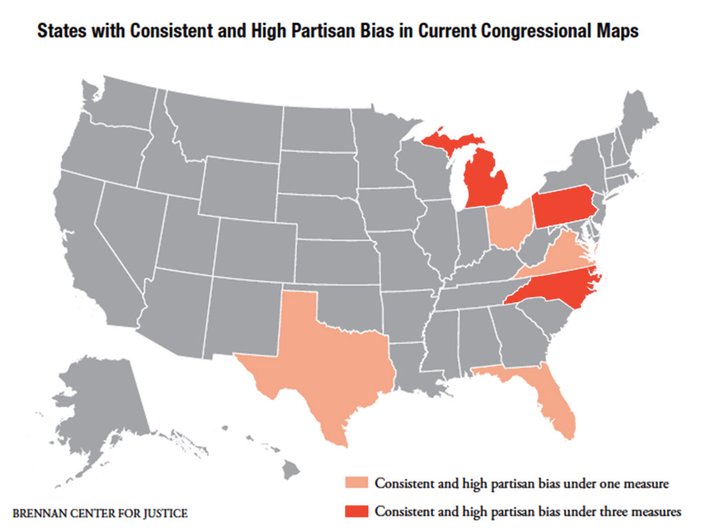 According to a report by the Brennan Center for Justice, three states – Pennsylvania, Michigan and North Carolina – consistently have the most extreme levels of partisan bias. “Collectively, the distortion in their maps has accounted for seven to ten extra Republican seats in each of the three elections since the 2011 redistricting, amounting to one-thirdto one-half of the total partisan bias across the states we analyzed,” the report said.

THE CLOCK IS TICKING

Even if successful, a legal challenge will not eliminate the "serious conflict of interest" that occurs when lawmakers have an opportunity to draw their own district lines, said Carol Kuniholm, the co-founder of Fair Districts PA.

"The Supreme Court decision would not be a silver bullet," Kuniholm said. "It would not remove the conflict of interest. It would certainly call attention – and it is now – to the extreme gerrymandering that is happening in states."

Her organization wants to amend the Pennsylvania constitution to require congressional and state districts to be drawn by an independent commission.

The 11-person commission would include four members from each major party and three independent or minor party voters. None of them can hold elected office.

But gaining such an amendment is a lengthy process as it would need to pass the General Assembly in back-to-back legislative sessions. Then voters would need to approve via referendum.

The clock is ticking to have any such commission in place by 2021, when both congressional and state districts are slated to be redrawn again.

Bills have been introduced in both chambers of the General Assembly. But despite bipartisan support, including 96 co-sponsors on the House bill, they remain in committee.

Kuniholm said it has been difficult to get Republican leadership to move forward.

"The leaders get to decide what bills get a hearing, what bills get scheduled," Kuniholm said. "It's gone from being a representative democracy to being a controlled process, which makes it really hard to get these bills moving."