They got married in a Walmart garden center

After vows were exchanged in an unusual setting, the haters tried to steal their day 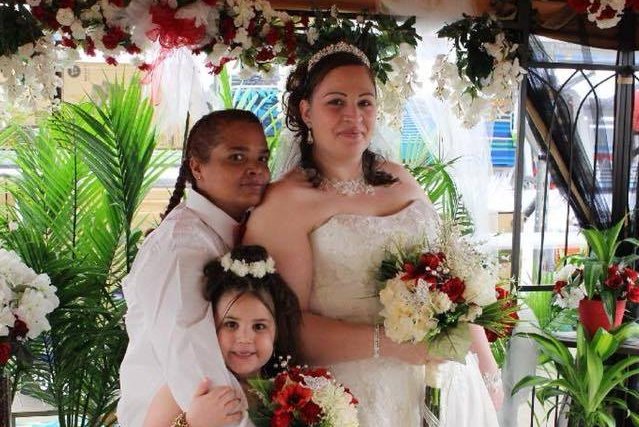 Leida Torres, right, and Chrissy Slonaker Torres were married at a Walmart store in York, Pa. on March 17, 2018.

A Facebook post over the weekend – “Someone for real got married in the Walmart garden section. Only @ a York Walmart” – drew quite a bit of attention.

Wait, people actually got married at a Pennsylvania Walmart? Yep. Leida Torres and Chrissy L. Slonaker Torres sure did. And it made news beyond Facebook. The local newspaper – the York Daily Record – wrote about the nuptials. (Support local journalism.)

The choice of venue isn’t all that unusual when you hear that Torres is a customer service manager at the Walmart Supercenter at the West Manchester Town Center in York County. That's where the couple met in 2015, which makes sense considering that Slonaker works there, too.

When it came time to craft the invitation list, they realized many friends wouldn't be able to attend since they were coworkers and Walmarts don't close. So, the decision was made to move the chapel to them, which is what brought some 100 people to the garden section this weekend.

When I called over to the store on Sunday night, Torres’ shift had just ended moments before, so she wasn’t there. She was tied up again at work on Monday, but her newlywed wife called to discuss the wedding and what happened afterwards.

"It was truly amazing to be with all our family from work. I've worked there for 14 years, so I've grown really close to them," Chrissy told PhillyVoice. "It made the day even more special since they could be there."

Their amazing day, however, turned a little sour after people reacted to a photo of the wedding taken by a customer.

The attention was "very overwhelming at first," but then some of it turned negative. There were mean comments about same-sex marriages, people claiming "we were too cheap to have a wedding anywhere else" and that we "must have been on drugs" to get married at Walmart.

"You can't just make assumptions about people. Getting married at Walmart wasn't a bad thing. It wasn't because we're cheap. Yes, we're both women, but love is love and there's no right or wrong to it." – Chrissy Slonaker Torres

"There was a bunch of hateful things," she explained. "But they didn't know the real story. When the [York Daily Record] story went out, the picture had gone viral already, but that story helped tell people what was really happening. It changed for the better after that, from negative reactions to positive."

She said they wished people would have taken a moment to learn the real story before spewing hate, though.

"Read the details. You can't just make assumptions about people," Chrissy said. "It wasn't a bad thing. It wasn't because we're cheap. Yes, we're both women, but love is love and there's no right or wrong to it. Don't judge books by their covers. When it comes to love and unconditional love, what Leida and I have is unconditional."

As far as weddings at Walmart locations go, Tara Aston – a spokeswoman for the Arkansas-based company – said "it's a rarity," but the fact that they met where they worked, and wanted to share the special day with co-workers and friends made it possible.

It's not as if there's a "How to get married at Walmart" manual out there, so the story of how this event came to pass gets even more interesting when you talk to the officiant who presided over the ceremony.

His name is Robb Green, and he's known around York County as The Marrying Mayor. That's for good reason.

As he explained on the phone Monday morning while en route to the courthouse with paperwork from Saturday's nuptials, he was mayor of Jefferson Borough in York County for 16 years and just retired as county controller in January.

"Their wedding was the 3,420th I've done," the 71-year-old proudly shared. He came recommended as the officiant by a longtime friend who was a Walmart security officer.

While a Walmart wedding strikes many as unusual, Green has been an officiant in other weird settings. He married a couple atop a Ferris wheel at the Jefferson carnival. (He was in one car, the couple was in the car next to him.) Another time, he presided over nuptials in a junkyard; the ceremony took place on a flatbed truck.

"I've done all kinds of weddings for all kinds of people, from the poorest areas of townIt  to what we call 'The Hill,' over by the York Country Club, in the millionaires' section," he shared. "I enjoy creating all kinds of families."

What impressed him most about Saturday – which brought together a mixed-race, same-sex couple, each with children – was the outpouring of support for the women.

"Everybody felt so positive about them. It was just an outpouring of sincere wishes that this family grows." – Robb 'The Marrying Mayor' Green

"Everybody must have really cared about these young ladies," he said, noting he was impressed by their employers' willingness to let them get married in the store. "I'm a Sixties idealist that works inside the system, a fiscal conservative but social liberal. I'm happy to do what I feel needs to be done to create all families."

After they filled out marriage documents in the employees' lounge, Green watched as the couple walked through the store so employees who couldn't go to the ceremony had a chance to see them.

"Everybody felt so positive about them. It was just an outpouring of sincere wishes that this family grows," he said. "People need to be inclusive, not exclusive. That's how the people that work there feel, and the way the youth are in York County and all over Pennsylvania.

"Things change, and they change for the better. It's just a matter of time when something like this will be just another blip in the world. Times are a-changing in York County, Pennsylvania."

As for the newlyweds, they're still busy at work in York County, but have plans for a honeymoon trip to Atlantic City in the near future.